The cockpit looks very simple with three small windows and inside it doesn’t seem very big. However, presumably, the pilot will have available some small handlers and to maneuver it and chase the convertible. The roof is not detachable unless you remove all the engine and propeller elements. 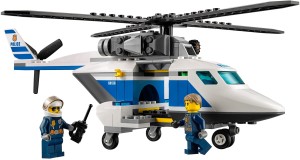 In the middle, the Heli is prepared with a small winch, that is controlled with a small knob, to the hang up the officer and catch the crock in movement (that’s a huge task for sure). On top the engine and the big propellers ensure that the aircraft has the appropriate power when it’s time to fly! 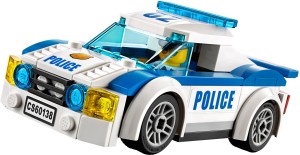 The cars are simply huge, looking slightly larger than the usual which give them a real cool look. Both have no side doors but at the same time present some nice details such as the ailerons at the back, the rims with an unusual design and the color scheme on both couldn’t be better.

Overall, it seems a quite interesting deal, especially if you don’t have a Police Helicopter. The three vehicles look great and the mini-figures are nicely accurate, especially the two polices with the darker suits. The set is already available on retail with a price around the forty dollars.