The Deep Sea Exploration Vessel is a 2015 summer set that belongs to the city sub-theme, deep sea exploration. It is the biggest set of this wave, presenting more than seven hundred pieces that will feature a sunken ship, the exploration Vessel, both of them with lots of nice details and a lot of additional stuff to enjoy.

The mini-figures are seven( four divers with different equipment, a deep sea diver, the Vessel’s captain and his assistant) and the big exploration includes also two mini submarines, four sharks of different colors or species, a red octopus and the sea bed itself represented with a light brown plate and a big grey rock. 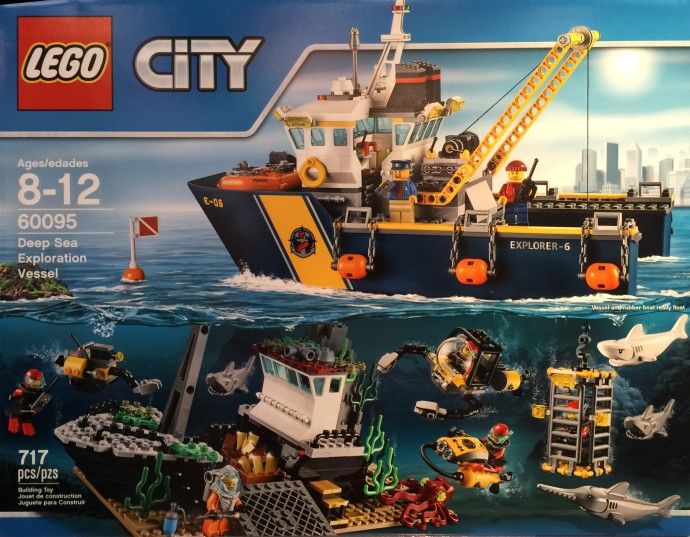 With all these awesome elements, it’s not easy to choose where to start. Having a look at the main ship, the first thing that comes to my mind is fat. The vessel isn’t very long and it is considerably large (I would say around twenty four studs) which gives the blue ship this unusual look.

In the bow, there is space for an orange lifeboat that includes space for a few mini-figures and a nice and powerful engine at the back with some handlers. Just behind it, is placed the ship’s bridge which looks considerably big, at least according to the set box picture, where it is possible to see besides the control panel and the handlers, plenty of space for almost all the crew. On the top there are plenty of details, namely five spot lights, communication antennas and best of all two nice chimneys. 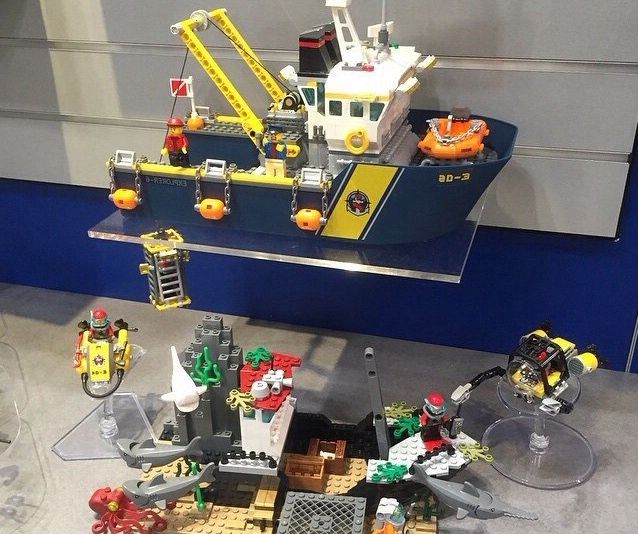 The ship’s hull seems a single structure, with a few places to put some stickers and six bars, on both sides, with buoys to protect it in the harbor. The back is a naked space where the water goes in and the big cage of the deep sea diver can be gently put in the water by the big winch. Built almost with technique pieces it is easily handled with a side knob and has more than enough strength to pull the cage and the diver with all its equipment.

The sunken ship is definitely pretty well designed. The major parts still there, including what’s left from the bridge and from the deck where a large hole shows a big compartment with at least two lost arches with probably a lot of precious jewels. The sea bed has plenty of sand which is nicely represented by a brown plate and besides that there are lots of additional elements like the different water plants, the big rock or even the different sharks (that’s definitely a danger area). 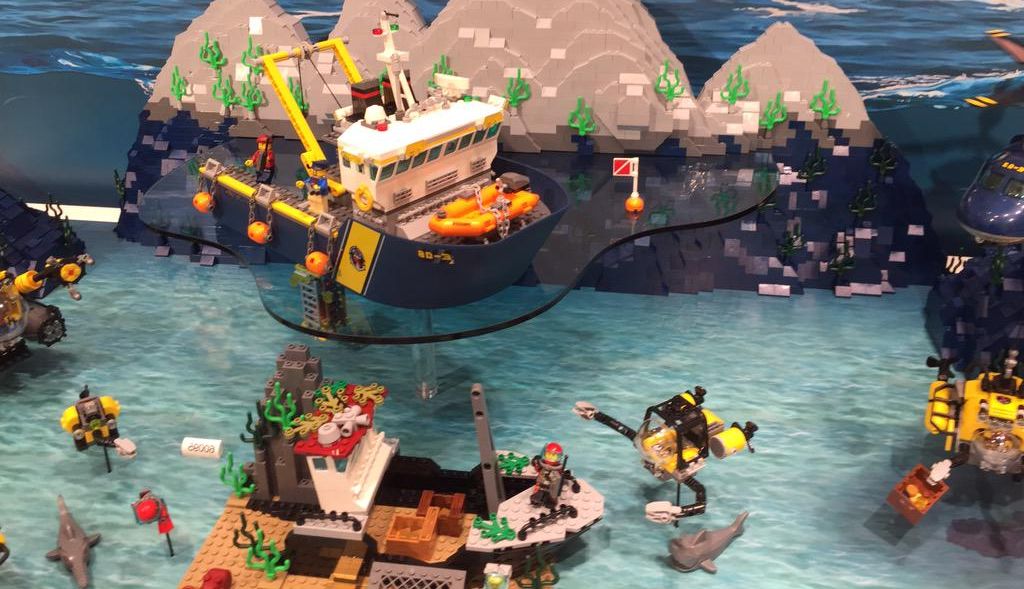 The mini submarines just like in other sets are nicely detailed but gladly are different from each other. One of them brings a small cockpit and a couple of claws at the front to grab or move some objects and the other one, slightly smaller seem to be just a transport vehicle that is handled through the back. Finally there is a smaller remote control sub with a single claw to help the other two.

Overall, this is a must for the deep sea adventures fans. The Vessel is nicely detailed with a great winch to play with, the mini-submarines are pretty well designed and all together give this set a huge potential in terms of playability. The mini-figures are pretty accurate, but divers seem to have similar suits, but at the first glance I don’t se any one particularly new or exclusive. The set will be available next June and should retail around the hundred dollars which seems a bit over priced if compared with other city sets.