Finally, the last unknown city set is seen, it’s was about time! The Coast Guard Plane is the last of the summer wave to be released. It will have exactly two hundred and seventy nice pieces and will bring two excellent vehicles: a fishing boat and a big cost guard heliplane. To give some action to the set there are also three nice mini-figures: two fishermen and the plane’s pilot!

Starting by the smallest, the fishing boat, it has the same average length of many other city boats thanks most of all to its white base, which gladly floats. In terms of features I would say that although its simplicity, there are a few nice things to point at. The bow has nothing much, only a couple of black safety bars.

But on the other hand, in the middle, the small cabin has an interesting windshield – made with the window usually used n the airports – but different from the usual. Inside there is room for the handlers, which in this case is just a steering wheel and just behind a couple of black bars are responsible for the communication antenna.

At the back, in the stern, the boat is reinforced with a long green structure that at the same time provides a better security to the fishermen. On both sides there is a clip where a nice big fishing rod can be attached. The set box as well as the blue water pieces suggest that the boat is having problems, that not even the powerful engine at the back, can solve! 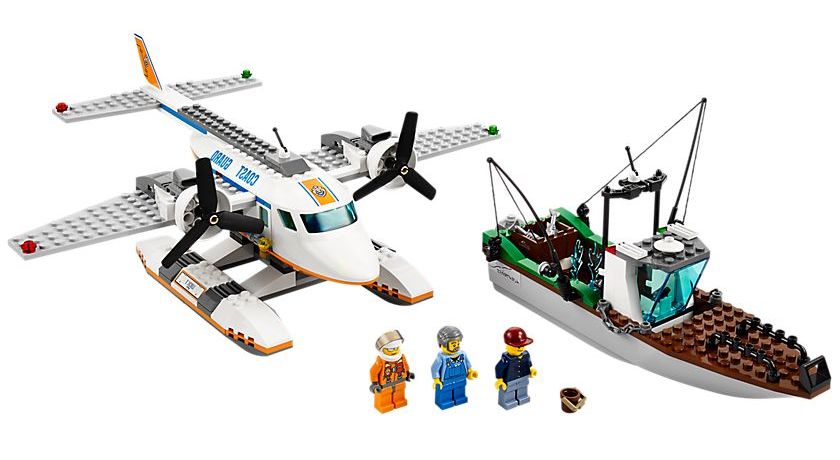 Called for a rescue mission, the masterpiece of this new set, the coast guard plane definitely will handle well with the job! Its big special landing gear allows alighting on water in almost every circumstance! It is quite long, completely symmetric and both sides are securely attached to the main body.

The cockpit is similar to other models and it has a blue wide windscreen that provides a clear view from all the inside. Here, the details are still unknown but it’s not easy to imagine some handlers, a control panel and a nice seat for the coast guard pilot. Just behind them, the two engines and their propellers look rather competent and very nice in terms of playability. 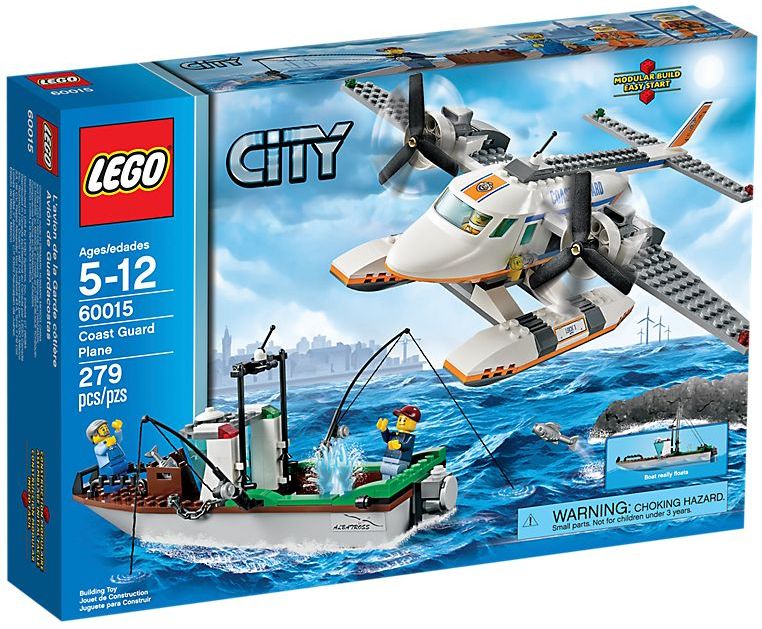 Finally, there are also other minor details that also look great! Examples? The small spotlights neat the cockpit, the antenna on the top, the presence lights in the wings (the wingspan of the plane is quite reasonable) and the even the two air entrance, just behind the propellers. The last city set to be revealed seem a good deal. The probable thirty dollars that it will cost is fair price, attempting specially to the number of pieces and the three mini-figures, although their usual look are always a good addition to the town!