The latest project to achieve the 10.000 votes that will give access to the first 2015 review stage is the 1969 Chevrolet Corvette. And looking at the pictures I would say that it definitely deserve the glory. It’s simply awesome, I especially like it in red and definitely, the original shapes are all there.

In the official gallery it’s possible to see all the bunch of nice details that the model brings, namely, among other things, the big engine and all its main elements, the highly detailed cockpit that include a nice steering wheel, five manometers, the naked gear box handle, a couple of door handles and even on the floor it’s also possible to observe the three pedals. 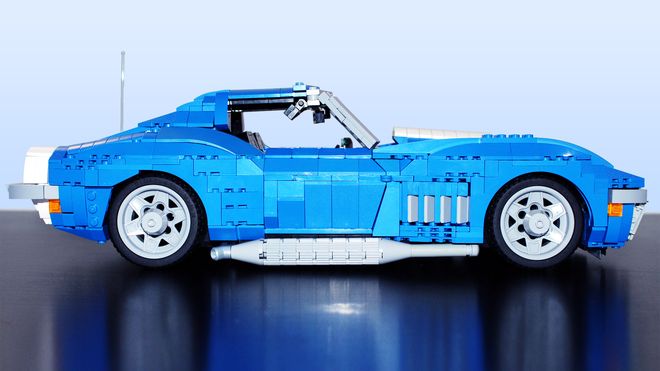 With a piece count around the 1500 (a bit more than the mini cooper or the VW T1 Camper), this project will gladly join a considerable list that includes: The Discworld, the Science Adventures, a Medieval Market Street, Disney Princess Frozen Elsa’s Ice Palace, Douglas DC-3, Bricksauria – Tyrannosaurus Rex, the International Space Station, the Golden Girls, The Legend of Zelda: King of Red Lions Play Set, and the RMS Titanic.