Six new Mighty Micros will make part of the first 2017 Super Heroes wave of new sets. Three of them were already revealed a few days ago and now we can see the other three. The new Marvel Micros are Wolverine vs. Magneto, Spider-Man vs. Scorpion and Iron Man vs. Thanos that join Batman vs. Killer Moth, Wonder Woman vs. Doomsday and Superman vs. Bizarro for DC Comics.

This targeted subtheme doesn’t usually impress me much but I must agree that some of them look really cute. Iron Man vs Thanos looks really cool and generically all the mini-figures looks rather pretty.

Batman: Rescue from Ra’s Al Ghul is a new Dc Comics super Heroes set that has just hit stores. With a small size, it has only two hundred and fifty seven pieces, and features a Batman’s Buggy, a desert hideout, four mini-figures (Desert Batman, Ra’s al Ghul, Robin and Talia al Ghul) with assorted weapons and some extra accessories such a small catapult or a Pit Area with a green toxic liquid.

And at the first glance, I really like this set. The buggy isn’t very big which is good in terms of handling and playability and Ra’s Al Ghul desert hideout has definitely three or four great elements to enjoy.

Having a look at Batman’s vehicle, END_OF_DOCUMENT_TOKEN_TO_BE_REPLACED

The Gotham City Cycle Chase is a new DC Comics set that has recently hit stores. This twenty dollars set has exactly two hundred and twelve pieces and features a batcycle, a motorcycle for Harley Quinn and three mini-figures with enthusiastic weapons: Deadshot, Harley Quinn and Batman.

The cycles are definitely the queens in this set! Both of them use extra large rubber tires (ok, the back one from Harley Quinn is not so big) and a technic structure as a base but each one them shows some different but awesome details at the same time.

On the batcycle, the END_OF_DOCUMENT_TOKEN_TO_BE_REPLACED

Three spectacular vehicles (a Harvester, a blue helicopter and a small tractor) and five mini-figures (Scarecrow, Killer Moth, a Farmer, the Blue Beetle and Batman) with assorted accessories is what the new Batman: Scare crow Harvest of Fear will feature, among a total of five hundred and sixty three pieces.

I like this Harvester! With a several brown shades and a lot of nice details, it shows a technic structure that is perhaps a big complex than usual in this theme probably due not only to the wheel axles but also to the rotating blades on the front which seems to be a connected mechanism. 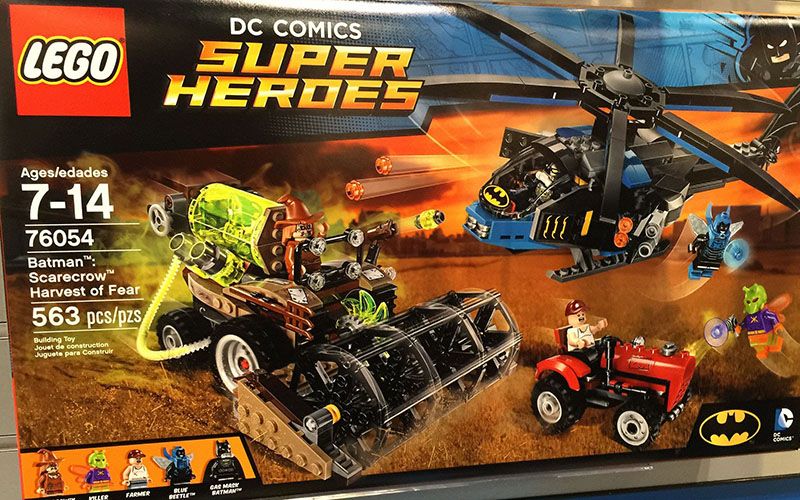 The big Batcave that was unveiled a few days ago was officially revealed by Lego, precisely in the 50th anniversary of the TV Series, showing a huge set with plenty of elements and details to enjoy and a lot of stuff to play with!

This Fantastic DC Comics Super Heroes set has exactly two thousand five hundred and twenty six pieces and, as you can see by the pictures, features a two level batcave, an helipad, the Waine Manor Section, three vehicles (a batmobile, a Batcopter and a batcycle) and nine mini-figures (Batman, Robin, Bruce Wayn, Dick Grayso, Alfred Pennyworth, The Joker, Catwoman, The Riddler and The Penguin) with an endless number of accessories.

The Batcave will be available on retail next March with a price around the two hundred and fifty dollars. Have a look at the press release and END_OF_DOCUMENT_TOKEN_TO_BE_REPLACED