Official pictures of the 2017 Lego Advent Calendars have been unveiled, showing a pretty good idea of these three seasonal sets. My favorite, as usual, is the City Calendar (the mini-figures as usual look really nice) but the other two have also plenty of pretty nice elements.

The Friends (41326) set is the smallest in terms of piece count with only two hundred and seventeen pieces and the biggest, the Star Wars (75184), have more than three hundred bricks. Like in past years, both will be available on General retail next October with prices between thirty and forty dollars. 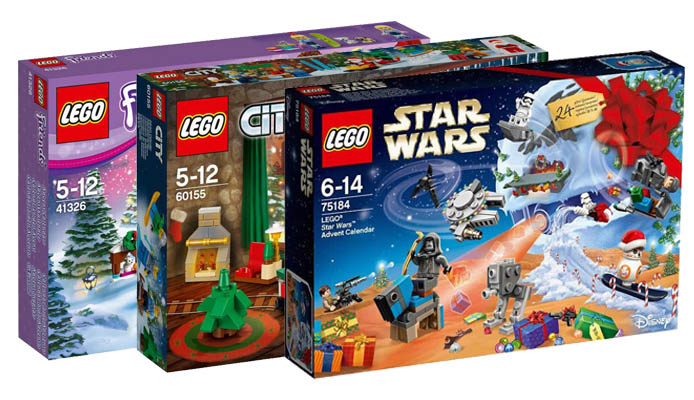 Have a look at the pictures! END_OF_DOCUMENT_TOKEN_TO_BE_REPLACED

In a time when the news about new releases aren’t much, let’s have a look at the 2016 Friends Advent Calendar that will be available next autumn. The set will contain around two hundred and eight pieces and will features just like the others, twenty four gifts and four new online surprises that can be checked in the set box.

In terms of gifts, they will feature only two mini-dolls (Mia and Emma nicely dressed with winter suits) and a lot of stuff not only to enjoy and play with but most of all to make a great living room just like in the set box, in a total of other twenty two elements.

The gifts besides the two END_OF_DOCUMENT_TOKEN_TO_BE_REPLACED

Almost five months to Christmas and here we have the next City Advent Calendar with the traditional twenty four gifts. I always love to have a close look to these kind of sets, there are always some interesting parts to enjoy and most of the times there are a couple of mini-figures that are very difficult to find in other sets.

The new City advent calendar has exactly two hundred and ninety pieces and features a lot of nice and small elements: a Christmas tree with a couple of gifts, two bakery stands with a small oven, a street lamp, a snowman, a snow bike, Santa’s Sleigh, a trough for the animals and a music set that includes a speaker, a microphone and a guitar.

And now, probably the main part, the mini-figures! END_OF_DOCUMENT_TOKEN_TO_BE_REPLACED

The new City Advent Calendar has just hit stores. The two hundred and seventy eight pieces include the usual twenty four gifts and a lot of great stuff to enjoy. The mini-figures weren’t forgotten, there will be six (a jungle police officer, a robber, three kids and the usual Santa) and some of the other gifts are also pretty interesting.

There is no doubt that most of the parts are small copies of city sets of several themes. Through the images it is possible to identify the complete list that consists on a small stand, an ice lake, a couple of remote controlled cars, an airplane, a excavator, a street lamp, a chair, a Christmas tree, a clock, a couple of gifts, a red train, a snowman, a police snowmobile, an husky puppy, a small fire and finally two replicas of the space shuttle and space port.

As usual in this END_OF_DOCUMENT_TOKEN_TO_BE_REPLACED