With three star wars machines, where the big All Terrain Tactical Enforcer takes the headlines, this new super pack brings also fourteen (!!) mini-figures but unfortunately some of them are similar or even the same. 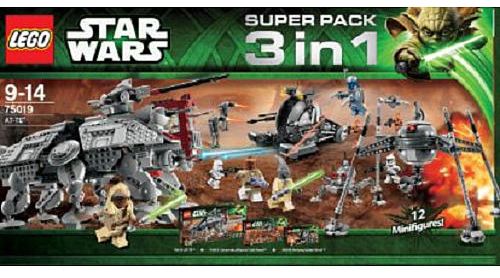 In terms of price, the set retails around the hundred and forty dollars which doesn’t seem much profitable because, separately, the three sets cost around the same. For now it’s already available in Toys r us but will it be exclusive or will we see it in other stores?

With this LEGO Star Wars Combination pack you can build the great Battle of Geonosis where the Separatist forces are advancing on the Jedi Knights and their clone army with the LEGO Star Wars Corporate Alliance Tank Droid! Help the Clone Troopers to repel the Droid’s crushing track tire and 2 flick missiles! Then fend off the Battle Droid and infamous bounty hunter Jango Fett. Includes 3 minifigures with weapons: Clone Trooper, Jango Fett and a Battle Droid.