Homer Simpson and Net Flanders have been surfing in the internet for the first time and currently are on sale on French ebay. There is still some doubts in the air if these are the real version of some of the series 13 mini-figures, but if they’re I guess that I’m a bit disappointed.

The pictures’ definition isn’t the best, but is clearly enough to see them with sufficient detail. Homer, for instance, looks too simple with a yellow torso (there’s too much yellow in this guy) and Net Flanders, despite its printed torso, doesn’t look much interesting. 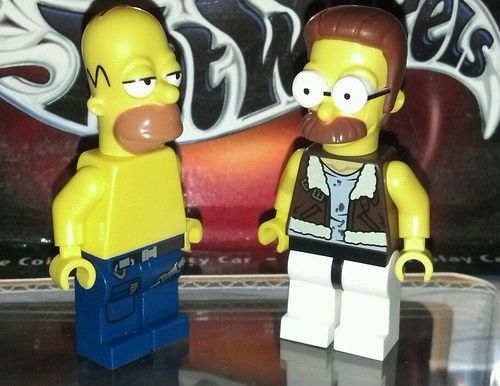 Their heads are also considerably big which is, definitely, a non consensual

detail among all the comments that I’ve seen. On the other hand, this way some of them will be pretty easy to find inside the 13th series bags. Have a look at Homer and Flanders:

One thought on “Lego Simpsons – The First Mini-Figures Images”