First of all, these seasonal winter sets have, perhaps, one of the most beautiful boxes in entire Lego. They combine winter, snow (and sometimes the Christmas), a little village environment and at the same time, plenty of color and movement, all in the same picture. This set has, besides the post office, a post van, typical of the first half of the last century, a bandstand and seven! Mini-figures: two post workers (that includes the driver), two musicians, and three citizens (I especially like the guy with the big hood).

The van is surely very beautiful. The only coincident part with the traditional vehicles is the naked chassis. Further that point, it is all different. The engine, at the front, is long and straight, and it has a rough grill. Even the bumper is a thin bar at the front, with the license plat placed at the corner. 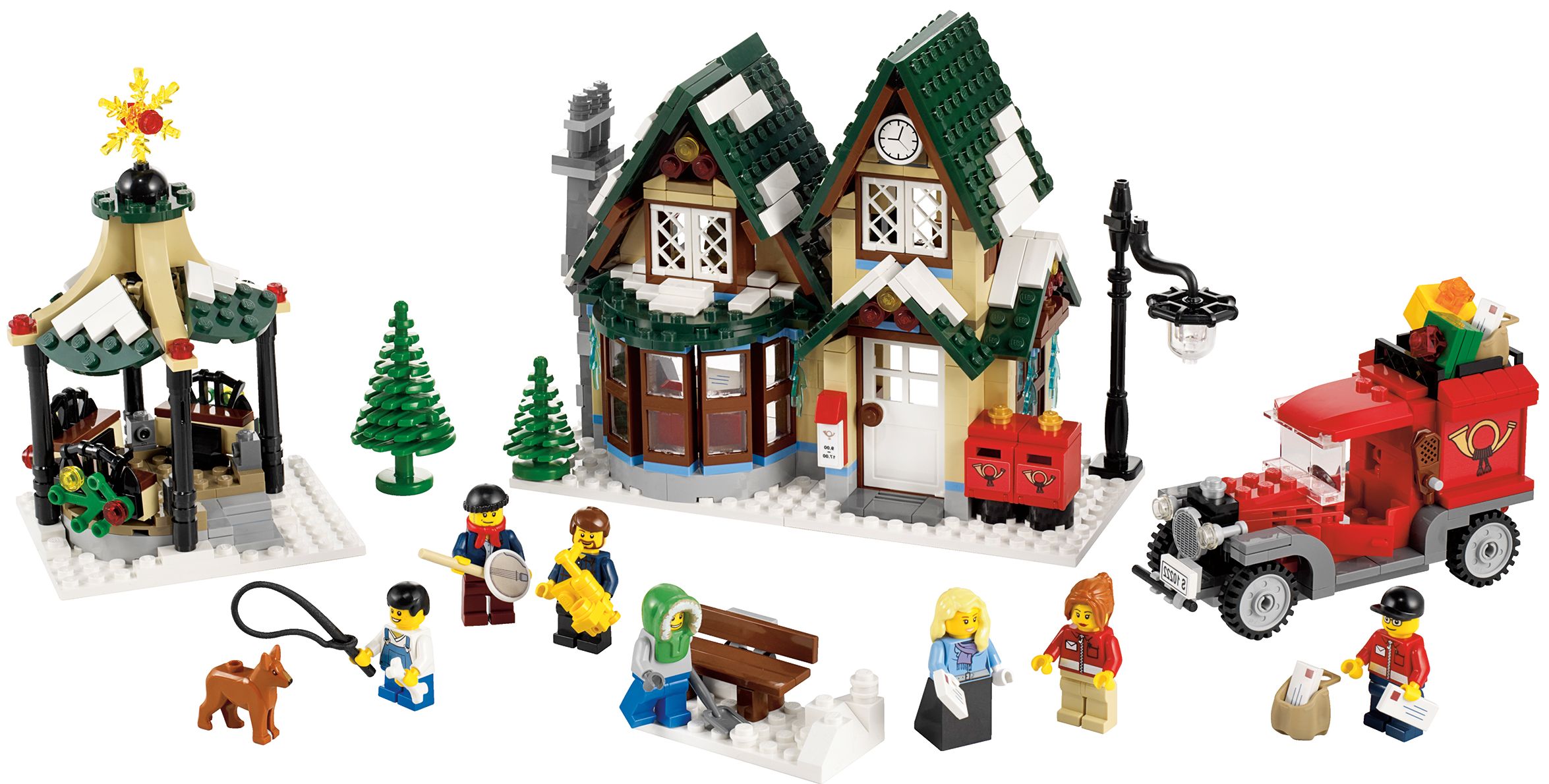 The cab uses the traditional side doors and the windshield is simply two straight classes that together with a strategic small yellow piece hold the roof. The wheel arches, this time, are not single pieces but instead a group that is attached to the chassis. Behind there is a nice trunk with plenty of space for the boxes and even, above in the roof, there is an extra space for more orders.

The bandstand is very rare and at the same time very pretty. In terms of building is a bit repetitive but surely worth it because the final result is very good. There is not a cherry in the top of the cake but certainly there is a beautiful yellow star at the top of the bandstand. The two guys will surely have a nice space to play guitar and saxophone. Near by, it can be placed a nice park bench that is placed over a white plate. Definitely is a good complement. 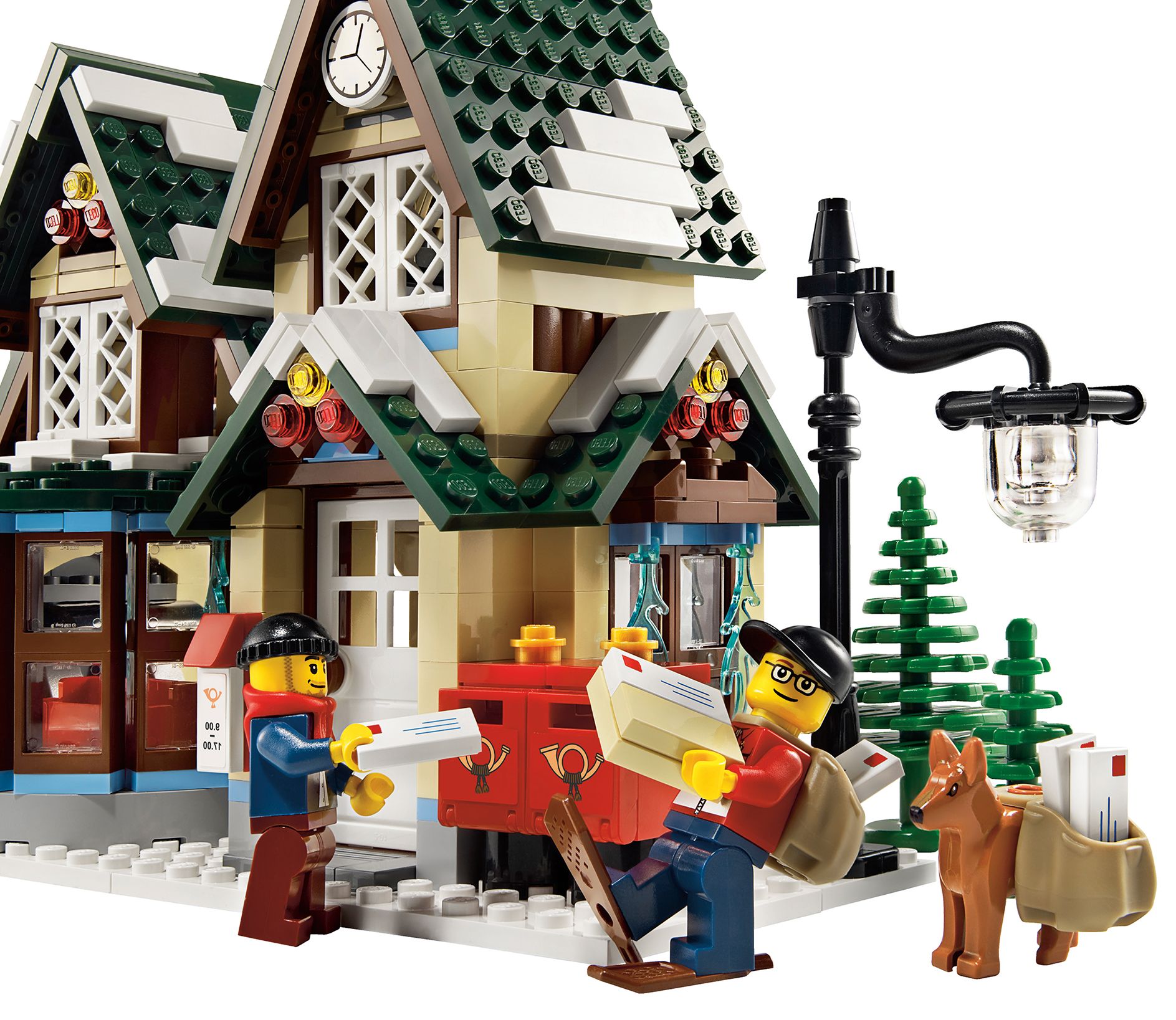 Now, the core item of the set, the post office. It is not very big but has a bunch of nice details and features. It is constituted by two distinct parts not only in terms of design but also according to the features. There is a nice entrance for the users that even has carpet, at the entrance.

Inside, in the ground floor, there is a red box for the letters and a reception office with plenty of space to work. If you look at the floor, you will notice that is the same for the two areas with a nice color’s combination and the windows are all very small and together make a nice round and big window. Besides that, there are letters and packages everywhere. 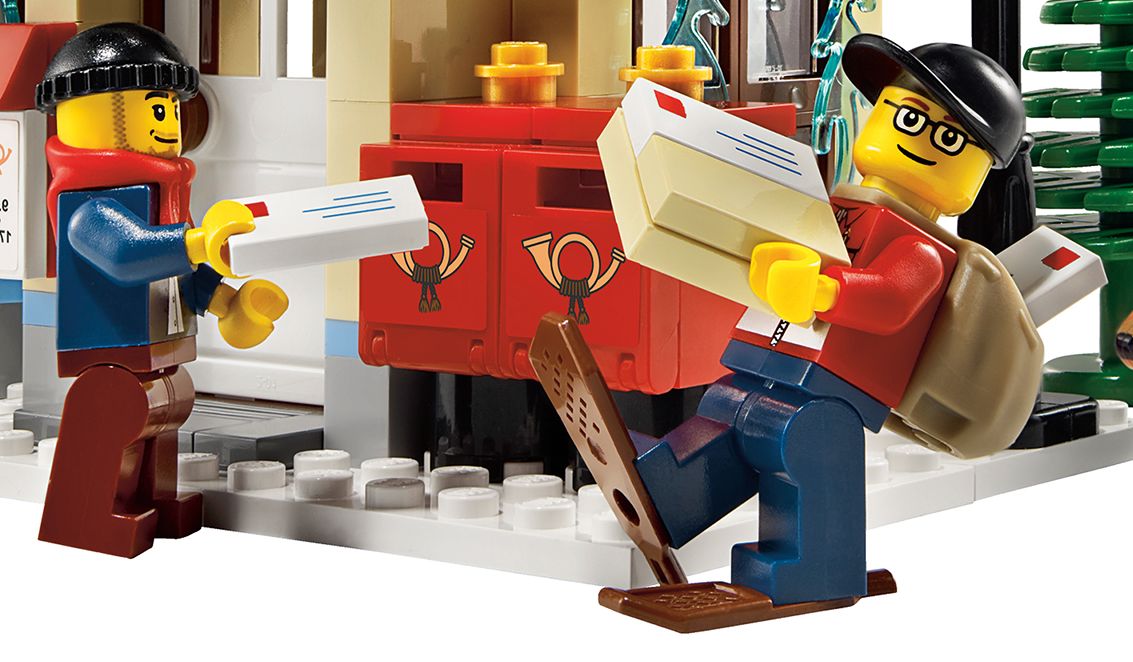 The first floor is constituted by a small penthouse and on the other side a small room with a table for the workers (there is also the good old coffee cup). The entire wall, in this floor, has some technic pieces in order to receive the several parts of the green roof. And this is a must because it combines the dark green with plenty of white pieces that simulate the snow. Even the porches have the some design.

Outside, the details make this set outstanding. There are mail boxes, plenty of lights, a nice clock, trees (there could be some white ones), an unusual black street lamp, and even a dog with a bone. Finally, the seven mini-figures do rest, transmitting all the fun and movement to the town. 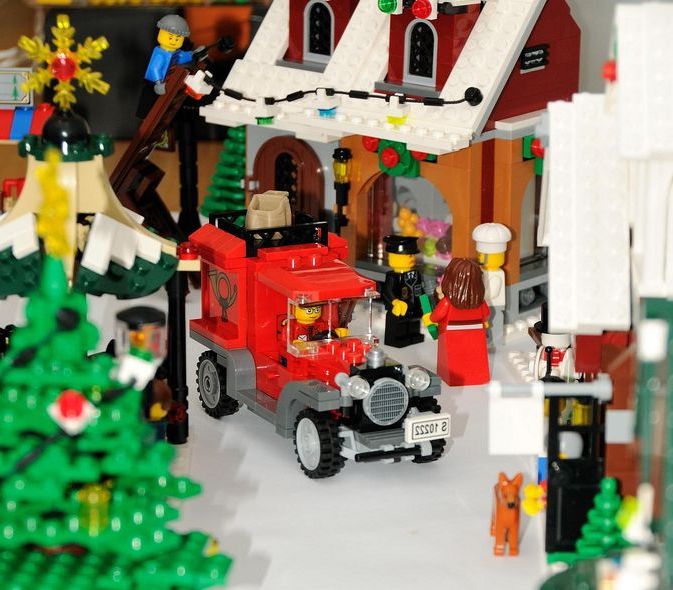 Now, comes the bad things (it could be worst)…the price. Seventy dollars for eight hundred and twenty two pieces look like a fair price. Please, take a look at the gallery below. Some photos are really quite good and you desire, the instructions can be downloaded right from here: