Pictures of the new Ninjago set, Samurai X Cave Chaos (70596), have been published on Amazon Japan, showing an awesome set with plenty of action and details to enjoy. With exactly one thousand and two hundred and fifty three pieces it is until the moment the biggest Ninjago set of the next wave of releases.

The set should be available next summer with a retail price around the hundred and twenty dollars. Have a look at the images and enjoy! 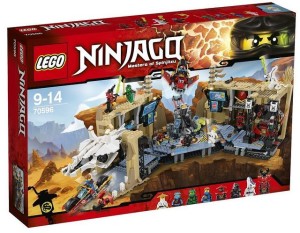