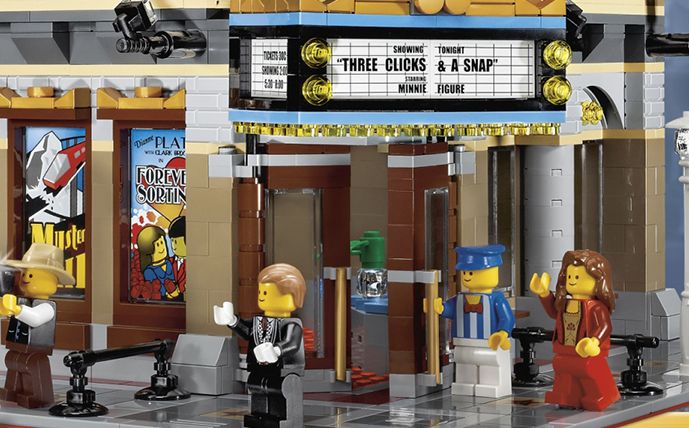 However, allow me to highlight some details on this huge set that are simply outstanding and that until now, were not so clear:

This is definitely a must, and according to its size, fortunately  won’t be inaccessible in terms of price. Have a look at the press release:

Build a grand premiere at the Palace Cinema!

It’s premiere night at the Palace Cinema! Illuminate the night sky with the spotlights as the child star arrives in a fancy black limousine! Gather the crowd on the star-studded sidewalk, then head into the detailed lobby with a concession stand and ticket area! Take the grand staircase into the theater with a large screen, movie projector and reclining chairs for 6 minifigures. Introducing the latest addition to the LEGO® Modular Buildings series, the highly detailed, 2-story Palace Cinema corner building. This collectible model features a sidewalk of the stars, brick-built entrance doors, posters, sign frontage, a tower with spires and rooftop decorations.

• Seat a 6-minifigure audience in the reclining seats!

• Play on the star-studded sidewalk, in the detailed lobby or in the big-screen theater!

Please have a look at some additional pictures below: