In partnership with Cartoon Network, Lego will launch, next Spring, a new theme, the Lego Mixels. This new line will include small priced sets along three waves that will show several little creatures with different types if shapes and color schemes. A multi-platform mobile game will also be presented during the launch of the set line.

Personally I think that I won’t take much time with these little guys.  They’re not properly beautiful, neither compatible with other themes and at the first glance, I ‘ll definitely pay more attention to the TV series and the video game than these ugly fellows. 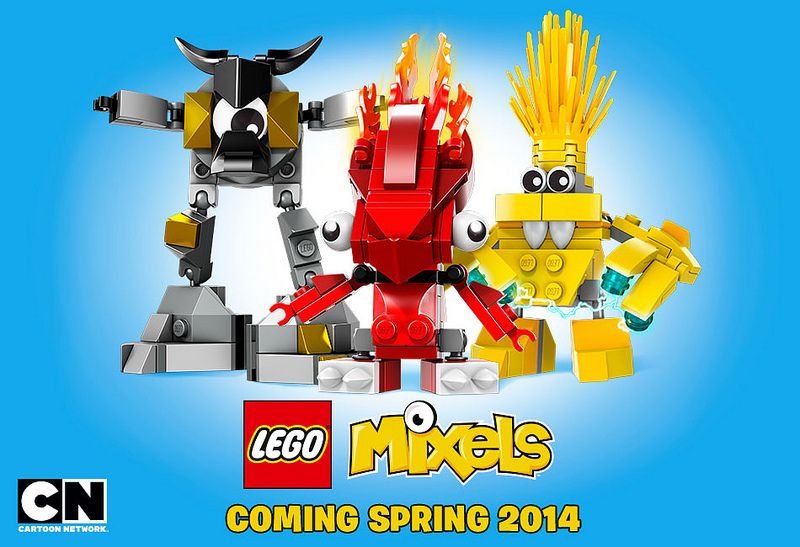 If you like theme, have a look at the press release:

ATLANTA, July 22, 2013 /PRNewswire/ — Cartoon Network and The LEGO Group announced today that they will jointly produce an unprecedented new global entertainment franchise. Launching in 2014, Mixels is the next franchise in integrated family entertainment from two of the world’s leading experts in youth engagement. The new venture will feature animated content (primarily shorts), a rich digital gaming experience, a collectible building toy concept and more.

Animated content will air on Cartoon Network and on www.cartoonnetwork.com, featuring the colorful Mixels creatures that can mix and combine with one another in creative and unpredictable storylines. A collectible portfolio of low-priced mini building sets will launch in three waves in 2014 and an app-powered gaming experience will engage fans in a deep mobile game that will cover the sprawling world of Mixels.

Mixels was developed through a true collaboration between Cartoon Network, a leading global kids entertainment company, and The LEGO Group, globally renowned for its heritage of quality, creative play experiences. The two companies joined forces when Cartoon Network Studios had an interest in creating original content based on the inherent open-ended values of LEGO® play, at the same time that The LEGO Group was exploring a new concept involving small creatures – and Mixels was born. The property was developed by a multinational team of content innovators, designers and animators – from Los Angeles to Atlanta to San Diego to Connecticut to Denmark.

“This is the next step in the evolution of Cartoon Network Studios and the way we develop original IP,” said Rob Sorcher, chief content officer, Cartoon Network. “Bringing together world-class animators and game developers with LEGO content and product design teams at the earliest stages of creation proved to be an energizing collaboration, showcasing the creative strengths of both brands.”

“Our relationship with Cartoon Network has really evolved and they have been really great, supportive partners who share our passion for children,” said Jill Wilfert, vice president licensing and entertainment for The LEGO Group. “After working closely with them for the last few years, it is obvious that they truly understand and fully embrace our brand and our core values, so we are thrilled to embark on this new journey to develop and deliver a highly creative and fully integrated new experience with them.”

“Families today are engaged in many ways and want a seamless entertainment experience,” said Stuart Snyder, president and chief operating officer for Turner’s Animation, Young Adults & Kids Media Division. “The reach of all the Cartoon Network platforms combined with the different touch points of the beloved LEGO brand will enable us to create a fully integrated and rich experience from the very beginning.”

Mixels will inspire new ways for young people to engage in immersive entertainment content that fuels sustainable, creative physical and virtual play. Fans and the audience will become creators and active participants in the process, creating new characters and content. This is a multi-format, multi-platform experience where a kid can join in anytime, anywhere.

With this exciting new franchise, Cartoon Network Studios will drive all narrative, animation and digital content and Cartoon Network Enterprises will handle Mixels non-toy licensed merchandise. The LEGO Group will focus on Mixels toy design, manufacture and distribution as well as licensed LEGO Mixels publishing to support the property.

The LEGO Group is a privately held, family-owned company, based in Billund, Denmark. It was founded in 1932 and today the group is one of the world’s leading manufacturers of play materials for children. The LEGO Group is committed to the development of children’s creative and imaginative abilities. LEGO products can be purchased in more than 130 countries. For more information, visit www.LEGO.com.