The new Lego Ideas Doctor Who (21034) was finally revealed by Lego. In the past days, a couple of teasing images surfed in the internet suggesting that the final result was pretty closed of being presented to the fans.

The general look was already known but there were a bunch of details that could be only seen with the official pictures and looking at the first reactions of the fans, their impressions couldn’t be better.

The set is considerably big and features besides the iconic Tradis, four mini-figures ( the 11th and 12th doctors, Clara Osvald and a Weeping Angel) with plenty of nice accessories and two additional figures (a couple of Daleks) in a total of six hundred and twenty three pieces which is definitely big for a Ideas set.

The central control room is absolutely my favorite part with lots of blue transparent pieces and a bunch of panels and controls but the blue police box is also very nice even with the several stickers everywhere (through the pictures it is possible to see a small attaching mechanism that allows to put it together withTradis). The set should be available next December and should retail around the sixty dollars. 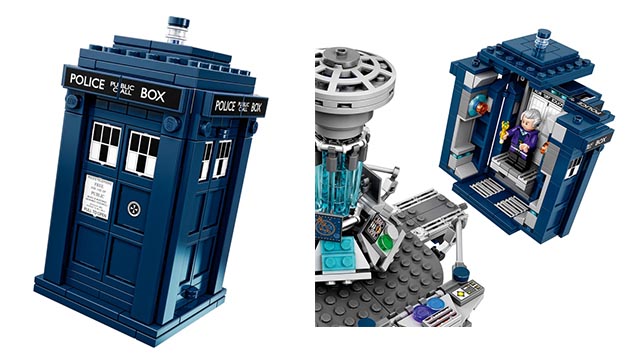 Take a look at the official description:

Construct a stunningly detailed LEGO® version of the iconic TARDIS® and role-play the Doctor’s time-travel adventures! Created by fan-designer Andrew Clark and selected by LEGO Ideas members, this set is based on the BBC’s popular and long-running television series about a Time Lord – the Doctor – exploring the universe in a blue police box. Due to trans-dimensional engineering, the TARDIS is bigger on the inside than the outside and this cool multifunctional set includes the console room that houses all the flight controls. Regenerate the Doctor and defeat the evil Daleks™ and a Weeping Angel with the help of his extraordinary companion Clara. Then close the doors of the TARDIS and launch into another dimension! Includes 4 minifigures with assorted accessory elements: the Eleventh Doctor, the Twelfth Doctor, Clara Oswald and a Weeping Angel, plus 2 Daleks™.