This is definitely one of the coolest sets of the last years. It will surely integrate, with perfection, any kind of town. Not only the vehicles are quite well designed but mostly, with the exception of the sport car, they are a bit unusual. Besides the four vehicles (a sport car, a street sweeper, a bus and a tram), the set has also four mini-figures, three station platforms and some accessories.,

The little yellow sport car is very cute, is similar to the red 8402. It is easy and fast to build, the chassis and most of the pieces are practically the same and the two big differences for me are the little old side doors, which I like in most of the city vehicles, and the black safety protection piece of the passenger. 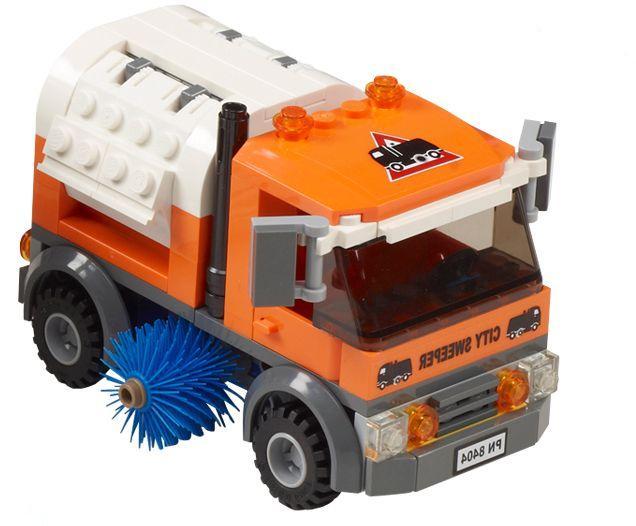 The Sweeper is also small (only 12 dots plus the two bumpers), but the cab and the rear parts are built separately. The cabin has plenty of space, this one doesn’t have the omnipresent coffee cup, but should have a seat for the worker because it  has space for that. The rear deposit has two side doors that open through a couple of technical pieces, when is necessary to “clean” it. The sweep mechanism is built below, in the chassis, with some other technical pieces and works properly.

Now one of my favorite attractions, the bus. It has an attractive design, plenty of glass all around and has 6 passengers’ seats. It is built in two parts, first the chassis and after, the comfort structure. The chassis is easy to build, but it has some fine details such as the lowered position of the driver and the trunks below the passengers area. 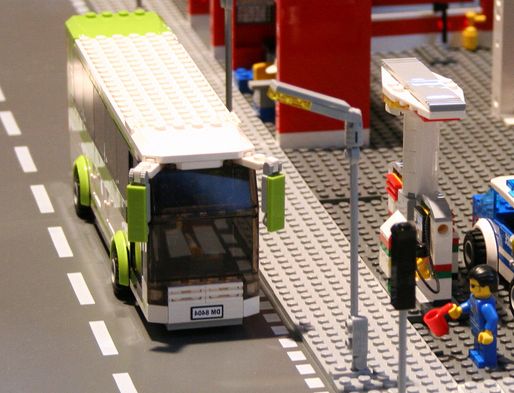 Once this part is built, ten big glass windows will fill all the entire structure. The driver has a big side door similar, to reality, but the passenger’s entry deserved another kind of door. I know that it might be difficult, but there is not such kind of access in reality, it looks more to a house entrance. But gladly it is just a minor aspect. Another smaller note is the fact that behind the last seat, there is some empty room. A small kitchen or a washroom could be placed in that area. Finally, the roof can be easily removed in order to increase the playability and give a better access to the interior, every time you need to seat the passengers. 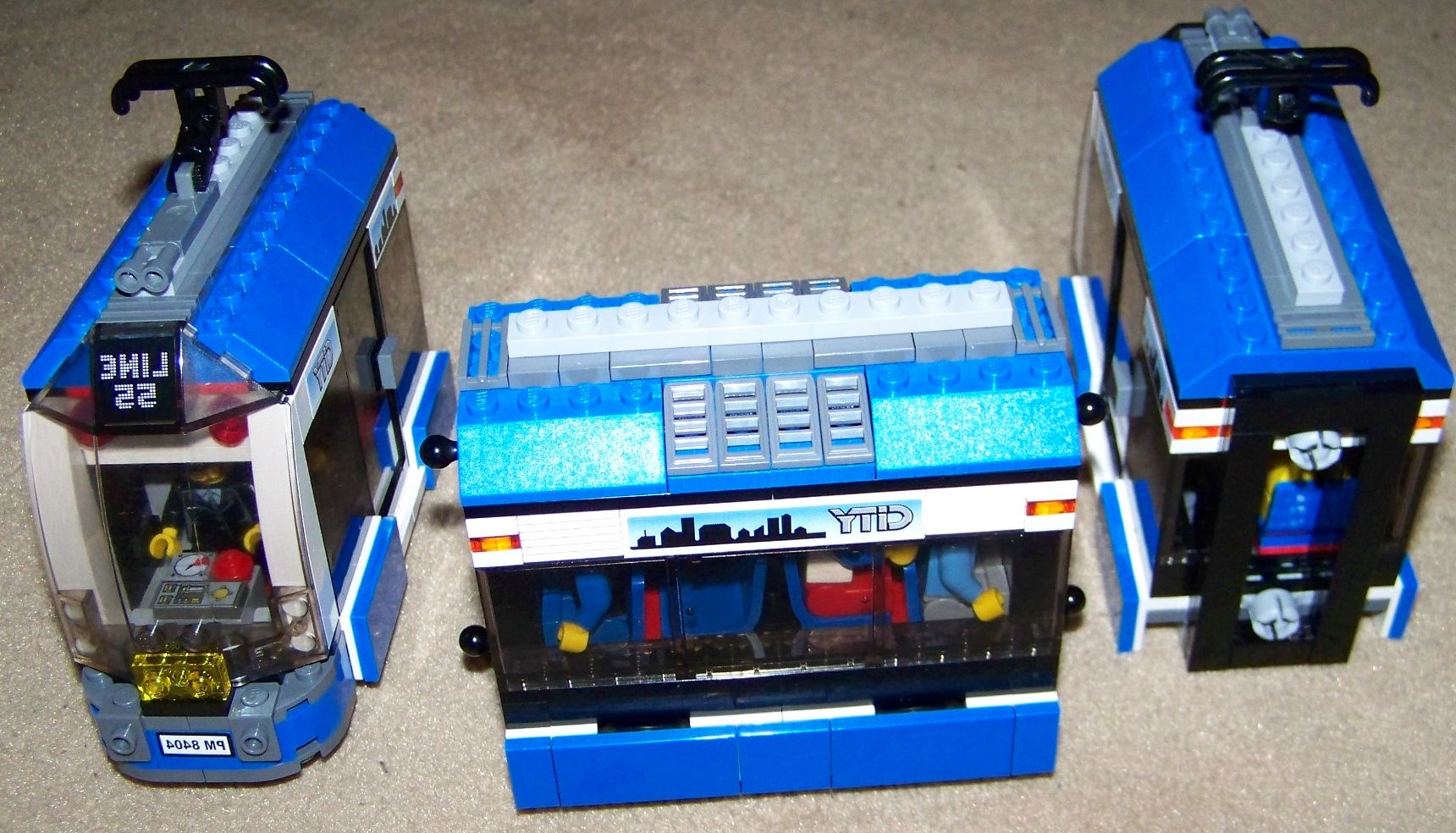 The Tram is another reason why I love this set. Just as the bus, it is very close to reality, and it is compatible with the traditional Lego railway. I will surely investigate if there is a way to put an engine on it. Besides that, the edge’s carriages are symmetric, with three seats each and plenty of glass all around.

The middle carriage has the same design but is smaller and only has two seats. I wonder in this case where is that passengers enters. It deserved a small door too. Besides that, the tram has plenty of nice details (the windshields, the electric power arms, the little wheels…) which makes this vehicle one of my favorites. 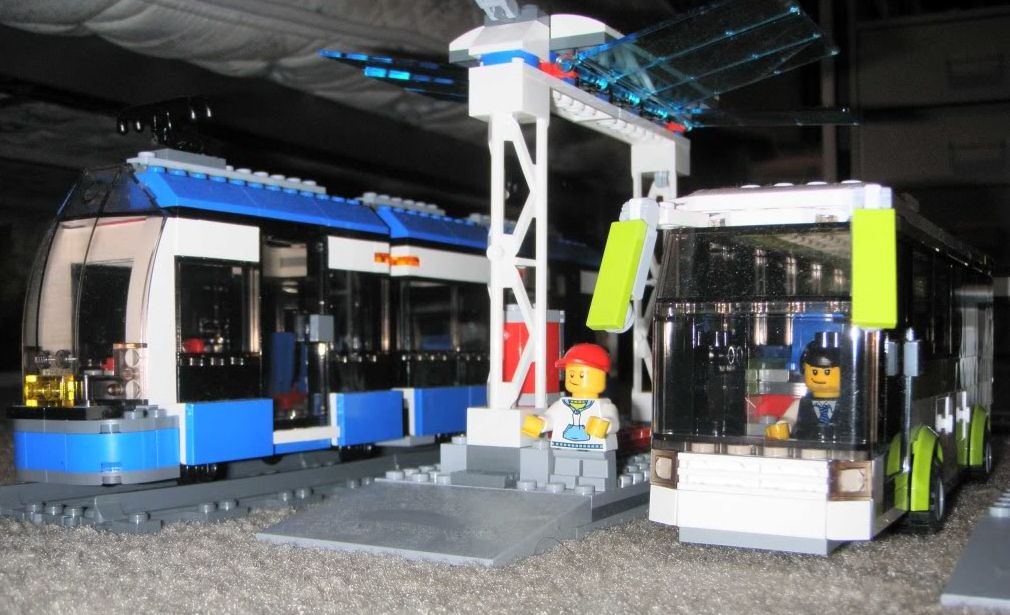 Finally, the station platforms. They are three and different from each others. One of them has a little shop with a coffee machine and some postcards. The bigger one has a modern look with a roof made of glass and a ticker machine. The smaller one is a typical city bus station with a schedule map and a bike’s parking place in the edge.

Almost eight hundred pieces, four city unusual vehicles and six mini-figures surely worth the 100 dollars. It is definitely an unmissable set. If necessary, the instructions can be found right here: