I love this set. Although it has been releases in 2007 it still has no substitute. The service station is huge in terms of features and beauty. Besides the station, the set has also a city vehicle ready to be washed, a motorbike and three mini-figures, a station worker and two drivers for the vehicles.

This station is a must for every town and it has something different from the other because you don’t put it next to road plates, you will put in the middle of them, because the base is a road plate, which is quite unusual but very nice indeed. I would say that the most part of the city vehicles will pass below it without problems. 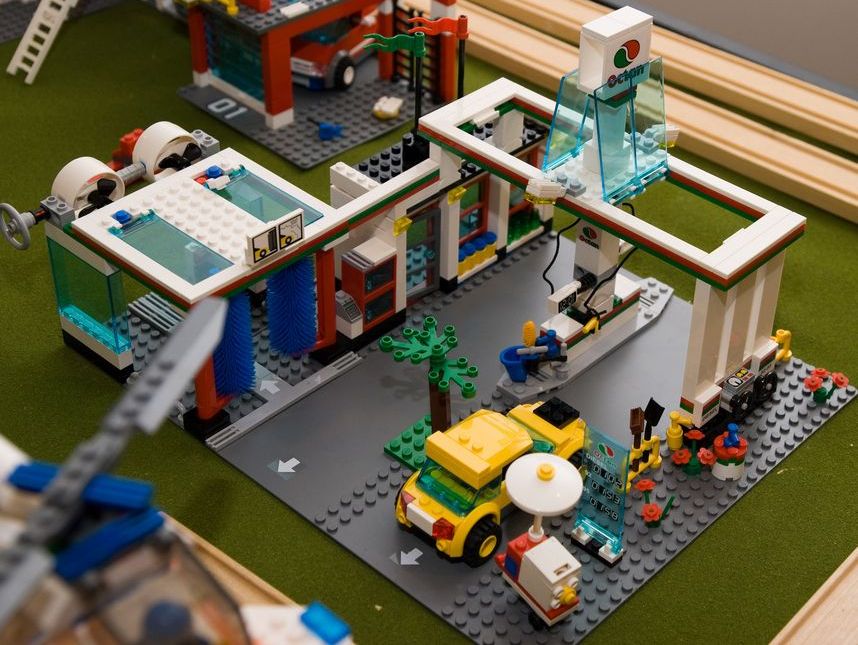 There are basically three distinct areas: the pump, the shop and the car wash. The shop is nice, out side has plenty of oil can (or whatever), but inside beside the reception desk it has absolutely nothing. There should be at least a small coffee machine because space is not shortage on that area. Next to it there is also a nice refrigerator machine with a couple of juices. 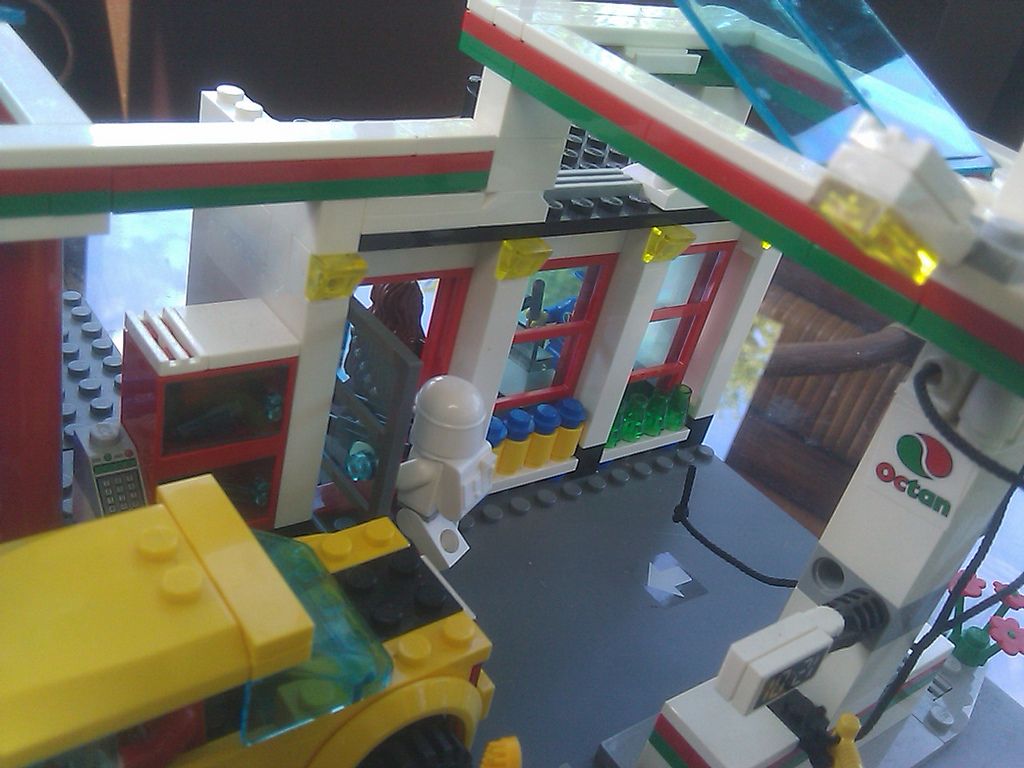 The wash area hasn’t forgotten any detail, not even the little light signs. The rubber brushes (which are connected through a little elastic cord in order to be pushed onto the car), the big dryers on the roof (by the way, the roof has some glass skylights that can open anytime you want. A final note, the car wash has only one way, if you try to pass through with a car in the wrong way, the brush mechanism will dismantle. 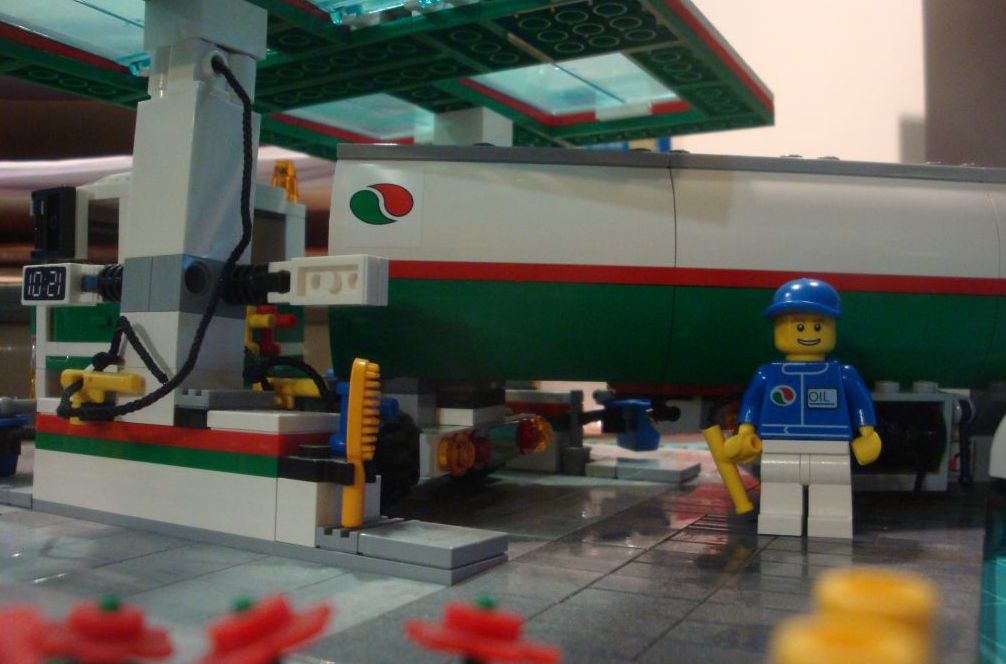 Finally there is the pump, which is a covered area that in terms of playability is very interesting. There are two pumps with the respective hoses, in the middle, one in each way and next to them a couple of cleaning accessories such as a bucket and a brush. The pump supply has not been forgotten because on the other side of the road there are two leverages that will open the deposits every time the tank truck arrives to load them.

The roof is interesting and unusual because it is all made of glass (the skylights are can also open) and in the middle there is an Octain Outdoor symbol. In terms of accessories the service station has plenty: lamps, flowers, an extinguisher, a shovel and a brush, and even a small tap near the pumps. Of course the board with the fuel prices is also present in one of the edges (or wherever you want to put it…). 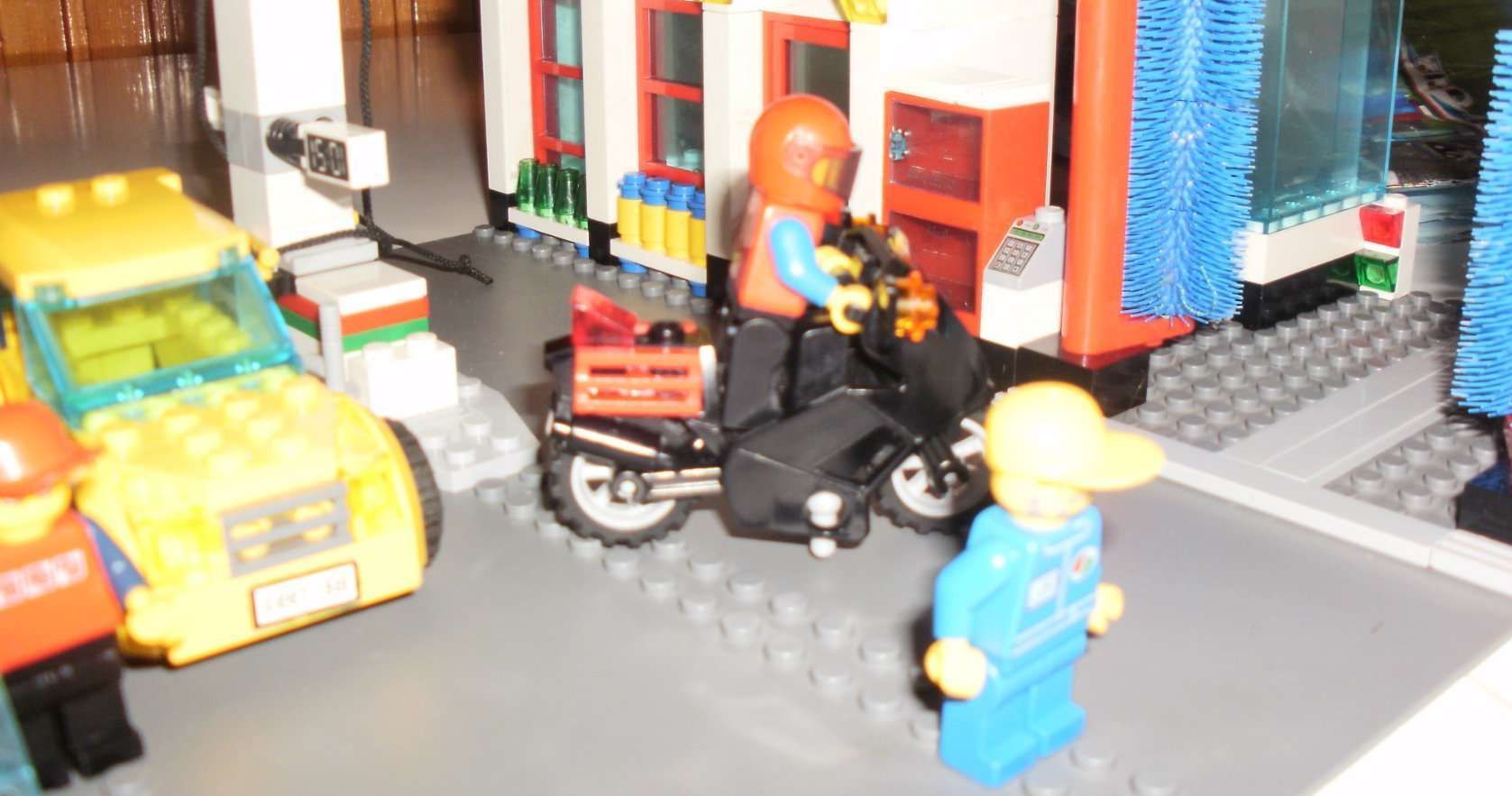 The vehicles are basically two clones of the police vehicles, only with different colors. But the final result remains very good. The black motorbike with red stickers has a nice combination and the car would be almost perfect if it has two things: the little old side doors and a decent seat for the driver.

But these are just a few details that don’t destroy the set’s value. For me it is one of the best in city theme and surely worth every centime. With about four hundred pieces it is unfortunately a rarity even in the net. If you need, the instructions can be found right in here: