The Cargo Train is my last acquisition and at the same time my first train in town. And I must say that a city is not the same without a train. Not only is a different kind of vehicle but it also brings the city all the sensation of movement. And the speed is quite a lot as I will explain forward.

The set has almost nine hundred pieces (many of them unique) and four mini-figures divided by: the big yellow locomotive, three wagons (a fuel tank, a container carriage and a car transport), the green crane, a red truck with an extra container, and of course plenty of rail tracks. All these vehicles combined, perform one of the most playable sets of city theme and perhaps of all entire Lego. 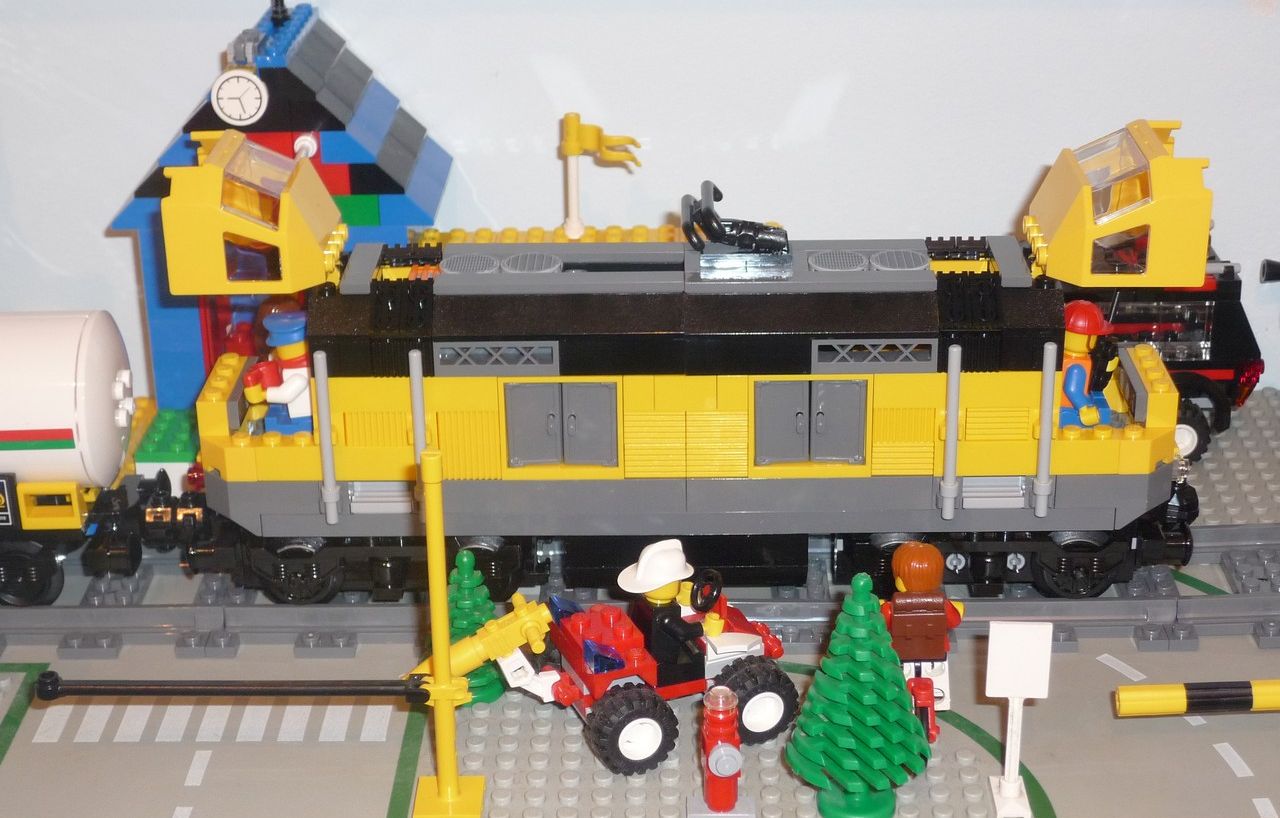 Starting by the core, the locomotive, it is bigger and heavier than I thought. Of course that there is a ton of pictures and movies in the internet, but when you hold it, the sensation is completely different, for better. Looking at its construction, the base is a flat and long plate, where everything, including the wheels, will attach.

Not only in the outside but also inside, until certain point, its construction is symmetric and the cabs, one on each edge, are also similar. Below, the wheel axes are very easy and intuitive to build, including the electric part. The yellow pieces start rising parallel and when you arrive to the cab’s pieces you start thinking: “uau, it looks like something now!”. 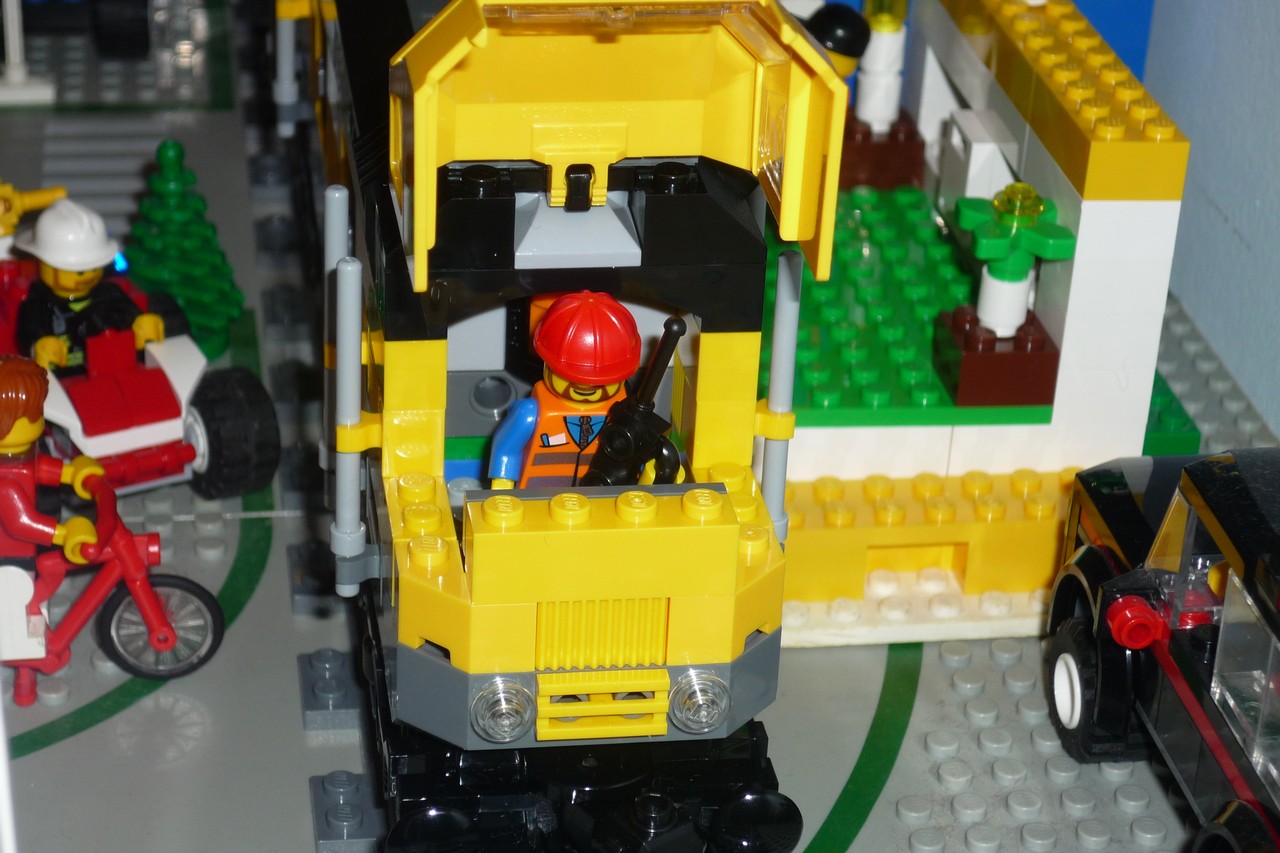 Talking about the cabs, they are easily accessible because they have a tipper function made with a simple junction of a clip to the cab’s big piece. Inside, in the middle, remains a big empty space that will receive the batteries’ box, the infrared connection and all the supporting cables. There is room for everything and for more. I say “for more” because the electric connections as well as the IR control allow an extra connection that I intend to use by putting some lights in the train. It will surely give it a better look. Once the electric parts ate mounted, the roof will gradually appear as well as an interesting on/off button made only with Lego. Even the refrigerating fans were not forgotten. 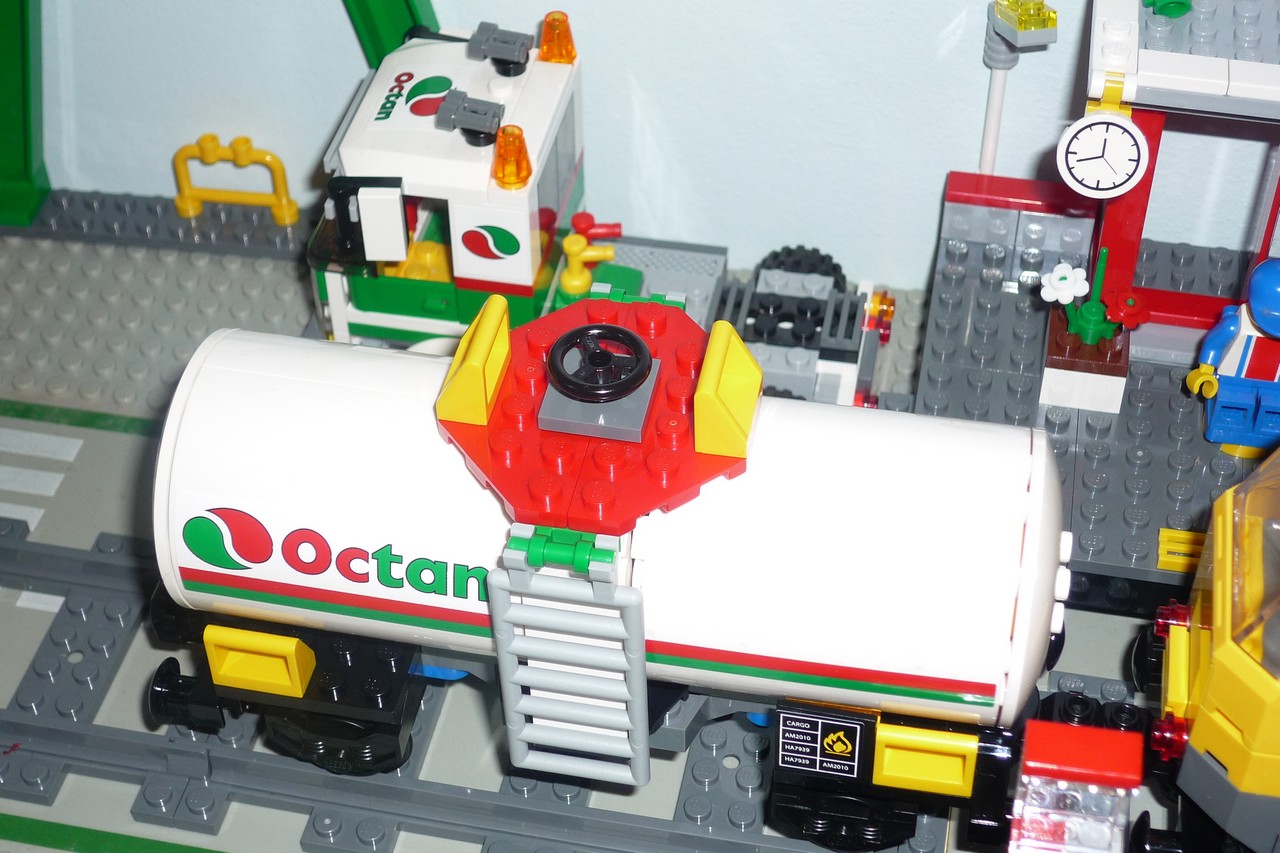 Once built, you will notice that this locomotive, being common in nowadays, has plenty of nice details. The side doors, the bars for the workers, the cabins’ access, the front and rear lights and even the perfection of the axes are some of the possible examples. And if you turn it off, with no wagons attached, you will not stop until the batteries are over. The seven possible speeds are really different, and at 6th or 7th, the stand alone locomotive will not hold and will fall on the curves. My guess is that the top speed will be around the 5 or 6 Kms/h.

Enough of the locomotive, lets pass to the wagons. They are all very simple to build. The fuel carriage has the base of a city car. The tank uses the cylindrical pieces commonly used in other city sets, cleverly attached in the middle and in the top. It has some nice details such as the lever on the top or even the side ladders.

The car’s wagon is perhaps the simplest. Two wheel axes attached to the single plate base, a couple of stuck pieces for the smarts and some protection barriers and it’s done. The smarts are equal to the set 3177 that can be viewed right here. Finally in terms of wagons, there is the container wagon that is similar to the previous one, with the difference that the base is made with several small pieces.

Talking about the two containers, they are also similar with the difference that the red is bigger. Several straight pieces attached on the top by the roof with some small pieces below, in order to give the proper balance when they are in the wagons, are enough to build more playable features. 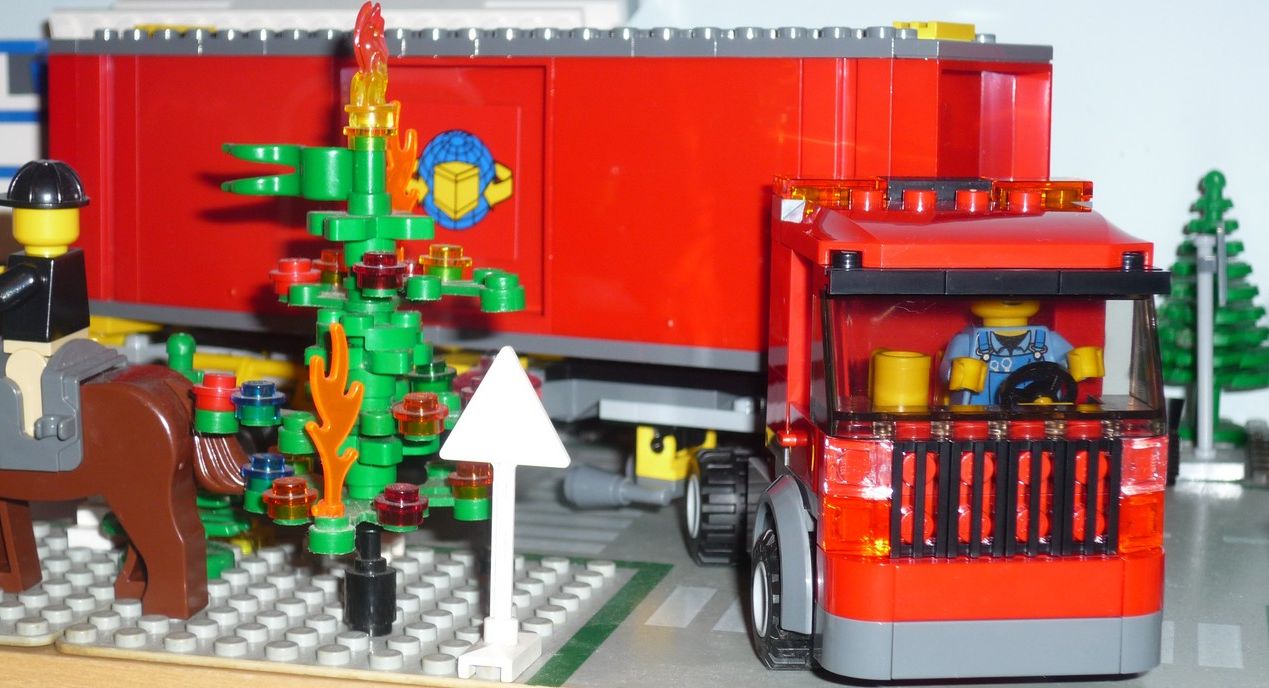 The truck is a common vehicle of the city theme, it has the same size and features, for instance of the 3180 fuel truck. The trailer is very thin and at the first glance looks a bit fragile but it competently transports both containers. Be careful with the license plate, because it easily falls from the trailer’s body.

Finally, there is the crain that is surely a simple and competent structure. It holds with no kind of problem, not only the little cars but also the big container. Further that, as you might guess, the crain is based in two big side pillars that support the cabin’s gutter. Not only the cabin slides perfectly but also it is cleverly stuck in the structure, thanks to a couple of pieces placed below the base. 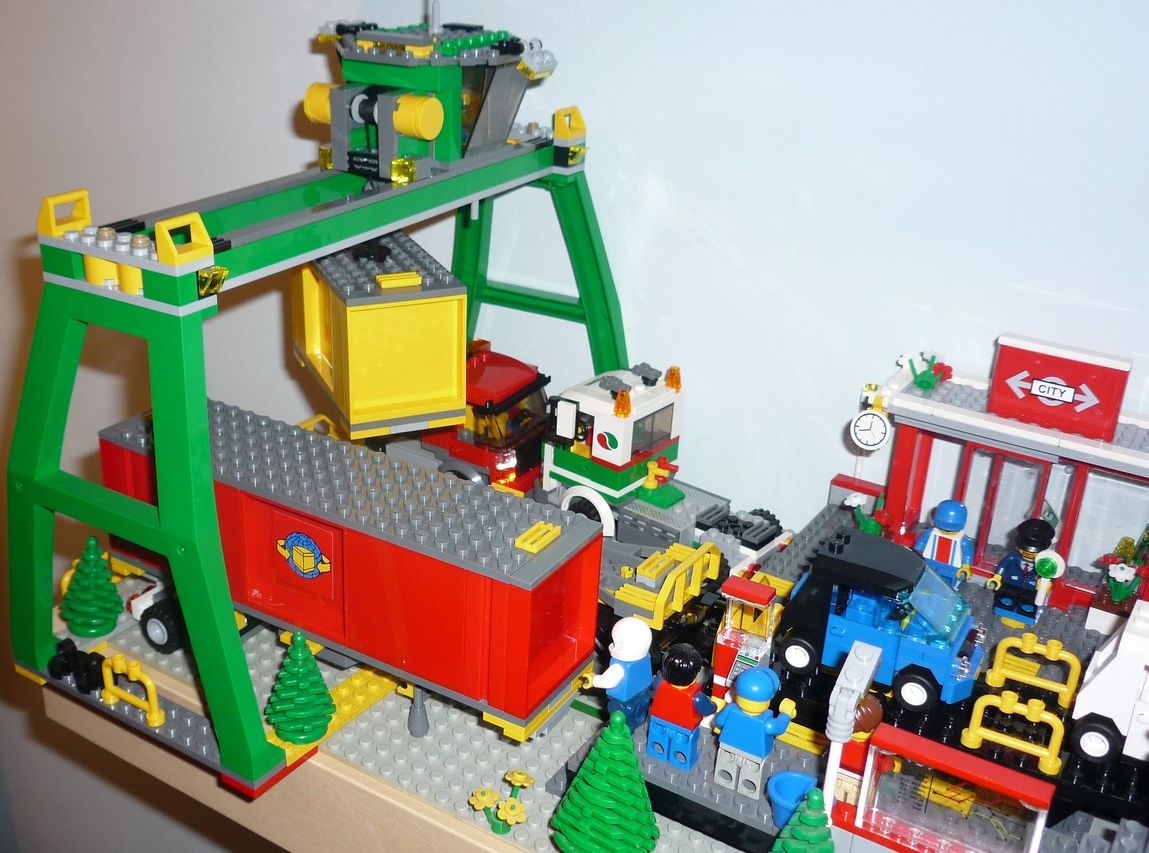 The cab is all made of glass and the roof has a tipper door for a better access. Just behind it, there is the winch mechanism made with technic pieces that easily go up and down thanks to a couple of side levers. As you see there is plenty to choose and the playability is awesome.

Now, the price. You must really love trains to spend almost hundred and fifty dollars. It is heavy but surely worth it. Please take a look at the photos, below, and if necessary the instructions can be downloaded right from here: