The Police Headquarters is one of the most interesting and exciting sets in the city theme. It is perhaps even better than the newest 7498, Police Station. At least it is surely bigger because it has almost one thousand pieces. Besides the huge building, the set has also two police vehicles, a motorbike, five police officers and two prisoners.

The first feature that stands, in my opinion, is the closed courtyard. It has plenty of space not only for extra police vehicles but it also gives a sensation of security and authority that this structure must have. But obviously my favorite part is the fact that there is available space  to park other vehicles. And the courtyard is not the only place because below the jails there is room for more. Personally in those places I usually part the motorbikes and the ATV. 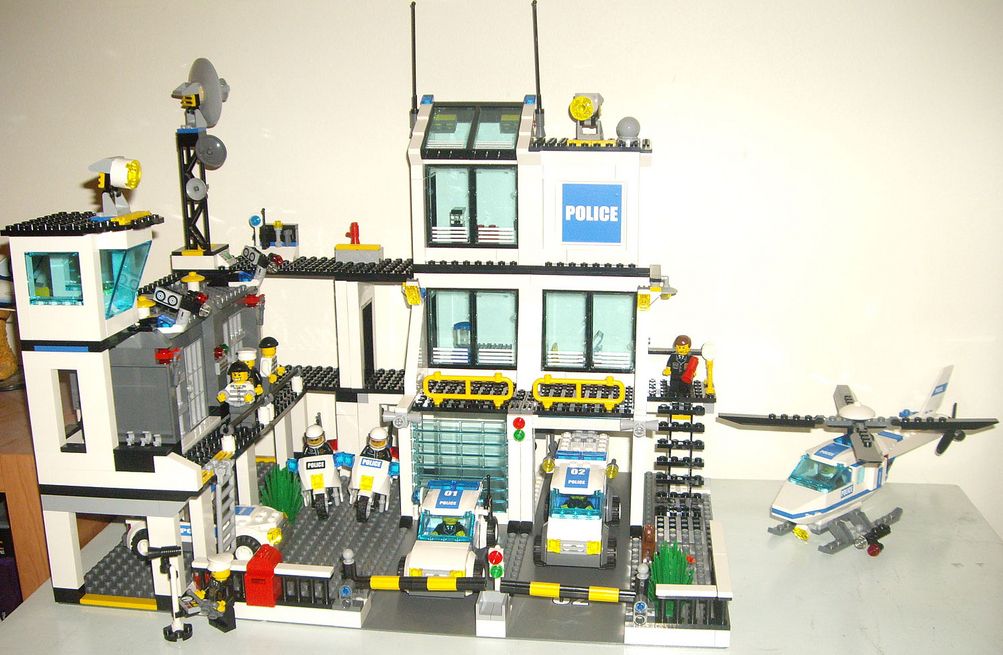 The building is quite wide (one and a half road plate size) and tall (three floors). Looking at the left, the ground floor is an empty space that can be used to park extra vehicles, as I said before. Above it, there are two separated jails with interesting features. Inside there are two beds and two toilets, and the best part in terms of playability is that the prisoners can escape from the jail, overthrowing the walls.This is done with a nice mechanism that is available in the outside. Above the prisons, there is a surveillance tower with a spotlight and plenty of nice accessories: Two cameras, a communication antenna with a control panel, a couple of binoculars and much more tools. 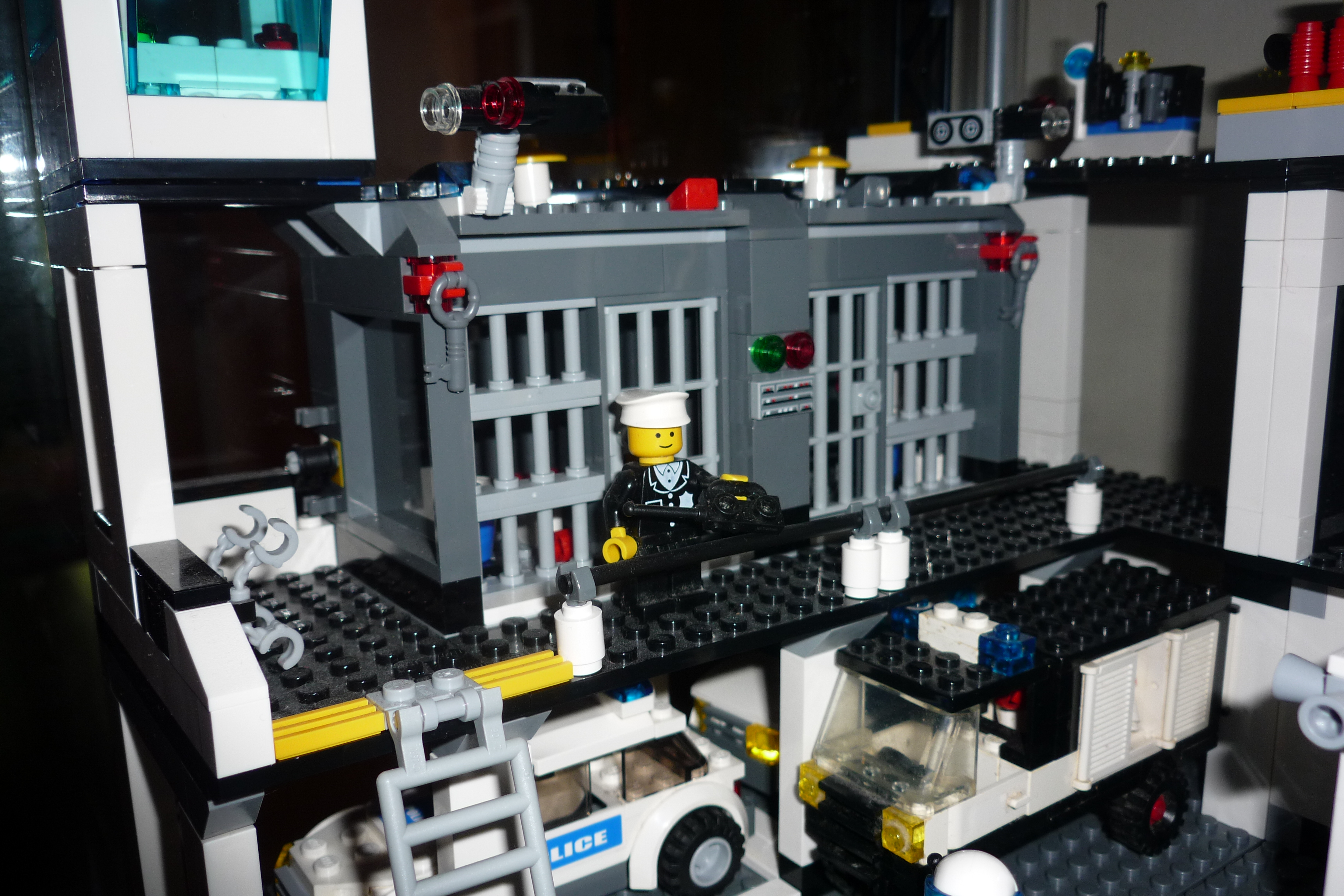 In the central building there are the two garages that have enough space not only for the set vehicles but also to other bigger vehicles such as 7245 Police transporter, for instance.The building almost has no walls but the columns give a nice resistance to the structure, better than the fire station 7945 for example. 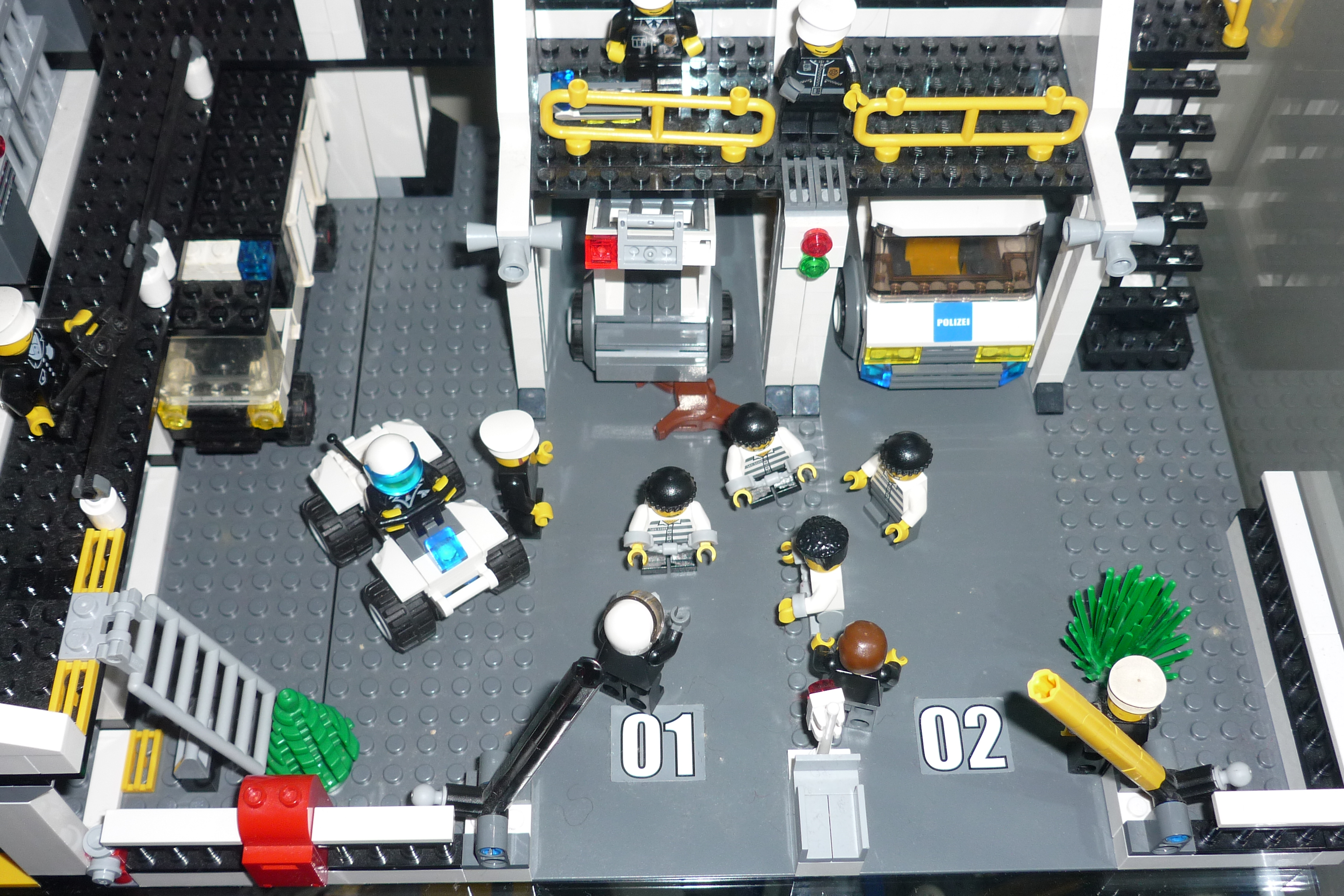 Above, in the first floor, there is a considerable office with a computer desk, a water machine and a small store compartment. This office has windows in its entire front. In my opinion, at least one could be slide. But it is not over yet, because above there is an interrogation room with a bunch of tools: a recorder, a spotlight and an interrogation table, a protection glass dividing the rooms and much more. In the roof there are two antennas and another powerful spotlight. 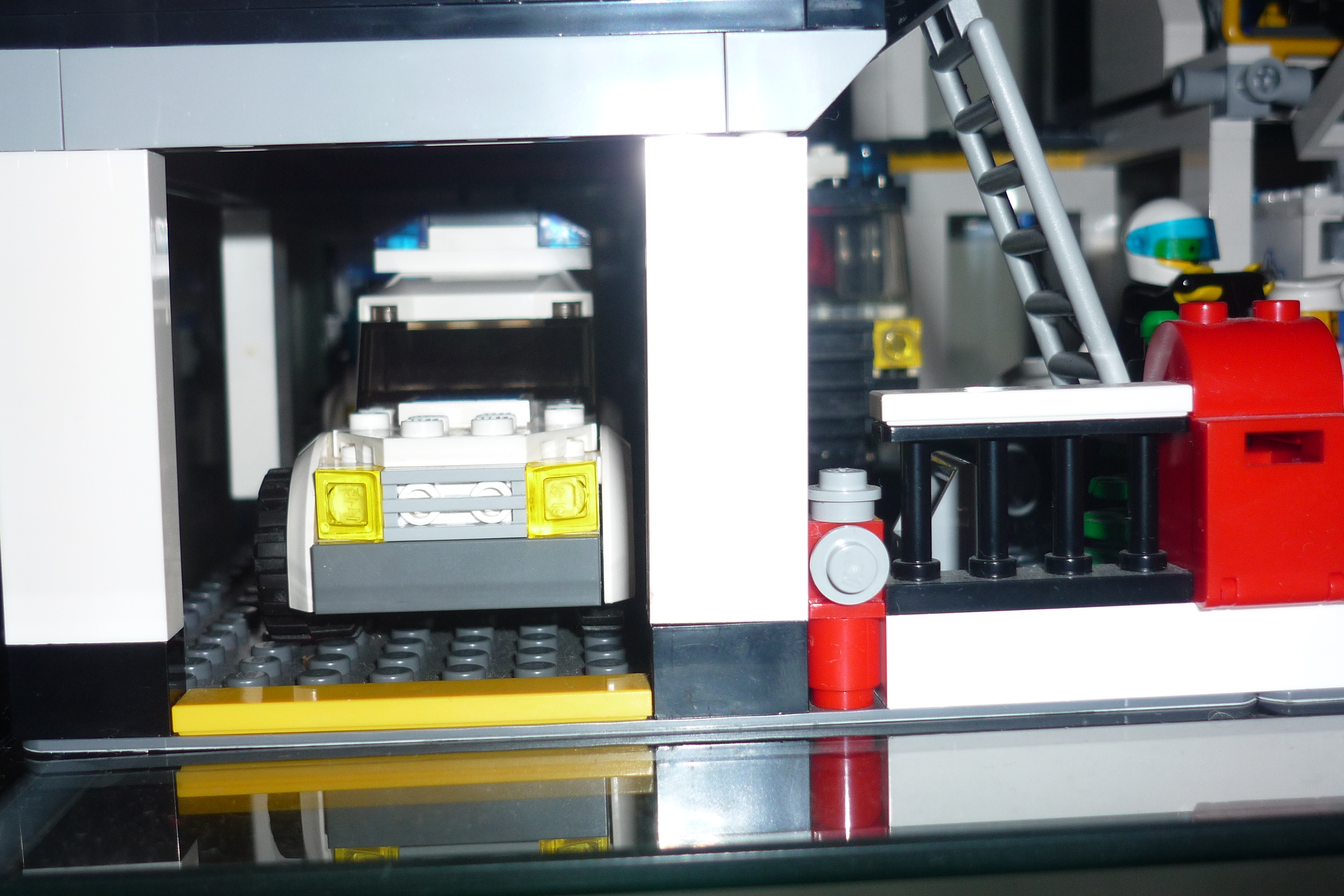 Outside the details are tremendous: Light signs in the garages and in the entry, the two gates, the speakers, the fences all around the courtyard, the bushes and trees, and even a red mailbox. Once the two blocks are built, they are attached not only with some technical pins but also in two additional places: in the fence, near the mailbox and in the roof, just in the place where the police have some megaphones. Finally, and talking about the all structure, there are two other possible combinations of these two blocks, in order to give the headquarters a different look, but this one, with the courtyard, is definitely my favorite. 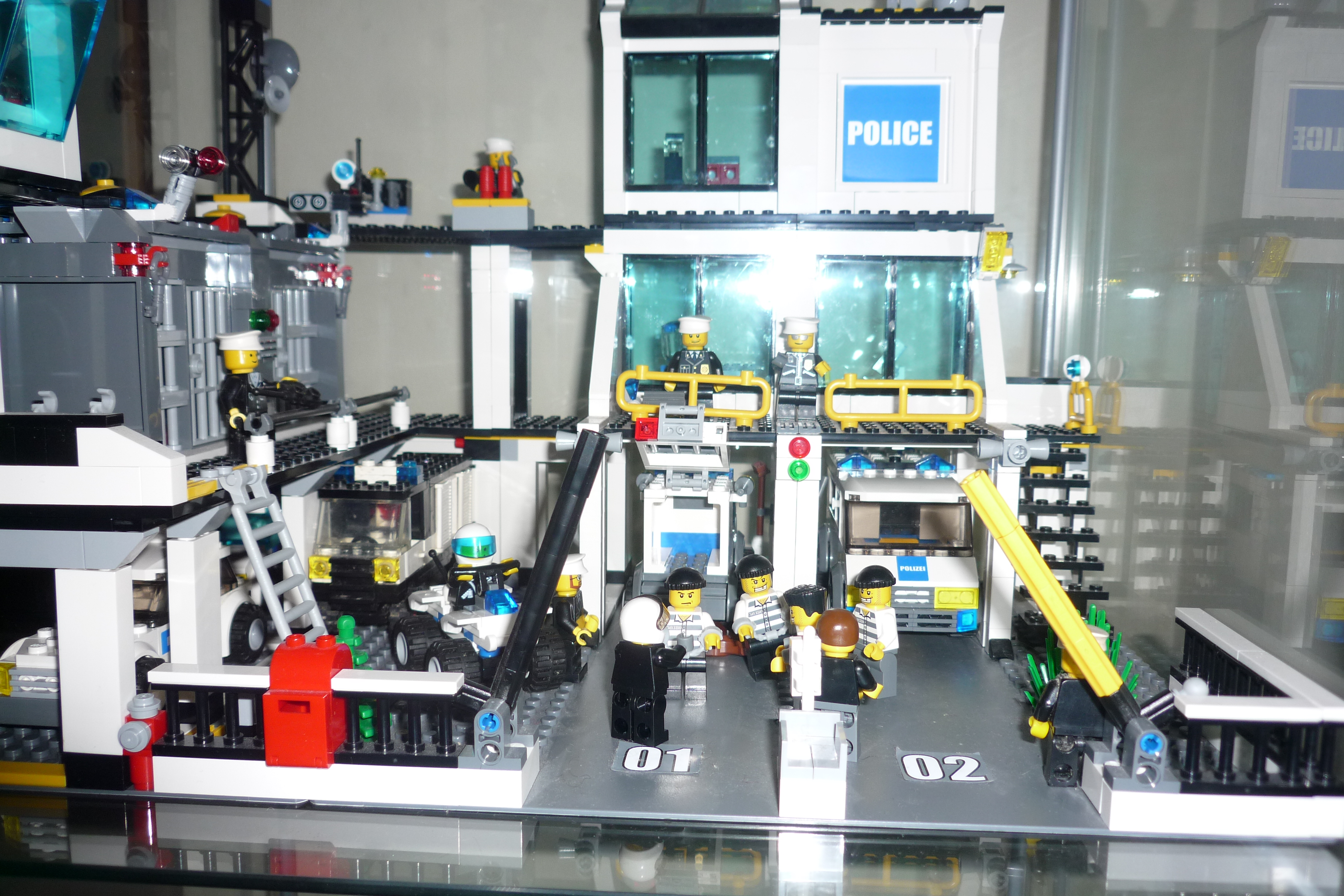 Talking about the vehicles, the motorbike is the usual (and it is still current), the police vehicle is pretty similar to the older 7236, the only differences are perhaps a couple of small details and the windshield color. On the other hand, the dog’s van a good addition to the city. The chassis is small but it has room for everything. The cab unfortunately has no doors and no driver’s seat. At the back the tipper door with the grids is different from the usual vehicles and provide the animals a breathable travel conditions. 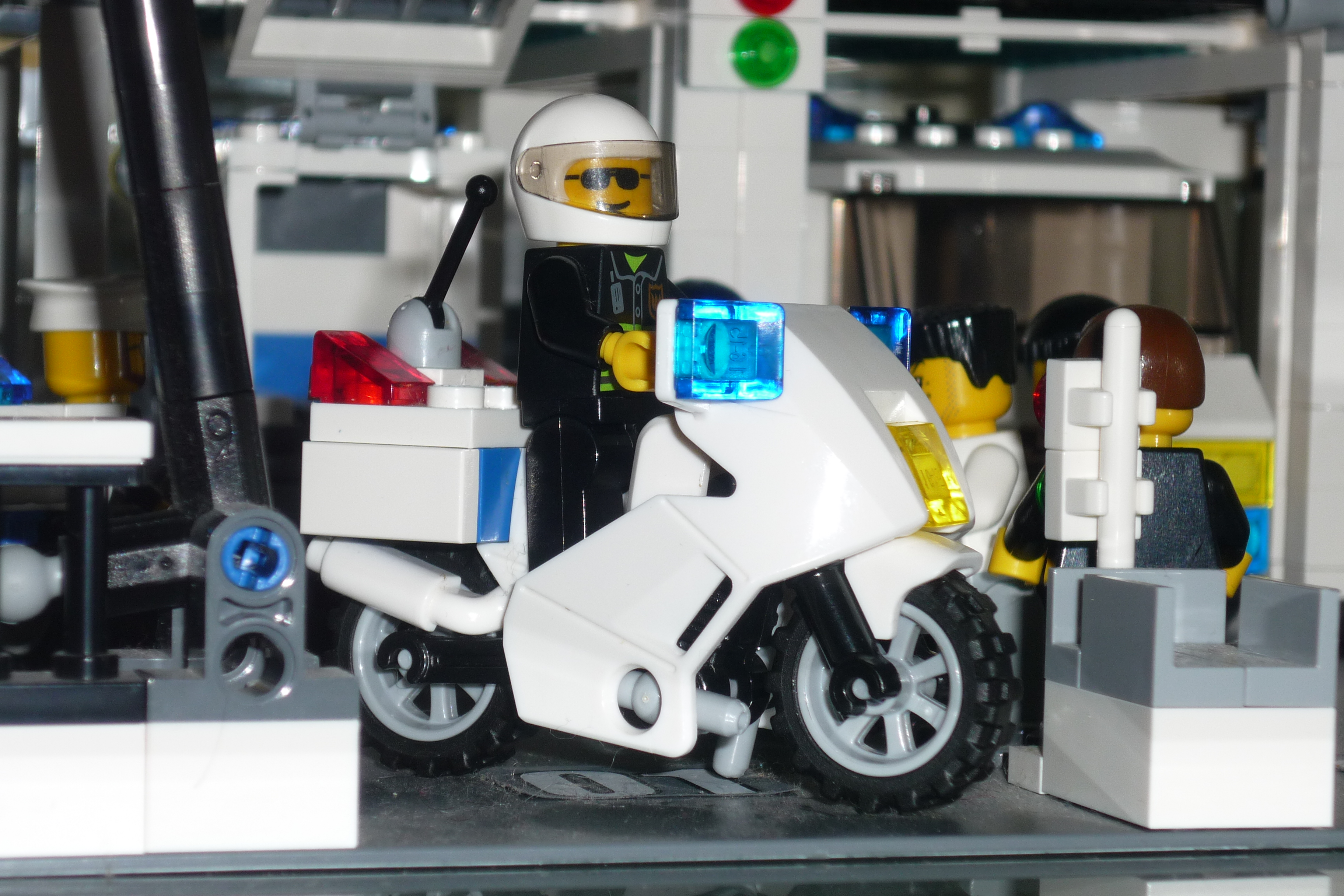 Globally it is just my favorite city set until now. The instructions can be found here, if necessary: