The 2011’s Mobile Police Unit replaces the previous 7743, Police Command Center and the heritage is pretty heavy. The new truck doesn’t add much comparing to the previous one and unfortunately doesn’t have the small police station. It is a huge lost that even the small sport car can compensate.

The Police Unit is moved through a usual truck, where the cab has some small details in order to look like a police truck and make it slightly different from the previous one. The cab has plenty of space and behind the seats (actually there’s only one because the right side is occupied with something that I don’t know exactly what it is…) there is space to store a couple of tools, if necessary. 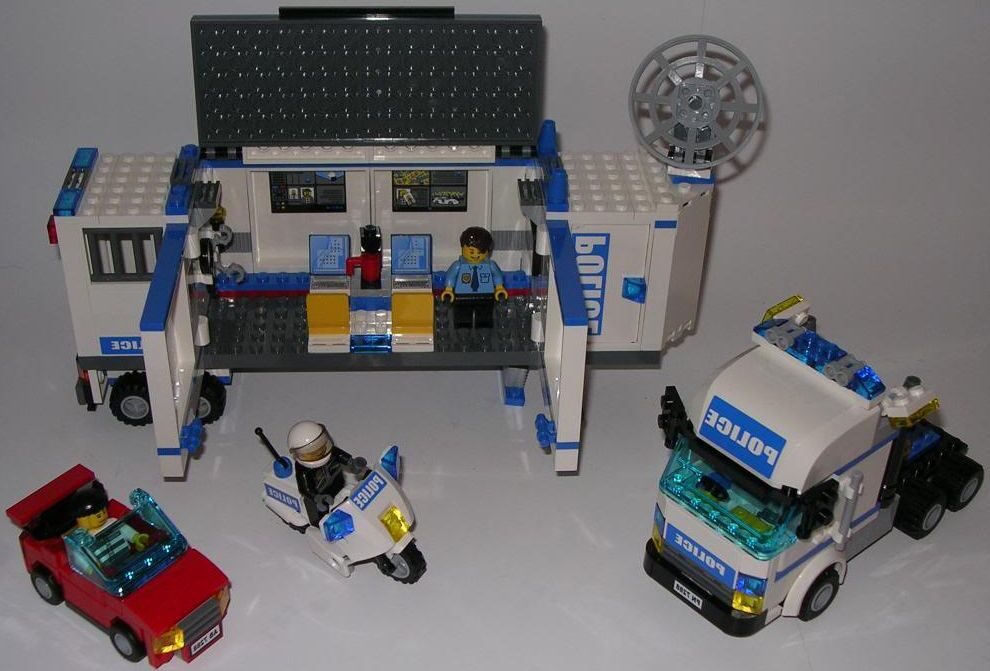 This compartment is easily accessed through two tall side doors. This is perhaps the biggest difference between the two trucks and besides that, it has the same three wheel’s axes and the attaching mechanism uses the same pieces. Even the roof uses, which is easily removable, the same kind of piece.

On the other hand, the big trailer is different but has same quite nice features. Starting by the back of the truck where we can find a jail where the prisoners can stand instead of being seated every time (who cares about their welfare…). In the center, there is the command area and there are some major differences.

This time, the big doors are slightly different. The left side doesn’t open, and the right side has some swinging doors that are not so stable than the “roof” ones from the previous model, because they easily open when the trailer is in movement. Another new is that the roof opens through some technical pieces, I don’t know what is the advantage in terms of realism, but surely increases the playability.

In terms of features and accessories, there is plenty to look and to choose: Two computer desks, two seats (once again I preferred the old seats…) , a small water machine, handcuffs, a magnifying glass, a spotlight, a gold bar to the thief, a big flat TV in the wall and there is even a satellite dish in the roof. Finally in the front part of the trailer, theirs is a store compartment where the street barrier (one more thing that is smaller in this set) and the lights can be easily stored. 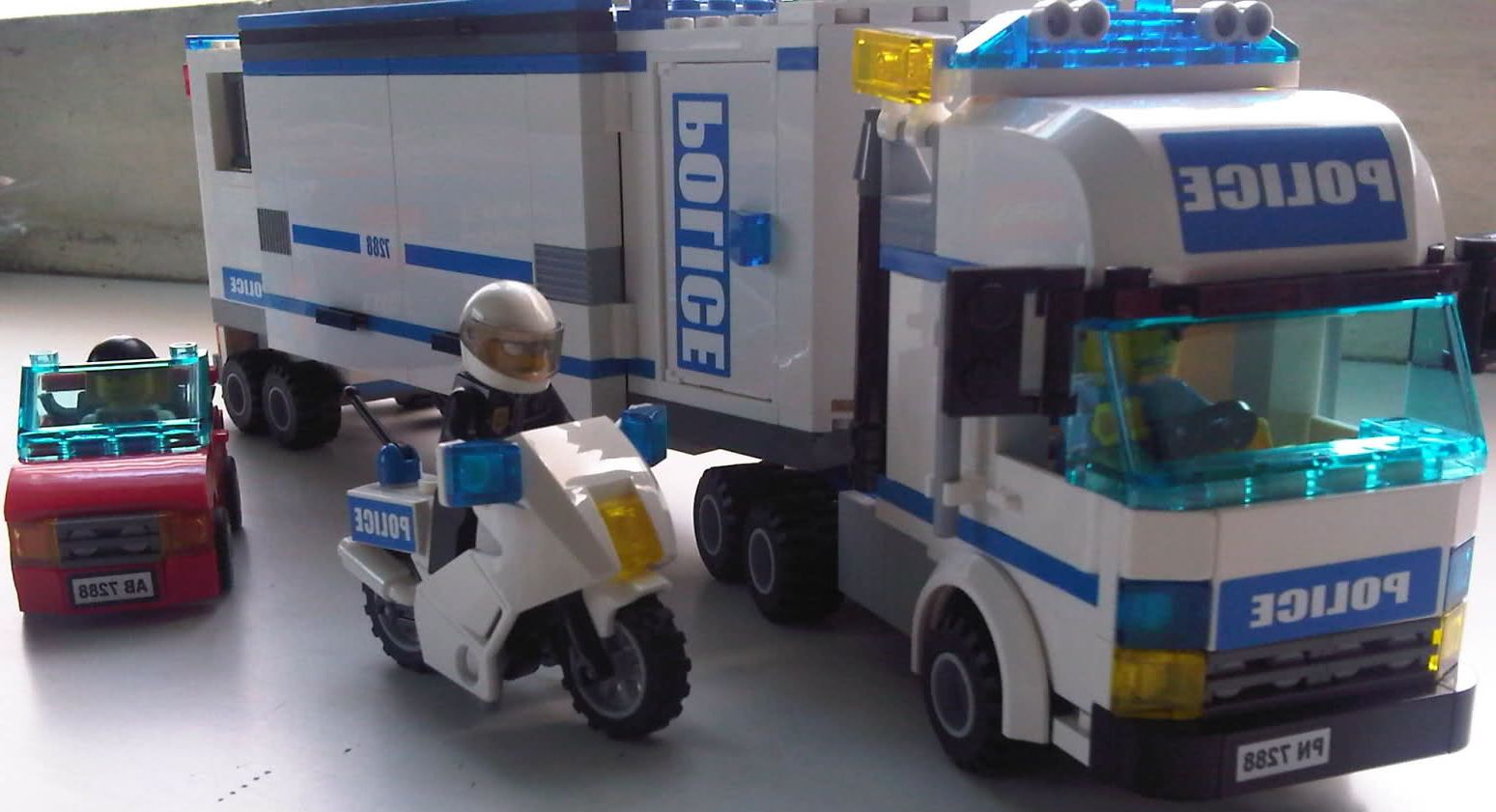 At last, the smaller vehicles and the mini-figures. These are three (one less than the 7743 set) which is low for the set’s features and vehicles. The motorbike is the same old police bike and the red sports car is quite nice but small. It is easy and fast to build, it has a nice back spoiler, but when I look at the side doors and to the windshield I ask, where does the passenger can out from the car? 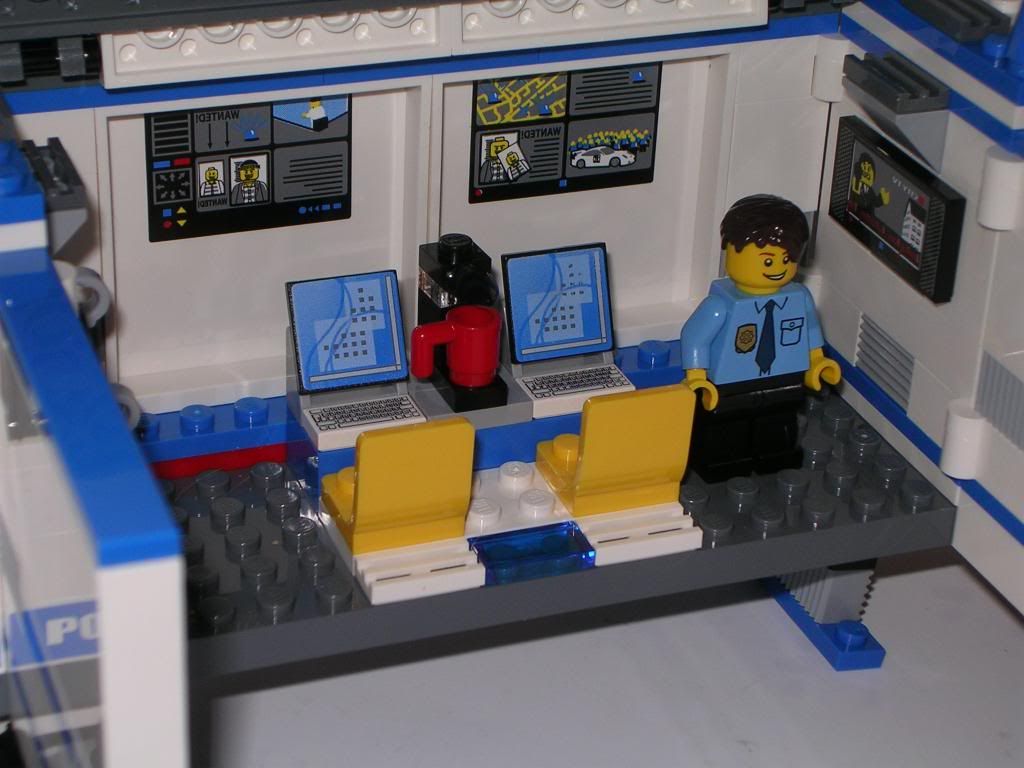 With more than four thousand pieces, the forty dollars that it costs look like a good deal. Honestly I preferred the old set, the small building surely make the difference between them. The instructions are available here, if necessary: