The airport is one of the biggest city sets with more than seven hundred pieces. It brings five figures (a pilot, a ground worker, a flight attendant, a flight controller and a passenger), a big control tower, a luggage transportation vehicle which includes the plain’s stairs, the big red plain and of course the main building.

The airplane is big, very big. Not only in length but also in width. Its wingspan has more than forty centimeters. The main structure is built with six big red pieces attached with technique small pieces, that are reinforced inside with four grey parts. The grey structure will also be the floor’s passengers area. 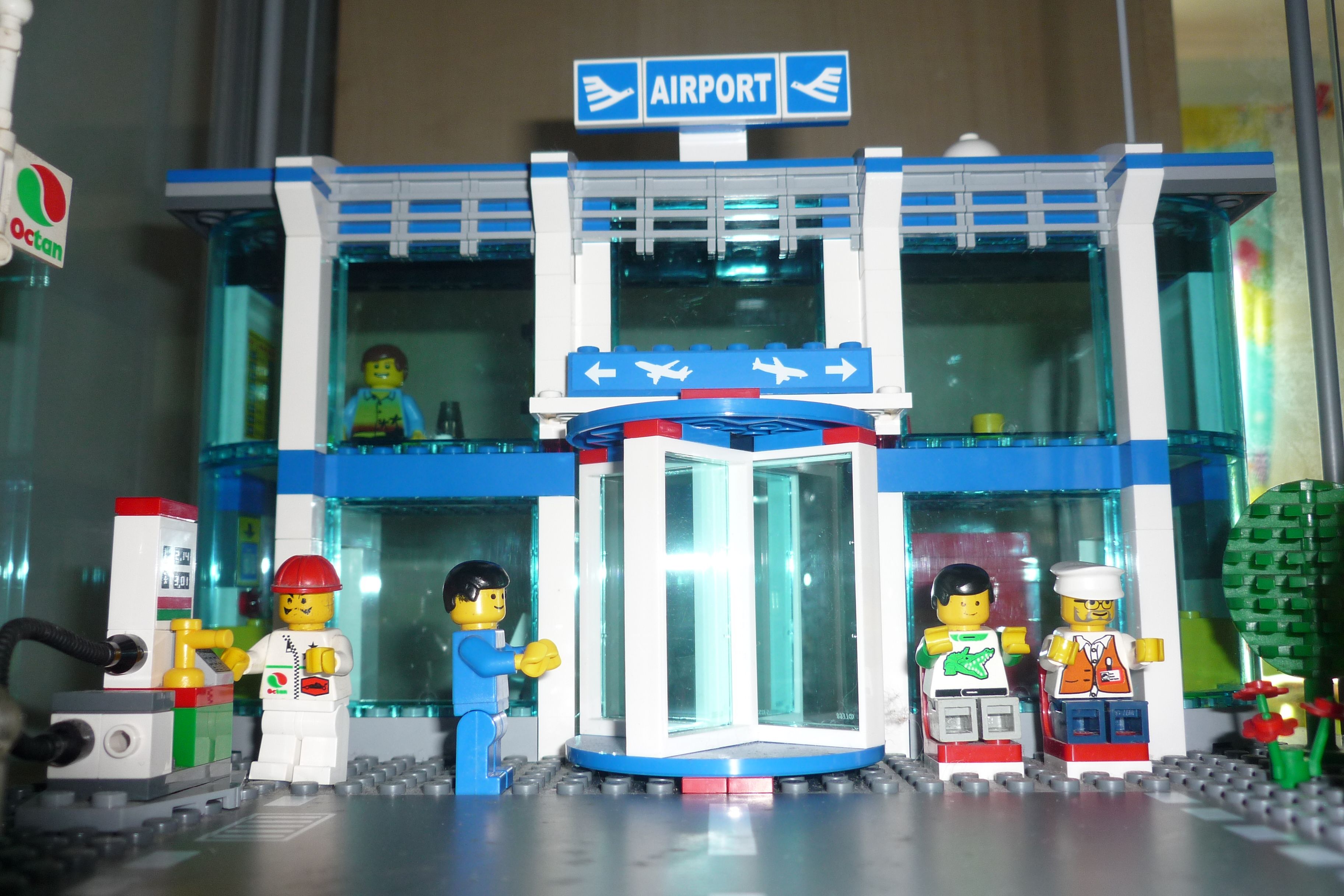 Inside, the space is huge. It has ten comfortable seats and a couple of tables (there is no kind of division between the executive and the economy class) as well as a microwaves and a small sink. In front of the sink, we have the main door of the plain. It is functional and nice in terms of playability but if you pretend to fill the seats with passengers it is better to remove the roof (it is very easy and it is already prepared for it).

The plain cockpit is big, has two seats (where is the second pilot??) and plenty of flight instruments in a central console. At the back, there is plenty of room for the luggage and outside there are a couple of small compartments to store tools or other small pieces. In my opinion, there was enough room at the back to put a small washroom or even a kitchen. Maybe they think about it, next time. 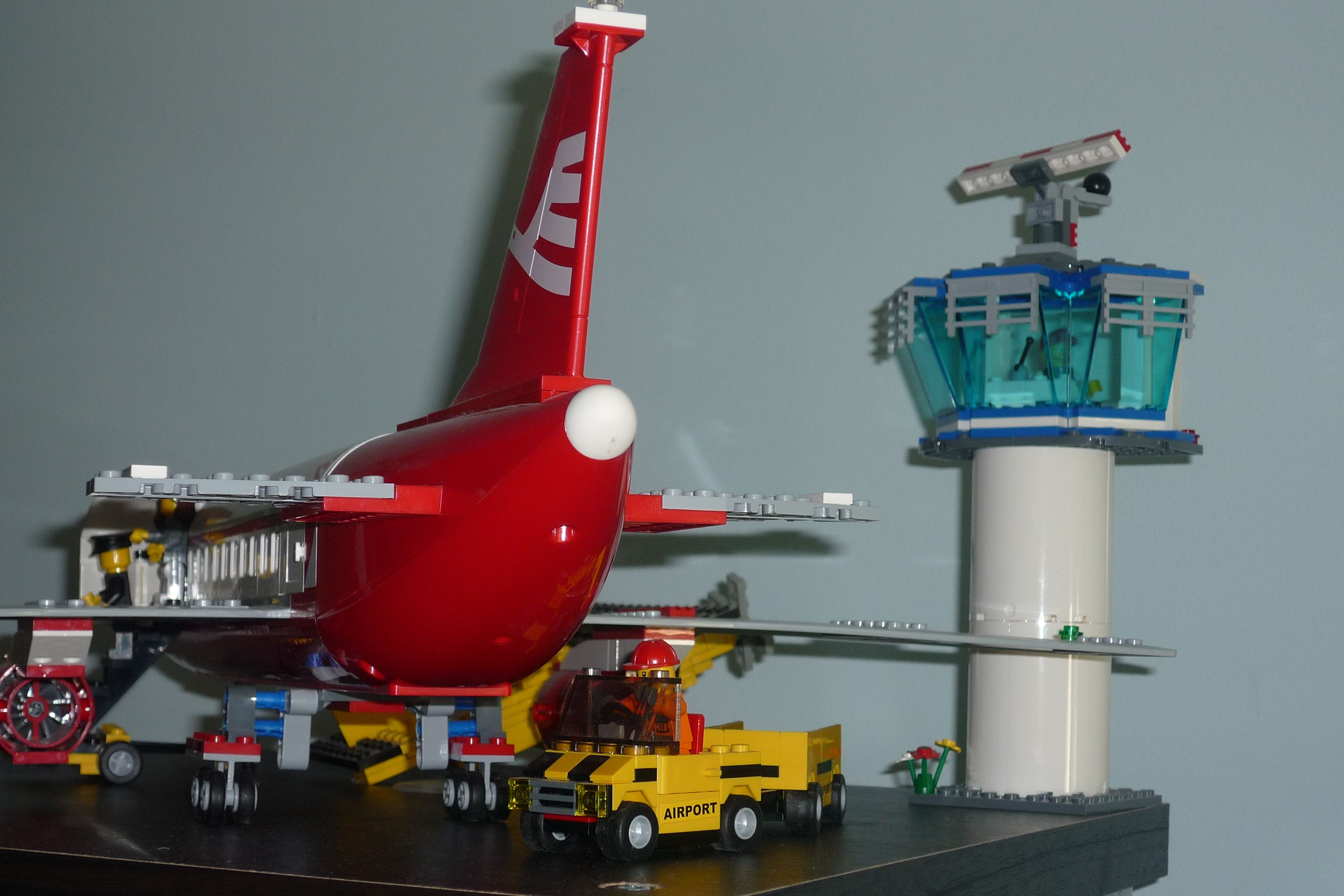 The roof is composed by five big white elements that includes the plain’s nose. Removing it, will surely be the best way to access the cabin. Below, we have the two engines and the landing gear. Well, they are surely proportional to the plain’s grandiosity and not only technical but also detailed pieces produced a nice final result. Finally the red and green lights, on the wings, were not forgotten.

The tower is high and has a powerful radar. Four semi cylindrical pieces give the tower the appropriate height. In the second floor, the controller has plenty of instruments and glass all around the tower. In the roof a 360º turn big radar will ensure the appropriate communication with the plains as well as an extra dose of fun and playability to the set.

The yellow ground vehicle is composed by three elements: the main vehicle, the luggage transport trailer and the plain’s stairs. The little car has a couple of small doors, a seat and space for the worker’s lamps. The trailer has plenty of space for the luggage (it can add some extra luggage from other set) but it should have in the back a small door, otherwise the suitcases will fall from the trailer.

Finally we have the second trailer that is the access stairs to the plain. Basically the stairs are a single piece common in other city sets such as the train station or even the police headquarters, mounted on a small trail structure. Personally I usually put it attached to the plain with the flight attendant on it. 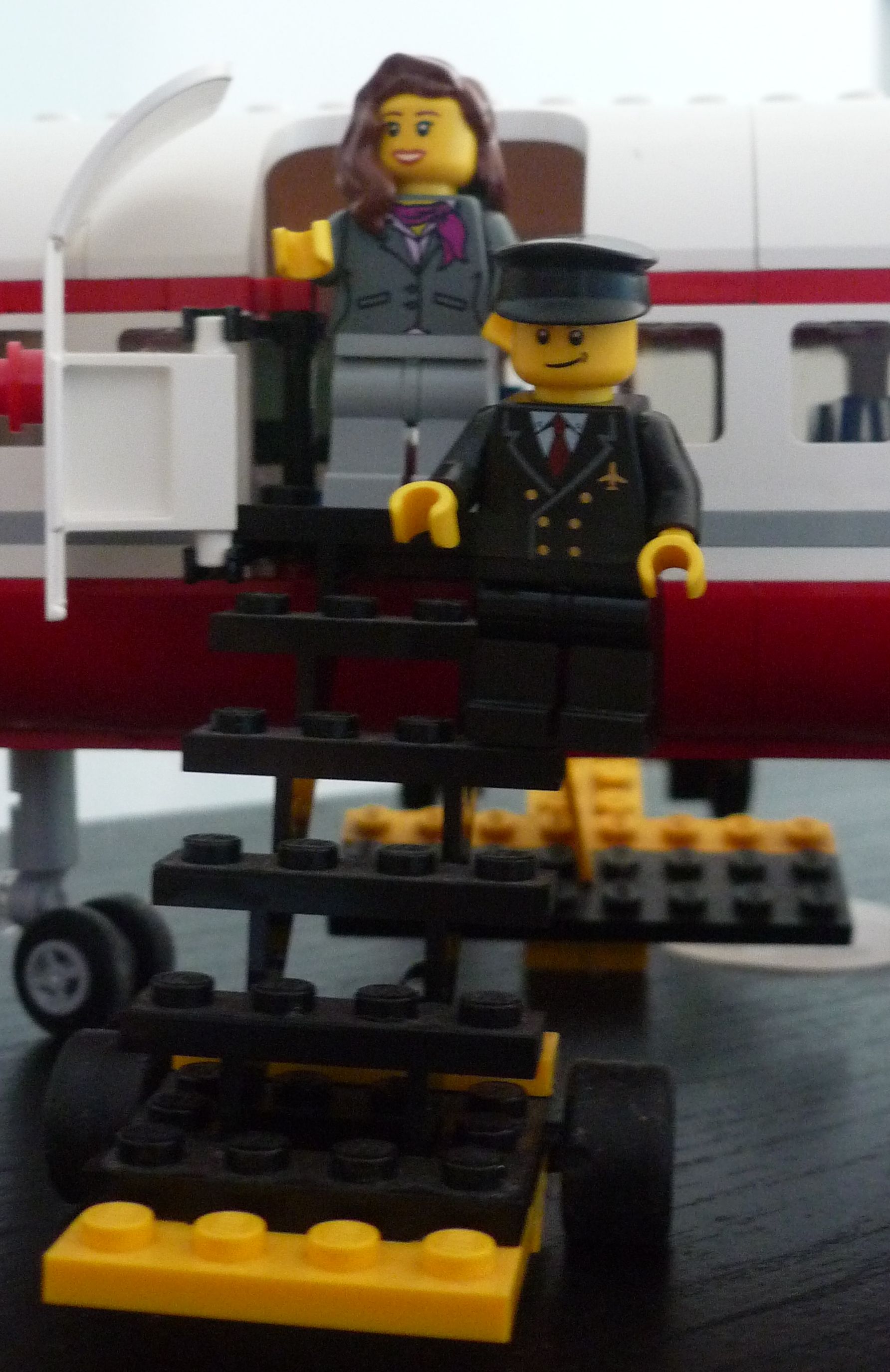 The main building has two floors with plenty of features and playability. The first floor has a luggage scanner and a x-ray machine, a drink machine and a internet area. In this floor we have also the airport’s entrance which is very impotent because it has a big revolving door with plenty of glass not only in the door, but as well as in the all building structure.

The second floor has a resting area with two seats and a table and in the opposite side a coffee machine. Generically, inside, the building could have a better disposition, specially in the first floor (it could be a single but bigger space with more features and functionality), and  the airport could also have a couple of extra figures. If the five figures are putted in their places, this area will surely become desert. Outside, a couple of seats a lamp, a road sign (where is the park?) and a green garbage can, compose the entrance.

Forgetting the set’s price, this is one indispensable set in the town. The building, the big red plain and the control tower will surely improve the city’s level. This 2010’s set is huge and in terms of playability is one of the best city sets. If necessary, instructions can be found in here: