This Cars 2’s set recreates the Finn McMissile’s Oil rig escape, in the movie’s first action scenes. The set contains five characters: McMissile, Grem (the orange and rusty Amc Gremlin), Professor Zundap, the Yellow Crane and the “dead” Lillan Turbo. First of all, comparing these characters with the real one they look quite good.

Professor Zundap is as small as in the movie. With a six dots’ length and the smallest available wheels it is easy and fast to build. His evil face and the corresponding monocle couldn’t miss. Lillan Turbo is perhaps the fastest car to be built in Lego history. As you probably know at this point of the movie it has been smashed, so as such, it is just a cube. 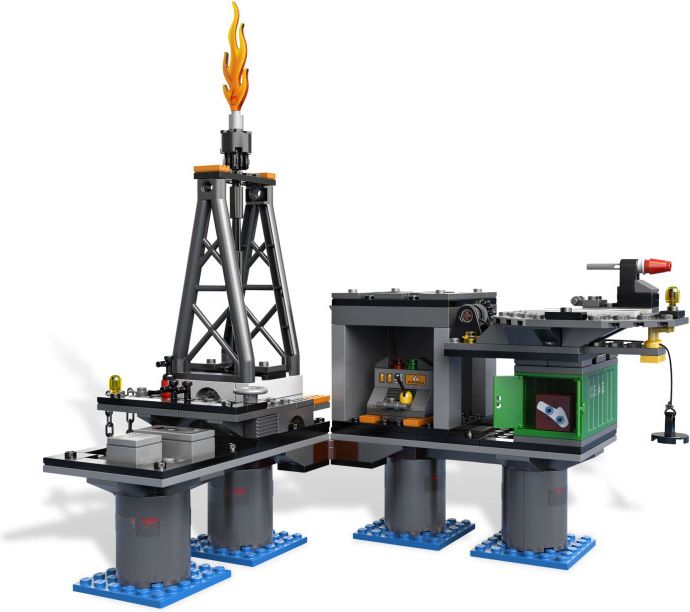 Grem is also small and (not as small as professor) easy to build. Nothing much to say except two things: The piece that represents it face is quite unusual and in both sides there are some weapons. On the right, there is a flame thrower and in the left a rocket launcher (in this case, rockets can be lunch by giving a small hit in the back – nothing much this mechanism).

McMissile, the hero in this scene, is prepared to dive and ride in the water. It has no wheels but instead it has two boards that will let him escape (until certain point) from the big boats. Mc Missile is rather well realistic and has weapons like Grem: a Rocket launcher and a shotgun. 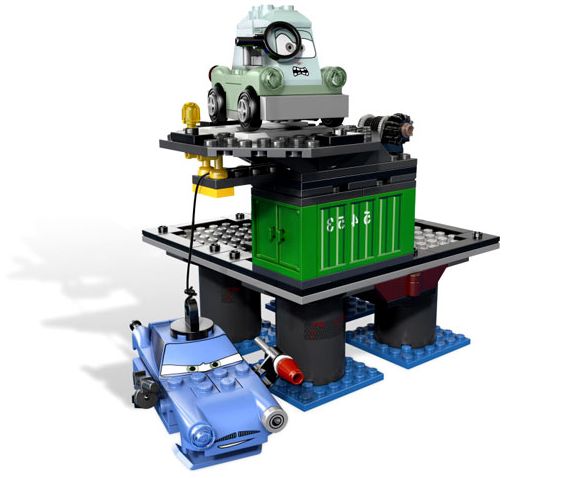 Talking about the platform, it is not very big, but can open in the middle giving a different perspective and options in terms of playability. On one side we have Lillan Turbo container that uses the old window pieces as the doors and Professor’s place in the scene. Next to the professor there is a squeal with a magnet (For catching McMissile??….) 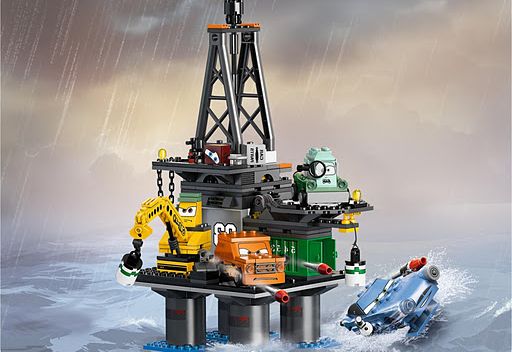 The other side of the platform has room for the Yellow Crane, which will give a tremendous help in Mcmissile’s escape, a small command center and in the top of it the oil rig with some tools and accessories ( a lever and an extinguisher, for instance) and a big flame. This is definitely a fine set, with lots of playability scenarios especially if you have the big boats, that are available for instance in the 8426’ set.

This 2012’s set is a bit expensive. With more than four hundred pieces but a price nearly 70 €, you‘ll have to love the movie in order to bye the set. If desired, you can find the instructions here: