The Shredders’ Lair Recue is a new Teenage Mutant Ninja Turtles that recently has hit stores. With almost five hundred pieces that puts it in a price level around the sixty dollars, it features the Shredders’ Lair, a structure with two levels, a small but cool yellow aircraft for the turtles, and five mini-figures: two Ninja turtles (Michelangelo and Raphael), Shredder, a foot soldier and a Robo Foot Ninja.

Besides it, the set brings also a couple of additional accessories such as a couple of brown racks for the weapons (some of them are golden which look definitely great) and a small but nice flipper which will easily throw the figures.

The lair is a middle size structure with two different levels and some really nice features to play with. The ground floor features a central purple stair that collapse just as the turtles step on them. Just as they fall down they won’t have a good destiny because just below the ladders, a big saw blade is ready to cut them in pieces.

Just aside the stair, two symmetric scary places hide a dungeon, on the left side, and on right a small compartment for the weapons’ racks. The small cell has a black gate with a bar and plenty of white sharp teeth. All this is covered with three white plates that will be the base for the Shredders’ throne. 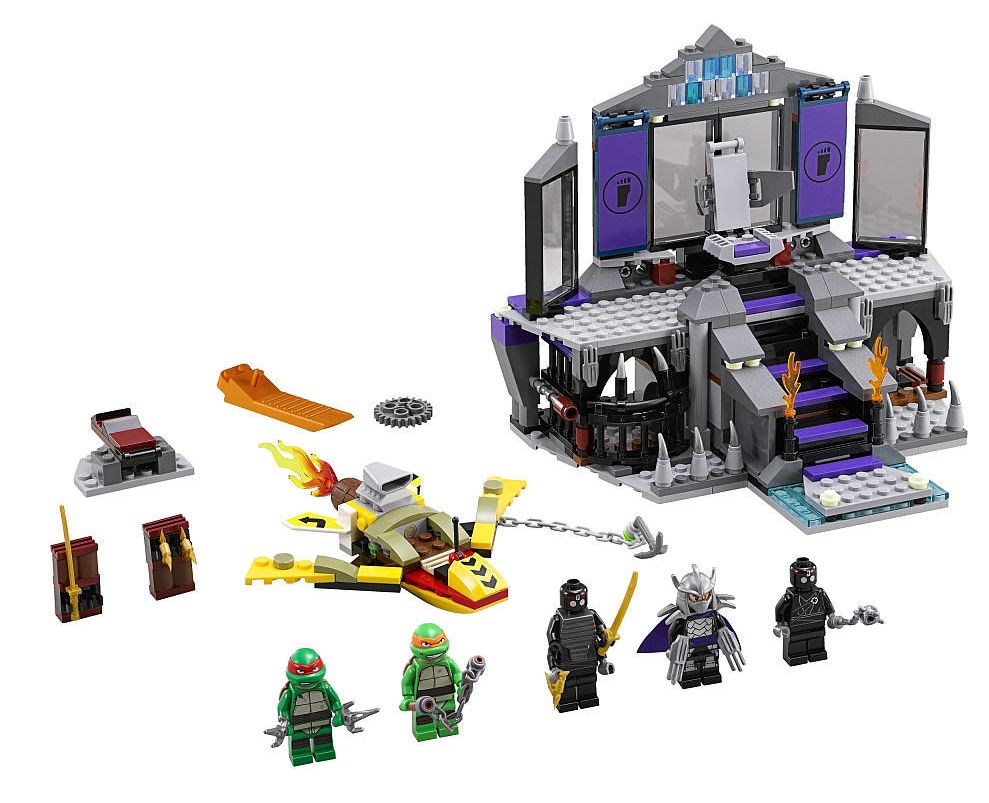 The throne has a central chair which in case of emergency, to escape from the turtles, is easily transformed into a flying pod. Behind it there is a symmetric wall with some purple panels that seems to bring a couple of stickers, which in most of the cases I pass. Finally, the small technic pieces, at the bottom, suggest a nice mechanism for the Sheredder’s escape. Having a look at the turtles’ vehicle it seems rather pretty and with some really nice details. With a cockpit that includes some handlers and a big engine at the back, the right wing has also a nice hook to blast the dungeon door and rescue the prisoner.

Overall, I must say that after seeing the next summer wave of TMNT sets, I think that this one looks a bit disappointing. The Lair, that is for obvious reasons the main attraction, didn’t excite me at all and despite its beauty, the other elements, namely the turtles’ vehicle and the mini-figs won’t have enough arguments to convince me to achieve it. Please enjoy the pictures and take your own conclusions!