The Turtle Van Takedown is a new Teenage Mutant Ninja Turtles set that is based on the Michael Bay TMNT movie and represents a scene where a Foot Soldier barricades the road using a blocking gate. The action doesn’t end here because Vern and Raphael are attempting to save Michael Angelo from the arms of a small mechanical structure!

As you might have guessed already, the set will contain four mini-figures, the big (almost…) cubic Turtle Van, a really nice street barrier, a small arresting structure and a bunch of assorted weapons for each one of the characters among a total of exactly three hundred and sixty eight pieces.

Starting by the accessories, the road gate is built upon a small grey platform with space for a few interesting elements. At a corner, there is a black tower with a spot light and a surveillance camera, next to it a gas cylinder and finally the barrier that I suppose can be controlled with a small knob, at the back. The mechanical arms can be moved easily and on top we can also see a small red light and a power manometer.

Now comes the coolest part, the vehicle, which I definitely enjoyed it. First of all doesn’t expect to drive it in the city plates because it is considerably larger for that. The wheels are also very big and quite unusual just like the roof which being filled with several similar bricks has more than enough space to make put there Michael Angelo and Vern fighting against the Foot soldier. 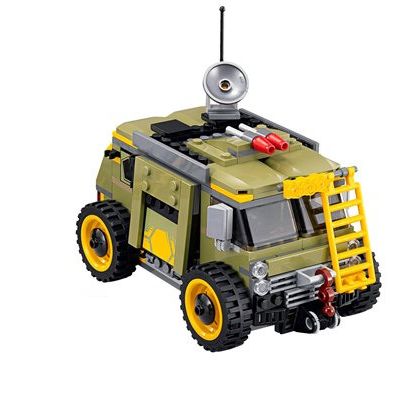 The cab has a double windshield, a small winch just at the front and some yellow ladders to climb up to the roof. On both sides there is a big door that once opened gives access to some extra flick-fire missiles. It’s I pity that for now that there isn’t any kind of pictures from the interior because all that size definitely seems to hide some other nice details.

For around forty dollars and after what I’ve seen in the first 2014 wave of sets, this is until the moment one of the best TNMT sets. With plenty of action, the turtles’ van is absolutely great as well as the four mini-figures. Enjoy the first official pictures!