The Constitution Train Chase is a new and amazing Lone Ranger’s set and a good addition to the Lego train’s world. It has a steam locomotive and three nice wagons: one for carry the coal for the engine, another one that is basically a platform for weapons and a huge rotating chain cannon and a third one that is a prison.

The number of pieces is not known yet, however the set brings a respectable number of mini-figures: seven (!!) which are Tonto, The Lone Ranger, Butch Cavendish, Rebecca Reid, Rebecca Reid’s Son, Latham Cole and Captain Jay Fuller. As you can see it’s a bunch of new additions, some of them exclusive of this set. 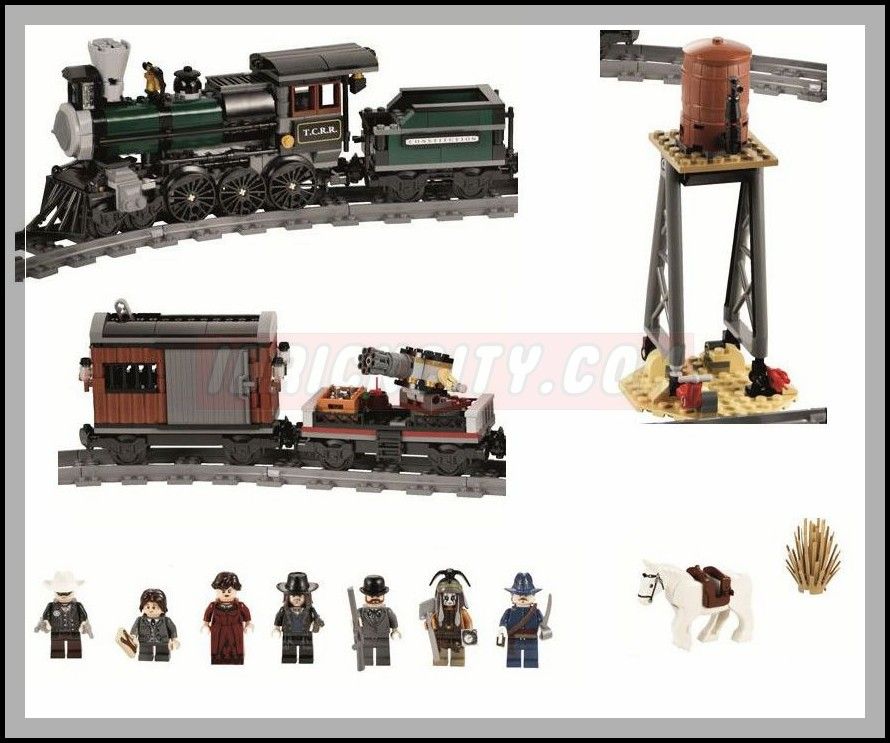 But the features don’t end in the train or in the figures because besides them, the set also brings a nice water tower that will be used to slow down the train, a stack of rocks to be blown with dynamite, Silver, the Lone Ranger’s white and faithful horse and finally a great surprise that wasn’t clear on the first lone ranger’s pictures: a complete rail track with a considerable number of rails.

The set’s main idea is based on a train chase to save Rebecca and its son from the evil Butch Cavendish and his two crooks, Jay Fuller and Latham Cole. For that, the Lone Ranger, raiding its white horse, will have the help of Tonto that blowing the water tower will make the train stop in order to release the two prisoners. 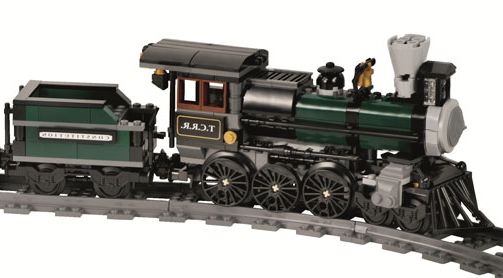 Having a look at the Locomotive, I would say that it is fantastic, even better that the first cartoon pictures, might suggest. Unfortunately it is not powered which definitely a bit unpleasant but is understandable because it would increase a lot the final price. Built mostly with black and dark green pieces, it has a long engine chamber and ten fantastic wheels. At the back we can also see a big cabin for one of the three bandits, which has four nice little brown windows and I suppose a few handlers for the driver.

The coal wagon, which is the smallest of the three, has the same color scheme of the locomotive, namely the dark green color and a big sticker saying “constitution” which on my opinion is completely dispensable. Besides the coal’s deposit it also seems that it has a secret hideout perhaps to hide a few stolen things. 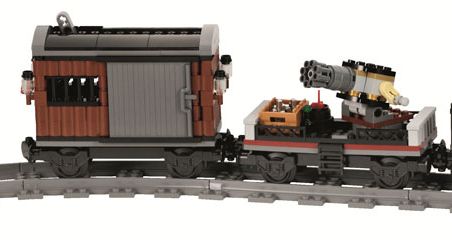 Next to it (according to the picture, of course…) the gatling gun carriage is the simplest to build but at the sometime the most harmful. It has just a flat platform with a huge rotating weapon – that can be triggered with a side Knob – and a box filled with dynamite to attack Lone Ranger and Tonto. A curious detail on this weapon, the bullets chambers are built with four little pieces that are commonly used not only as a binocular but also as the trucks’ horns.

Finally, there is the prison wagon that carries the two prisoners. At the first glance we can see in the roof a little technic piece which surely anticipates a feature on that part of the wagon, perhaps something related with Tonto’s dynamite. The Wagon, just like in the movies, is built mostly with wood, which explains the bunch of brown little bricks. There are also a couple of black bars and a grey gate that slides along the little wagon.

Yes, comparing with other trains, these three wagon are really very small, if you take a look for instance in the coal wagon, I would say that the distance between the wheel axis, is only a couple of studs. Despite that little detail, this train looks really good, making me remember a couple of other different models. Looking at the water tower, it is built over a small platform and the fun is in its base. Here we can see a few technic pieces, red dynamite and at least a lever which indicates that some how the tower might fall onto the rail tracks.

Overall, this set looks huge. The details not only from the Constitution Locomotive but also from the three wagon as well as its features surely worth the ninety dollars that it will cost. Unfortunately it is not powered but on the other hand it has a complete rail track, which is an issue that not every train sets can commend.