This is another great Hobbit set that has just hit stores. The Battle of Five Armies brings exactly four hundred and seventy two pieces and intends to recreate a huge battle at the Ruins of Dale, featuring for that an impressive fortress, a big battle machine, seven mini-figures (Azog, Legolas Greenleaf, Thorin Oakenshield, Dain II Ironfoot, Bard the Bowman and a couple of Gundabad Orcs) and a Gwaihir figure.

The Ruins of dale are basically in this set a watch tower with three different levels with a bridge next to it. I must say that I’m quite impressed not only with some huge details but with the bunch of different features that the set brings which is absolutely great in terms of playability.

Having a look at the Orc’s Machine, it looks absolutely powerful and detailed. Built mostly with brown wood bricks, most of its features use technique pieces. On top, the couple of launchers with two long spears, which are handled and triggered in the back, seem to have power enough to take down the mini-figures and even some parts of the bridge, however I would say that it can’t move up or down or even rotate, so the distance to the target will have to be perfectly calculated if you don’t want to miss the shot. Most of all, in this vehicle, I like the extreme detail that it brings all around, indeed quite amazing. 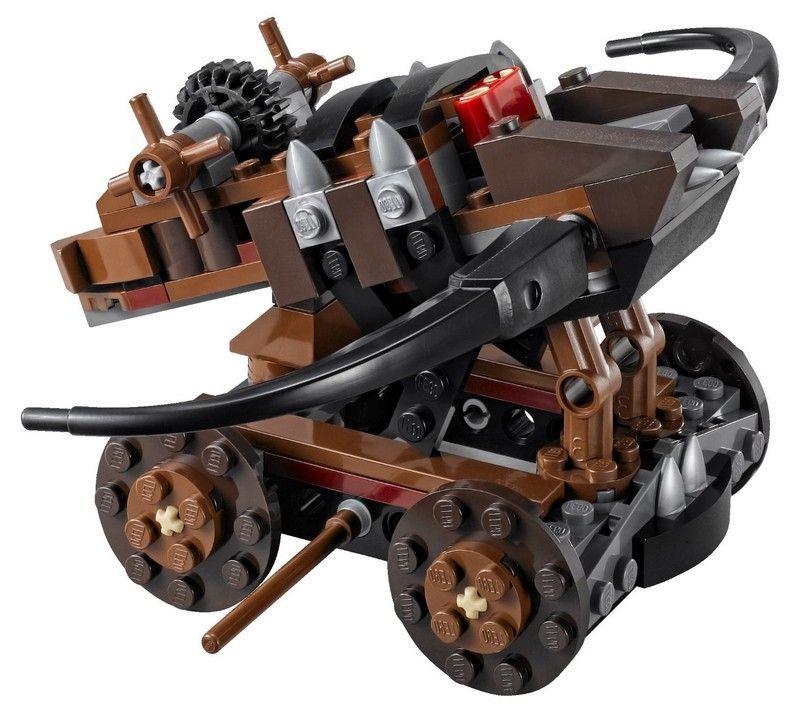 The building is clearly divided in two, the watch tower and the bridge, both with a ruin look as expected. The tower’s ground level is a naked room sculpted in the middle of the rocks which in last case is good to store the several different weapons that the mini-figures have. The second level would be similar to the first if it didn’t have an exploding wall which is a nice feature that can be triggered just aside it. Globally not only this level but overall the entire structure looks very beautiful in terms of color using mostly a light brown mixed with the grey of the rocks. Finally on top, the watch tower looks intact, with four arches and a dark red roof with a single stud for Gwailhir.

The bridge that can be easily detached from the tower is really in poor conditions. Thanks to that and just like the tower, it features also an exploding mechanism just in the middle, which can be easily triggered with the green brick. On the edge the steps aren’t much and bring below them a nice white skull. There are several separated boards all over it and on the opposite side, a couple of pins ensure the correct attachment every time you want to join the two elements. 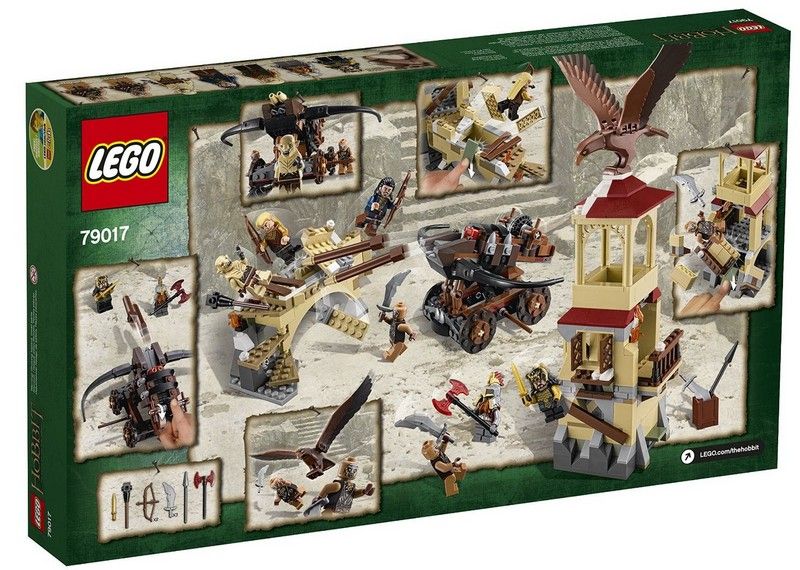 The mini-figures once again are excellent, there are also two details that are exclusive of this set, namely Thorin’s Oakenshield’s crown and Dain’s helmet and the weapons’ arsenal is huge: two longbows, a mace, a red ruby axe, short sword, a spear and three Orc swords which is absolutely outstanding! The set is already available and is retailing around the sixty dollars which is in line with the rest of the theme. Enjoy and have a look at the gallery: