The Mirkwood Elf Army is a new hobbit set that will soon be available on retail. Based on the new movie, the Desolation of Smaug the set will bring exactly four hundred and forty two pieces, featuring seven (!!) great mini-figures (Warg, three Mirwood Elf, a couple of Gundabad Orcs and Thranduli) and an interesting fortress filled with some nice interesting details.

The fortress, which I must say, didn’t impress me too much, is not very tall but gladly can be split on several elements or even be attached to a second one (which preferentially has to be equal…) increasing a lot all the playability and the fun that this set might have.

With multiple color bricks and some nice sharp elements, the fortress is constituted by a long wall with battlements all around and a big tall brown tree which hides plenty of action, because it is not only the tallest point to observe and fight the enemy but also because it hides a powerful catapult to throw the warriors against the enemy. 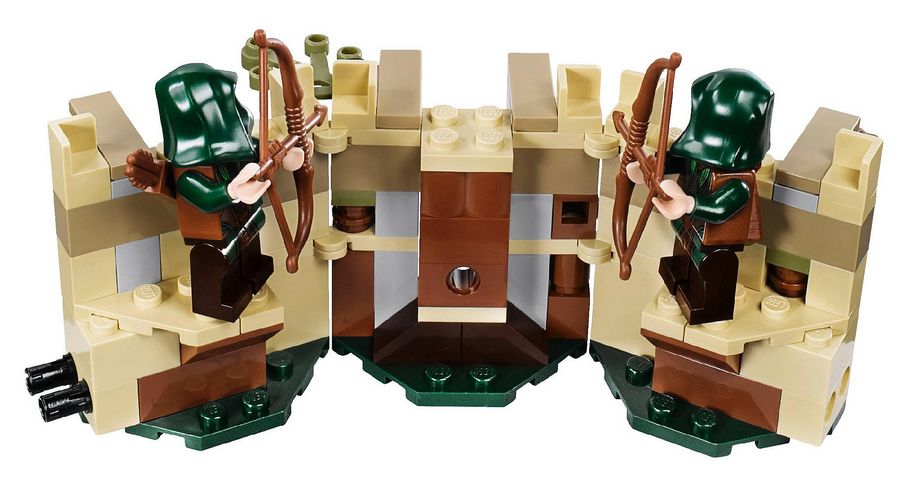 Below, at the back, there’s also a small compartment with a barrel that obviously will be one of the targets for the Gundabad Orcs. These will have the help besides the bunch of weapons (spears, swords) typical of these sets, of a big black ladder with two hooks that easily attach to the battlements and of the big Warg and its frightening look.

The wall when detached from the tree can assume multiple positions thanks to its movable mechanism that can be easily seen in the pictures. Finally at a corner there is a small space to store a couple of swords every time it’s necessary.

Having a look at the six mini-figures, like them or not, they are extremely accurate with nice printed bodies, that in case of the Orcs are all over across them, including the head, and some nice details such as the Elf’s green hair or even the long blond hair of Thranduli mixed with the golden crown.

Globally for forty dollars it doesn’t look a bad deal, despite my doubts with the wall. The mini-figures are simply awesome and I think that this set will certainly improve all its potential when put aside with another from this wave. Have a look at the gallery: