The Royal Talon Fighter Attack is a new Marvel Super Heroes set that is recently available on stores. With exactly three hundred and fifteen eight pieces, it features a black aircraft with plenty of small details and four mini-figures (Black Panther, Nakia, Ulysses Klaue and Erik Killmonger) with assorted accessories.

This new Aircraft is different from everything with all the consequent pros and cons. Right at the front it has a big cockpit with a long windshield that opens widely for a better access. Every single part of the Fighter is built with small black pieces and the interior is no exception, where it’s possible to find a seat and some handlers.

Just behind it and right in the middle of the aircraft, there a small compartment, which is supposed to be a prison, where a mini-figure can be easily captured. In terms of weapons, besides the individual ones, the fighter has two stud shooters ready to open fire against anything that moves. 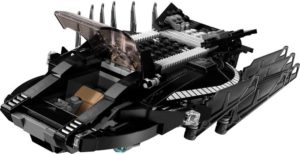 At the back, there’s space for the powerful engines and also for a couple of small stabilizers. Globally and all around the aircraft, there are plenty of sharp pieces that give the vehicle a really cool and detailed look. 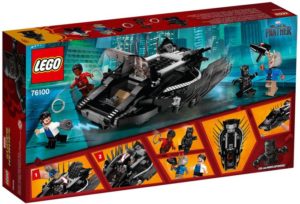 Overall, it’s a pretty interesting set. The aircraft is pretty well design with lots of features and small details, the mini-figures look pretty cool with nice colors and best of all, it’s seems a pretty interesting deal: thirty bucks looks absolutely a good value for money if we attempt to the piece count. Enjoy it!