The Tanker Truck Takedown is a new Marvel Super Heroes set that will be available next summer, probably in August. Sometimes the simpler things are the best and this set definitely seems to follow that thought, showing some great figures to enjoy and a vehicle with plenty of playability.

With a total of three hundred and thirty pieces, the set includes as the head elements, the yellow and grey truck, a purple motorcycle, a small island with a windsock, and four mini-figures (Spider Man, Hawkeye, Captain America and Vision) with assorted accessories that include flames, a fire extinguisher, a super jumper and assorted weapons.

Not being a total expert of this set context, I must say that I like this truck. The front looks quite unusual but funny at the same time, being considerably shorter than usual. The front wheels are clearly a bit back than usual and inside, the cab looks very tight but with no kind of barrier in the back. 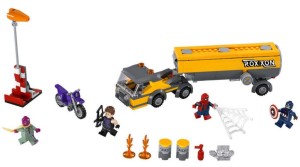 The trailer is another action element, showing some nice features to play with. First of all, the top as you can see in the set box, opens in two, fire can be set and flames can quickly appear, thanks to the knob placed near the wheel, which is one, overall, of the scenes that the set intends to recreate.

The island with the windsock is built with plenty of small pieces and seems to be also a great addition to other sets or scenarios.  In terms of mini-figures, I guess that they’re also one of the main reasons to achieve this set, because it’s not easy for sure to get the hands in these four guys at the same time, especially if Vision is with them. 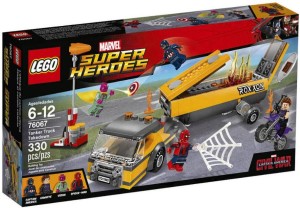 Globally, it’s a nice and interesting deal for sure. The truck looks simple but it surely presents some nice features to play with. The mini-figures are an added value and one the main reasons to achieve it, and talking about this, it should be available on stores (rumors mention the possibility of being a retail exclusive) next August with a price around the forty dollars.