The Spider-Man: Ghost Rider Team-Up is a Marvel new Super Heroes set that has recently hit stores. It’s not very big, comparing to most part of the other in this wave, and features only two hundred and seventeen pieces but with these, you certainly find some nice elements to enjoy!

As you can see through the pictures, the set includes a powerful bike, a small but always useful island with some traffic lights, a garbage can and a couple of mail boxes, a purple jet, and three great mini-figures (Ghost Rider, Hobgoblin and Spider-Man) with plenty of assorted accessories that include cards, some flames, a net for spider man and a big golden chain.

The bike looks pretty cool and powerful, at least according to the flames that come out from the exhauster pipes. With a few technic pieces in the base, it shows two large wheels of different sizes and a nice seat in the middle with some handlers and the big engine, placed right in front of them. 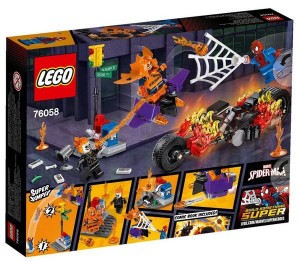 The tiny jet isn’t pretty but seems quite useful in terms of playability showing right below the seat, a couple of stud shooters to fight back the bike. The mail boxes and the traffic lights are absolutely a nice addition and tell us, at least according to the stickers, that we’re in New York! 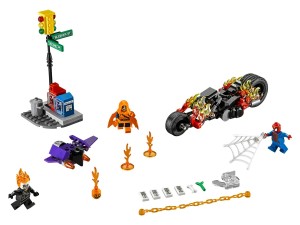 Finally the mini-figures, which are simply awesome (I would surely highlight Hobgoblin!), with some nice printed details and useful accessories. Overall, for around twenty five dollars, this seems a pretty interesting deal with lots of playability and three interesting features. Enjoy the pictures!