Batman: Rescue from Ra’s Al Ghul is a new Dc Comics super Heroes set that has just hit stores. With a small size, it has only two hundred and fifty seven pieces, and features a Batman’s Buggy, a desert hideout, four mini-figures (Desert Batman, Ra’s al Ghul, Robin and Talia al Ghul) with assorted weapons and some extra accessories such a small catapult or a Pit Area with a green toxic liquid.

And at the first glance, I really like this set. The buggy isn’t very big which is good in terms of handling and playability and Ra’s Al Ghul desert hideout has definitely three or four great elements to enjoy.

Having a look at Batman’s vehicle, it is built upon a solid structure and the big tires are placed right on the edge of the suspension. The cockpit seems pretty large and shows a couple of protection bars, usually used in the buggies. Inside the usual: a decent seat for batman and a steering wheel to maneuver the vehicle. At the front and aside the drive, it’s also possible to see a couple of lights probably to see the big gate. 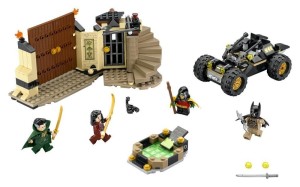 The big brown gate is the entrance to the hideout. With two big doors, the idea is to crash into the gate and enter to save Robin that is arrested in a cell, at the right. The entire structure, including the stairs and walls, is all built with some light brown shades which definitely gives a pretty cool desert look.

Surrounding the cell, there’s a round stair that goes right to the top, where a trap ensures that the prisoner might have some extra problems just as he leaves the cell. Just by triggering a lever, a big axle is automatically activated and I’m sure that the guys will not want to be smashed by this trap. This is certainly a nice feature in terms of playability! 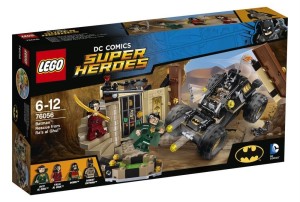 The mini-figures look quite interesting and I especially enjoyed Batman’s desert suite. For around thirty five dollars (a bit over priced) I would say that this absolutely a very interesting set. The buggy is surely quite funny to play with and the hideout has certainly some nice features to enjoy.