The Gotham City Cycle Chase is a new DC Comics set that has recently hit stores. This twenty dollars set has exactly two hundred and twelve pieces and features a batcycle, a motorcycle for Harley Quinn and three mini-figures with enthusiastic weapons: Deadshot, Harley Quinn and Batman.

The cycles are definitely the queens in this set! Both of them use extra large rubber tires (ok, the back one from Harley Quinn is not so big) and a technic structure as a base but each one them shows some different but awesome details at the same time.

On the batcycle, the first thing that caught my attention was the lying driving position to handle the bike. There are no studs for batman and the only way that he has to grab to the vehicle is to hold tight the handlers. In terms of weapons there’s a lot to choose.  Two studs shooters, one on each side (that assume multiple angles and retract when necessary), a deadly grapple-hook gun  and a batarang is what batman has to fight back the enemies. 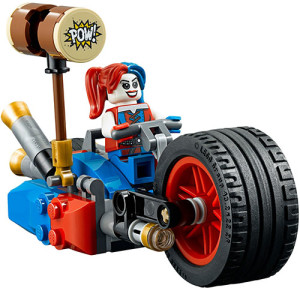 Harley Quinn’s Motorcycle is not so powerful in terms of weapons but it looks also fantastic. The bike uses a nice blue and red color scheme and Quinn has a good piloting position with handlers at the front and the big side Hammer next to her, ready to smash anything that comes around. Near to the black wheels, there are also four bug

pipers that give the cycle a real cool look.

In terms of mini-figures, all of them look fantastic but I guess that is impossible to remain indifferent to Deadshot and his stud shooting bazooka. With his nice red suite, this guy features also a small jet pack that allows him to play and chase batman.  With a retail price around the twenty dollars, this set is already available on stores. Enjoy it1