The big Batcave that was unveiled a few days ago was officially revealed by Lego, precisely in the 50th anniversary of the TV Series, showing a huge set with plenty of elements and details to enjoy and a lot of stuff to play with!

This Fantastic DC Comics Super Heroes set has exactly two thousand five hundred and twenty six pieces and, as you can see by the pictures, features a two level batcave, an helipad, the Waine Manor Section, three vehicles (a batmobile, a Batcopter and a batcycle) and nine mini-figures (Batman, Robin, Bruce Wayn, Dick Grayso, Alfred Pennyworth, The Joker, Catwoman, The Riddler and The Penguin) with an endless number of accessories.

The Batcave will be available on retail next March with a price around the two hundred and fifty dollars. Have a look at the press release and official presentation video: 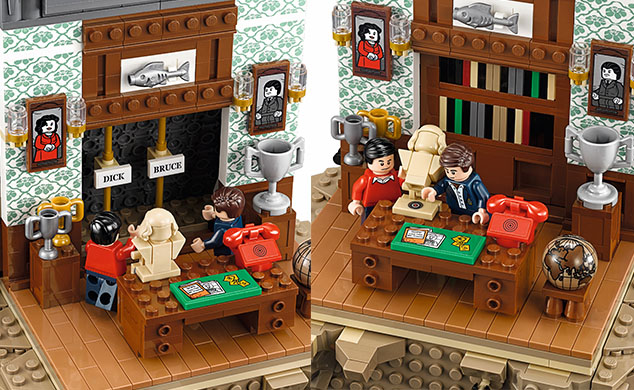 Available mid-February to VIPs, everyone else 1st March.

Drive the villains out from Batman’s Batcave!

Help Batman™ and Robin™ to drive the villain intruders from the Batcave, featuring a Bat Lab with Batcomputer, plus the Batmobile with stud shooters, Batcopter with flick missiles and the Batcycle. This special model, based on the classic 1960s TV show, also has a Wayne Manor section with an exterior wall to climb on and Bruce Wayne’s study featuring the iconic Batphone and a false bookcase that slides open to reveal the secret entrance to the Batcave. Before spiraling down the Batpoles into the Batcave, change identity from Bruce Wayne™ and Dick Grayson™ into Batman and Robin (separate minifigures included).

This LEGO® model of the Batcave as seen in the classic 1960s TV series features 2 Batpoles for Batman™ and Robin™ to slide down, a selection of Bat-gadgets, helipad, plus a Batmobile and Batcopter.

The Wayne Manor section of the model features Bruce Wayne’s study with the iconic Batphone, a hinged Shakespeare bust with secret button underneath, sliding false bookcase to access the Batpoles, and assorted elements including decorated wallpaper bricks, wall lamps, framed portraits, a framed fish and trophies. It also includes an exterior wall for climbing, with an opening roof for easy access to the Batpoles and an aerial element.

The Batcave incorporates a hi-tech, 2-floor Bat Lab with Batcomputer element and a variety of detachable accessory elements, including a lie detector machine, table, chest of drawers, Bat-gadgets and test tubes with translucent elements. Also includes the iconic Batcave entrance for the Batmobile and a helipad for the Batcopter.

The Batcopter has an opening cockpit for a minifigure, bat-inspired wings with 2 flick missiles, spinning rotors and a spinning propeller. A villain minifigure can grab onto the back of the Batcopter for more aerial battle action.

The Batcycle features a driver’s seat for Batman™, translucent headlight element and a sidecar for Robin™.

Weapons include The Joker’s TNT, Catwoman’s whip, The Riddler’s TNT and The Penguin’s umbrella.

Includes separate minifigures for Batman™ and Robin’s alter-egos, so enter the secret doorway as Bruce and Dick, and slide down the Batpoles as LEGO® DC Super Heroes!