Let’s have a close look at this new Crossbones’ Hazard Heist. It isn’t particularly big, having only one hundred and seventy nice pieces, but it definitely shows, in my humble opinion, a great vehicle with fantastic details and some nice mini-figures to enjoy.

As you can see this new Marvel Super Heroes set features a small 4×4 truck with an awesome color scheme, mixing orange brown and black, a small motorcycle, a flying object and three mini-figures (Black Widow, Crossbones and Falcon) with plenty of accessories and weapons.

The 4×4 surely caught my attention. With a square design, it shows a high suspension and big wheels (of different colors) capable to surpass anything that appears ahead. At the front, the hood is completely flat with no studs and shows a couple of interesting stickers with two crosses bones. The windshield is a mix of glass and brown bars which looks great and in place of the rear mirrors, there are two big shotguns ready to fire!

The pictures for now don’t show, unfortunately, the best angle of the interior but I’m sure that there will be plenty of space for some handlers and for Crossbones. The roof is only covered at the back, and just on top of it, there is a big powerful weapon containing a couple of stud shooters and two flick fire missiles on top. 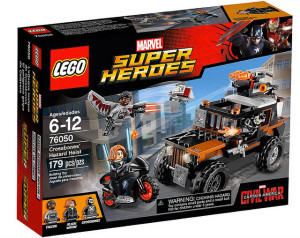 The high speed motorbike for Black Widow is also a new model featuring plenty of stickers all around but this time I think that they look really cool in the bike. In terms of mini-figures, like most of the times, they’re very detailed and surely a great addition to any collection. Overall, this set looks a pretty nice deal. It shows an unusual 4X4 truck with plenty of playability, a real cool motorcycle and lots of action all around. The set should be on retail next April with a price around the twenty five dollars.