The Iron Skull Sub Attack is a new Marvel Super Heroes set with around three hundred pieces that has recently hit stores. It might not be the prettiest Lego set at the first glance, but if you look closely, it definitely features a lot of nice details to enjoy!

Besides the black submarine that shows also a big red cage, stuck with a chain, the set features also a small green Scuba and four mini-figures with additional accessories: Scuba Iron Man, Scuba Captain America, Iron skull, the guy of the submarine and finally Hydra Diver.

The submarine is mostly built with black pieces and the red studs and the stickers make definitely a good contrast. At the stern, the cockpit seems considerably large and the top opens easily, increasing the playability and the access to the interior. Here we can find the usual: a seat for Iron skull, and the sub handlers, in this case, a steering wheel. 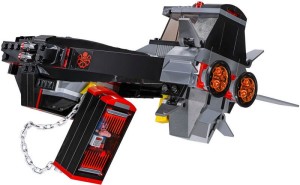 The engine seems to be placed at the back, next to the rudder, and the two orange circles (propellers?) surely give it a very powerful look. Right in the middle of the ship, a big empty space ensures that there’s enough room for the big red cage where Iron Man is trapped. The cage can be dropped, through a sort of trap door but it is still stuck to the sub with a long chain, so Iron Man will have a double task to release the guy!

Nearby, on both sides, there are also a couple of red stud shooters, ready to be fired immediately. Next to it, a small compartment ensures some additional ammunition in case of need. Finally and looking to the front of the submarine we can see a fearful expression with red eyes and plenty of teeth, that definitely looks pretty scary.

On the other hand, the Skuba is very small, compared with the sub, but it shows all the essential features: a place for the pilot, some handlers, a propellant, and even a couple of harpoons ready to be fired. The mini-figures as you can see in the pictures look simply awesome and are an extra reason to achieve the set. 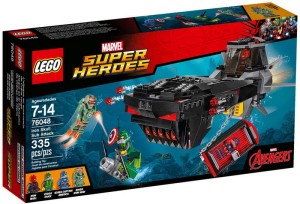 Overall, this looks a pretty interesting marvel set with some nice elements to enjoy. The submarine takes all the attention but the little scuba and the mini-figures have also an important role. The set is already available on market and should retail around the forty dollars.