The Black Panther Pursuit is a new Marvel Super Heroes set that has recently hit stores. It’s not very big, but it definitely shows a lot to enjoy, featuring a 4×4 vehicle, a black jet, a motorcycle and three mini-figures (Winter Soldier, Black Panther and Captain America) with assorted weapons, in a total of two hundred and eighty seven pieces.

I like this pursuit to Winter Soldier! The air jet has some extraordinary shapes and a great color scheme mixing the black with a few purple lines and lime inside the cockpit. Right at the front the sharp piece remembers a bird’s beak and just next to it, Black Panther has a huge cockpit with a long windshield that opens easily, giving total access to the interior.

Inside, besides the controls and a seat, there is also what it seems to a red extinguisher. The jet is incredibly short and the wings (which have each one a stud shooter) are easily confused with the central structure of the jet which is awesome in terms of design. The tail is also very simple and shows only a small stabilizer at the back.

Captain’s America 4×4 is a naked vehicle, but don’t get me wrong, it’s a very cool car. Showing a raised suspension and big tires, it has at the front an unusual spring loaded shooter (triggered inside the cockpit), ready to be fired against winter Soldier. The driving seat is quite unpleasant (the windshield was substituted by a grid and the trunk has nothing but a couple of task force stickers and lots of available space. 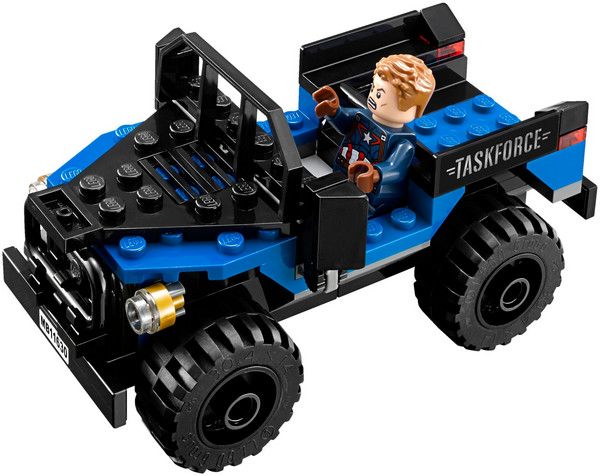 Finally a word for the motorbike, which at the first glance isn’t very powerful and as you probably noticed it’s a model used on plenty of other Lego sets. The mini-figures aren’t the coolest but all of them have some really nice printed details. Overall it’s absolutely a very interesting set with plenty of playability for a decent price, around thirty five dollars! Enjoy it!