The Heroes of Justice: Sky High Battle is a new DC Comics Super Heroes set that will hit stores in the beginning of the year and the first one, of this wave, to surf in the internet. It’s big, with more than five hundred pieces and features a new Batwing, a green helicopter and five mini-figures: Batman, Lex Luthor, Lois Lane, Superman and Wonder Woman.

The set box picture isn’t the best (it’s the only one available for now…) but it’s possible to see that the new Batwing is the head vehicle of this box and it definitely brings a lot of nice features to enjoy! 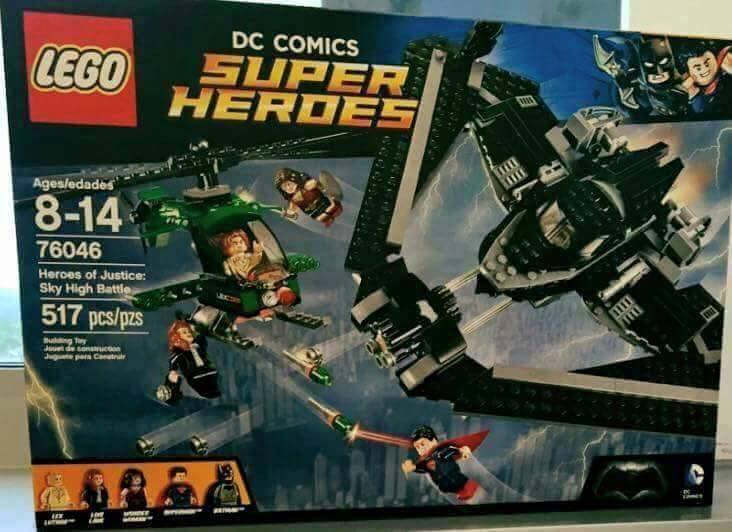 Having a look at it, it seems built, only and as usual, with black bricks, and it is considerably large. The cockpit, in the middle, has more than enough space for batman and a few handlers and the engines at the back seem to be made with plenty o small pieces which alerts for some potential awesome details. The mystery for me is the front part which according to the picture seem to detach from the rest of the vehicle. If it’s true it’s simply fantastic, not to mention the fact that it has also a big stud shooter with six ammunitions.

The green helicopter seems small at the first glance but it is surely quit armed. The cockpit occupies the most part of the space and is protected by a big windshield and below, a couple of flick fire missiles are ready to shoot against the batwing. The propellers and the landing gear are in line in terms of size, but there seems to be a nice feature on this last one, that consists in a small bar where a figure can easily grab. 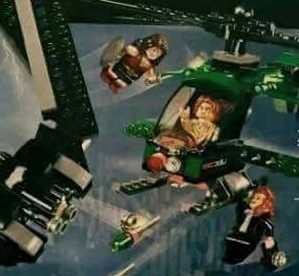 In terms of mini-figures, I must say that they didn’t excite me much but as always they’re nicely accurate. Globally, it’s another set with a batwing that independently of its features, I‘ll probably pass. The Heroes of Justice: Sky High Battle should be available next January with a retail price around the sixty dollars.