The Kryptonite Interception is a new 2016 DC Comics Super Heroes set that will be available in the beginning of the year. It brings three hundred and six pieces and shows the new Batmobile, a forklift containing some Kryptonite and three mini-figures, Batman and two Lexcorp guys.

The Batmobile looks pretty cool! Built with plenty of small black pieces, it presents sharp shapes on almost every part and some interesting features to enjoy. Starting by the front, it shows, up on the hood, a double stud shooter ready to fire against the corporation forklift.

The cockpit seems to be quite long and with space for Batman and for the Bat handlers. At the back the batwings are nicely discrete and the back wheels are considerably larger that the front ones. Unfortunately at the moment there are no additional pictures of the vehicle, so it’s kind of impossible to observe and talk about additional details or features.

The forklift is similar to its City brothers and shows the usual black bars protection for the driver and a couple of stud shooters, one on each side, At the front, it also brings an additional pallet with Kriptonite on it (the barrels aren’t very heavy, so I think that it won’t be a problem for the lift mechanism…) that Batman will surely try to recover. 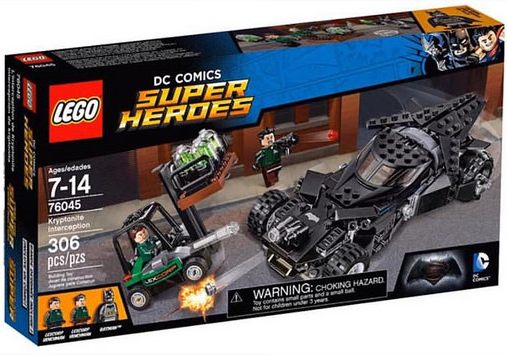 Globally, this is absolutely a very interesting DC Comics sets with plenty of action and playability.  The green and black Lexcorp Hanchmen suits look really cool and Batman is always an added value in the collection. The set should be available in the beginning of 2016 with a retail price around the forty dollars.