Two things immediately caught my attention. First, the new big black and printed plates used for the entire airstrip. Second, the four big engines that can be triggered manually with a lever placed at the back ,or just by adapting a power function kit, which according to its designer seems pretty easy!

The list of micro scale vehicles is also extensive and seems quite pleasant to build. It includes a couple of forklift trucks, three micro scale Quinjets, three fighter jets, two runways, four road blockades and finally a gasoline truck. But if we’re talking about playability, I can’t imagine how exciting it would be to build the entire model.

Inside and below the airstrip plates, the command center is highly detailed with lots of micro control panels, with an entire room prepared to receive all the micro scale guys. Outside the superior control tower is also quite impressive, featuring a big windshield and a considerable number of different antennas. 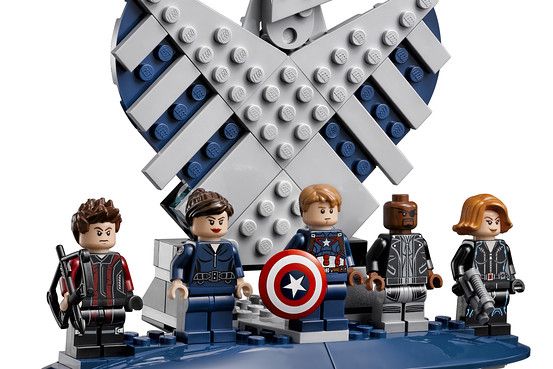 Globally the set is absolutely outstanding. For most of us it’s won’t be easy to get it, after all it will cost around three hundred and fifty dollars but it surely worth it! The details, all around the carrier, are huge as well as its features and I’m sure those who have the opportunity and money won’t certainly pass by this set without achieving it!

Have a look at a few additional details in the gallery and press release:

Take on the challenge of building this awesome LEGO® model of The SHIELD Helicarrier. Construct the flying aircraft carrier with 2 runways, microscale Quinjets, fighter jets and ground support vehicles. The set also comes with many of your favorite LEGO Marvel Super Heroes minifigures, plus 12 microfigures to display on deck and within the highly detailed interior. Includes 5 minifigures: Nick Fury, Black Widow, Captain America, Hawkeye and Maria Hill.

Includes a plaque with facts about The SHIELD Helicarrier

Add lights and spinning rotors to the Helicarrier with the 88000, 8883 and 8870 LEGO® Power Functions sets (sold separately)

Rotors can also be turned manually