The Ant Man Final Battle is a new Marvel super Heroes set with exactly one hundred and eighty three pieces that will hit stores next summer featuring a bug with a couple of big wings, three mini-figures (Ant-Man, the Yellow Jacket and Hank Pym) and some additional accessories like for instance the super jumper piece, a couple of small spiders or a sort of catapult with two screws.

At the first glance, I would say that it’s not easy to like this set. The playability is quite reasonable with a couple of stud shooter and the catapult, however, the main attraction is not properly a must in terms of beauty.

The bug’s small body is the part where all the rest will be attached and at the same time, on top, it also has space for a seat for Hank Pym. The head, at the front, which can easily move right and left, seem to be built with plenty of small pieces and shows a couple of small black claws.

The six longs legs are also placed just below the seat and just like the head, they seem to easily assume several positions. The wings, which are definitely the most impressive part, are considerably big, compared with the rest, and are attached to the body with a small mechanism that allows them to move in different directions. 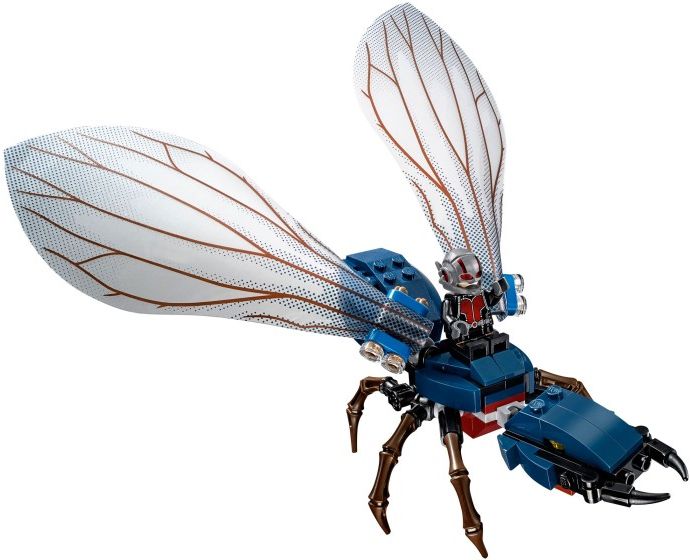 The mini-figures are surprisingly detailed especially if we attempt to Yellow Jacket and his suite. Overall I would say that this won’t probably be the most appellative set of the next Super heroes’ wave. The mini-figures are huge but unfortunately the bug didn’t convince me at all. Have a look at the gallery: