What a great set, I’m completed excited with these two vehicles! Joining playability with some really nice details, the new Avengers Hydra showdown is a small Super Heroes set  with only two hundred and twenty pieces and feature an off road car, a buggy and three mini-figures (Thor, Hawkeye and Hydra Henchman) with a few accessories that include a new super jumper function.

Starting by Hawkeye’s off road vehicle, it looks absolutely brutal. With a raised chassis and big wheels it has a pretty long engine with a protection bar just at the front. The cockpit at the first glance looks a bit empty (it has no doors or roof – on top of the driver – and brings only the usual steering wheel) but looking closely it has some really nice stuff to play with.

At the back, there is what it seems to be an empty compartment with a connection to the cockpit and surrounded by glass and just aside it two clips ensure that a few accessories may be easily stores. Finally, the best part! On the top, there is a nice rotating platform with two flick fire missiles and ready to shoot against Hydra and his Buggy. 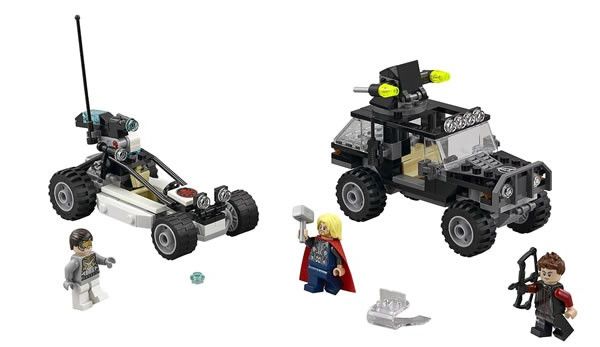 And the Buggy is definitely in the same level in every aspect. It looks agile, fast and the big weapon on top seems to be huge in terms of fire power (the new stud shooter mechanism will ensure that…). The wheels are placed on the edges and the cockpit is protected by a black solid structure, just like in real models. The engine which isn’t very clear for now is placed at the back, just behind the cockpit. 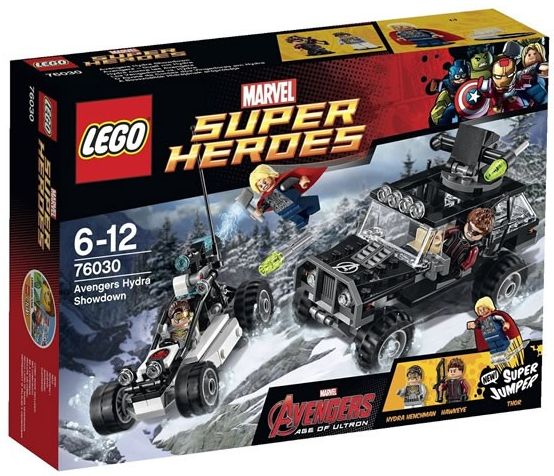 The mini-figures are also another reason to achieve the set. With nice detailed bodies, they feature, besides their weapons, a new jumper brick that is suggested for Thor but can be used obviously by the others. Globally, I would say that this is definitely one of the most interesting Super Heroes set of this new wave. The Vehicles are huge in term of playability and the new Jumper seems to be a really nice feature. The set should retail around thirty dollars and will be available next spring.