The Iron Man vs Ultron is the entry of the new wave of Super Heroes sets that will start retailing next summer. The box has only ninety bricks that feature four mini-figures (Iron Man, two Ultron Sentry, and an officer), a flying object for the Ultron army and a few accessories that include the new stud shooters and the new Jumper piece.

The building experience is for obvious reasons almost none but the four mini-figures definitely can be once again a good reason to increase the figs collection, for a good price, especially Iron Man that is absolutely one of most wanted Marvel super heroes’ figures.

Ultron’s Space Ship is built with two green shades and isn’t in my opinion particularly enthusiastic. The small wings can move up and down easily, assuming different angles and the officer’s piloting position is placed just at the front (the legs are separated from the body and attached into a lower position).

The tail has a couple of long and curved pieces and besides its design, I think that it doesn’t have any extra features to add. In terms of weapons there could be slightly more, I can only figure out a small cannon, placed on the right wing. 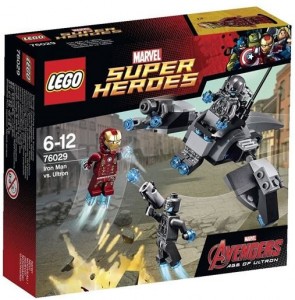 The mini-figures are definitely the best part. Iron Man has its traditional dark red suit with the golden mask and the grey Untron Sentry soldiers bring besides their high detailed torsos a couple of new stud shooters that definitely add a new flash of playability to the set. Overall, for around twelve dollars, it’s just an entry set with a good opportunity to get new mini-figures without spending too much.