The Darkseid Invasion is a new DC comics super heroes set that will hit stores in the beginning of 2015. With five hundred and forty five pieces, this large size set brings a nice aircraft, “just brought from star wars”, a black platform with a huge cannon and five mini-figures: Green Arrow, Darkseid, Superman, Hawkman and Cyborg.

Darkseid has for me the best feature: a big and huge cannon that can fire a red ball with power enough to easily take down every guy that appears ahead. This massive destruction weapons is mounted up on what it seems a black aircraft with three antigravity waves that allows it to move fast.

The white spaceship looks incredible beautiful and considerably big. Mostly built with white bricks, it has a long nose that extends until the cockpit. With a big blue windshield that opens easily, inside we can find some handlers and a small seat for Green Arrow.

At the back the wings’ edges seem to be capable of changing position and the couple of engines ensure all the power to move the vehicle and fight back Darkseid. Below the cockpit we can find a couple of flick fire missiles that in my opinion are not enough to defeat the big cannon. 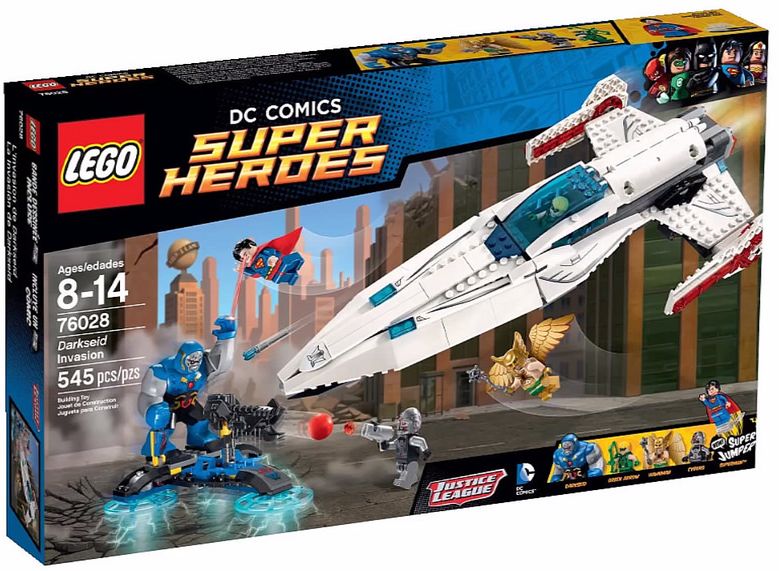 The mini-figures are also an extra reason to get this set. Despite the many supermen that we can find, Cyborg looks really cool and extremely detailed just as Hawkman and Arrow. Globally the big question is: They all look cool but do they worth sixty dollars? The word to the fans!! Enjoy the pictures!