The Black Manta Deep Sea Strike is a new Super Heroes set that brings all the necessary ingredients for an awesome water battle. With exactly three hundred and eighty seven pieces it features a bat submarine, a sub aquatic vehicle for Black Manta, an Atlantis ruin and four mini-figures (Black Manta, Aquaman, Batman and Robin).

The Black Manta submarine looks pretty nice! It has the shape of a fish and features some really interesting details. The first one is the color scheme that mixes black with red and has its bigger expression in the unusual red windshield with several faces placed just in the middle. The glass opens easily and gives access to the cockpit where Manta has all the stuff to handle the ship and fight Batman.

Outside, just at the front, the sub brings a couple of flick fire missiles that together with the black shark seem to be the only weapons to defeat the bat sub. The symmetric shapes show two long membranes placed aside the cockpit with a couple of pipes connected to the back that seems to be exhaustion part of the mechanism to move the vehicle. 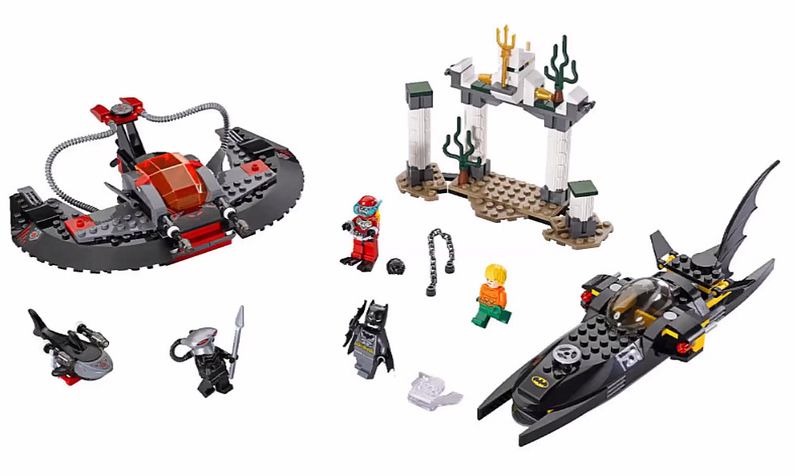 The Bat is long and narrow, but this doesn’t tickle any of its beauty. Mostly built with black bricks, it shows at the front a long nose with a bat logo and a round lever which might indicate some kind of feature below it. Just next to it, the cockpit isn’t big but has the essential, and can be easily accessed by opening the round windshield. Just aside it, there are two flick fire missiles which I guess that are the only weapons to fight back Black Manta. At the back, the black bat wing looks pretty nice and gives the sub the appropriate balance. 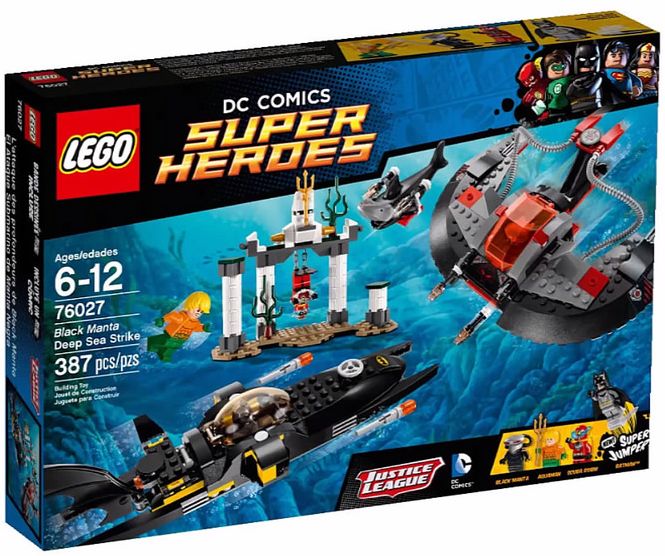 Having a look at the Atlantis ruins, it is very simple and constituted by four columns that include a small chain attached to the top and ready to grab Batman and deliver them to Black Manta. Globally it looks a pretty nice set, especially for those that really enjoy this theme. The two aquatic vehicles are definitely very interesting, I’m especially anxious to see additional pictures about the bat sub, and the four mini-figures are absolutely an extra reason to achieve it. Batman has also a Super Jumper feature which left me quite curious to see more details. The fifty dollars that it will cost seem reasonable and in line with the rest of the theme.