Despite being available on stores since the beginning of the year, only a few days ago I had the pleasure to see it built and my impressions were definitely very nice, especially when we look to the two distinct cockpits and of course to the two exclusive figures, Power man and the returned Mary Jane Watson, spider-man’s girl-friend.

The set features three hundred pieces and as you can see through the pictures, it brings a great spider Helicopter, inspired in the Spider Man Video Game, a small but fearful glider and four mini-figures: the big Green Goblin, an usual Spider-Man, Mary Jane Watson which has been completely redesigned and finally Power Man, a new and exclusive guy.

The set’s highlight is obviously the heli, which uses,

mainly, the traditional spider man color scheme, blue and red, and presents a couple of really nice features to play with. First of all, the cockpits placed at the front are quite rare and simply amazing, the front one, with a small black nose is slightly bigger but both have enough space for the handlers and a wide windshield that opens easily. 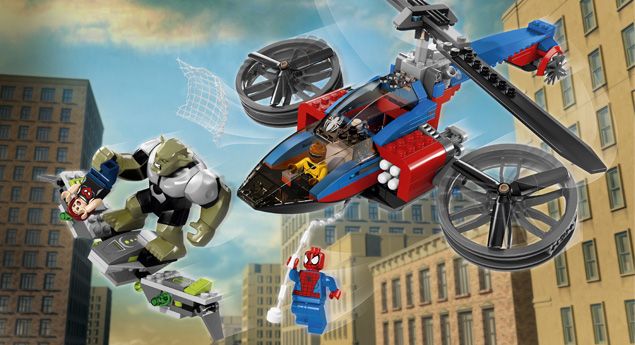 Both sides are symmetric however there are a couple of differences between them. The spinning rotors that can assume multiple positions are the same, however in terms of weapons there are some major appointments. The four flick missiles of the left give room to a nice web net launcher on the right ready to catch the big Goblin. On top a big propeller with two blades ensures the correct balance when it’s time to fly. Finally in the second cockpit, there is a great mechanism that allows spider man to be released through the bottom and swing with a web to rescue his girl-friend.

Having a look at the glider, it is built with many small pieces of several colors and a few stickers which gives it a very robotic look. In the middle, Goblin has a small platform to handle the vehicles and just below it a couple of flick fire missiles launcher gives the glider all the power to fight back the heli. 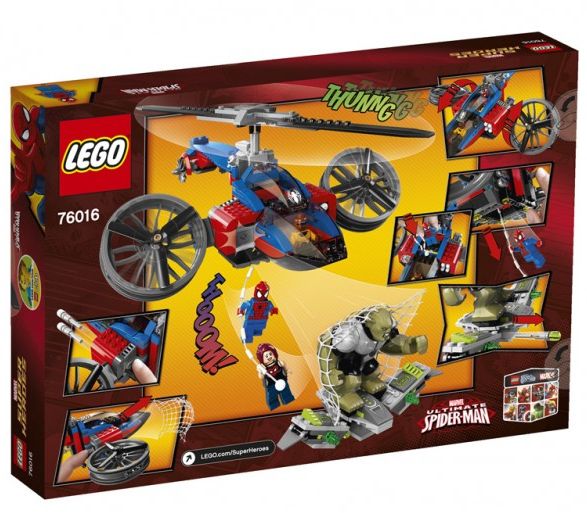 Overall, this is absolutely a really nice set. It brings plenty of action, a really nice helicopter with some great stuff to play with and four unusual and accurate mini-figures. It is not cheap, it costs around forty five dollars, but none of super-heroes kits is. Have a look at the pictures and enjoy!