The Doc Hoc Truck Heist is an interesting Marvel super Heroes set that will be available next April. With a total of two hundred and thirty seven pieces, it features a really nice high security truck, a small platform with a lamppost with a small wall and a white web and three mini-figures: Doc Ock, Spider-Man and a Truck Driver.

Well, I think that it’s not hard to guess what’s going to happen, Doc Hoc with his three long arms will make everything to steal the Bank truck while superman and the officer will try everything to avoid it.

The set’s masterpiece is obviously the truck which has some really interesting details on every part. Its wheel are bigger than usual as well as the suspension which is slightly raised, at the front, the grid ha a couple of black protection bars which gives the vehicle a quite sturdy look and among such a black area, the yellow plate looks a bit strange but after all is normal in this theme’s vehicles.

The cab, despite the usual size, looks quite interesting mostly thanks to the windshields, constituted by two separate parts with glass everywhere and of course the two green side doors that are always an added value to these vehicles. Just above, the white roof seems easily detachable and presents four orange emergency lights. 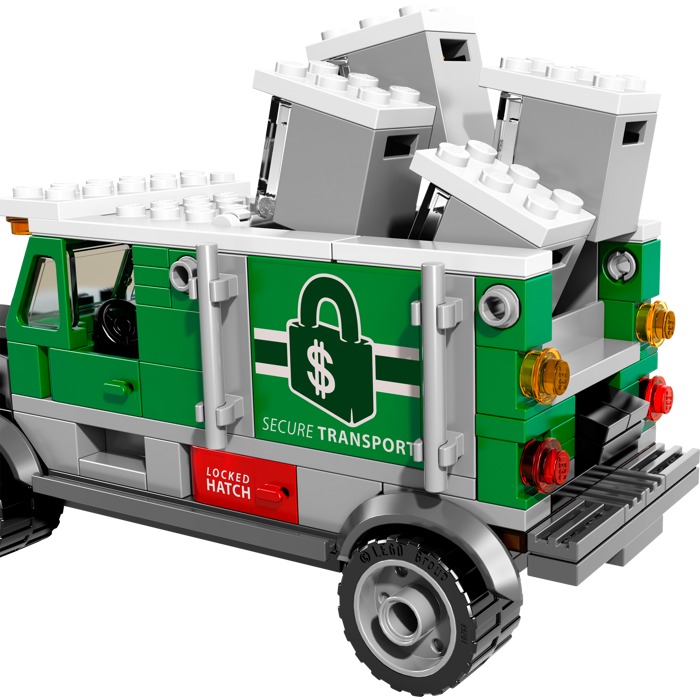 Behind the cab, is the product that Doc Hoc will try to steal. Four small money safes, with some cash inside, are terribly arranged in the trunk which being considerably large, doesn’t have for sure enough space for such a quantity of values. Looking at them, Doc Hoc won’t have much difficulty to grab a couple of them. Finally a quick note to the red door just below the trunk, I wonder what’s inside…

Talking about this guy, despite the accuracy of the other two, it looks absolutely nice with three long arms attached to the back with tweezers in the edges and plenty of dynamite to blow the truck. The driver and the superman are ordinary figures present in many other sets but, they still, of course, two good elements especially for those who don’t have many marvel sets. 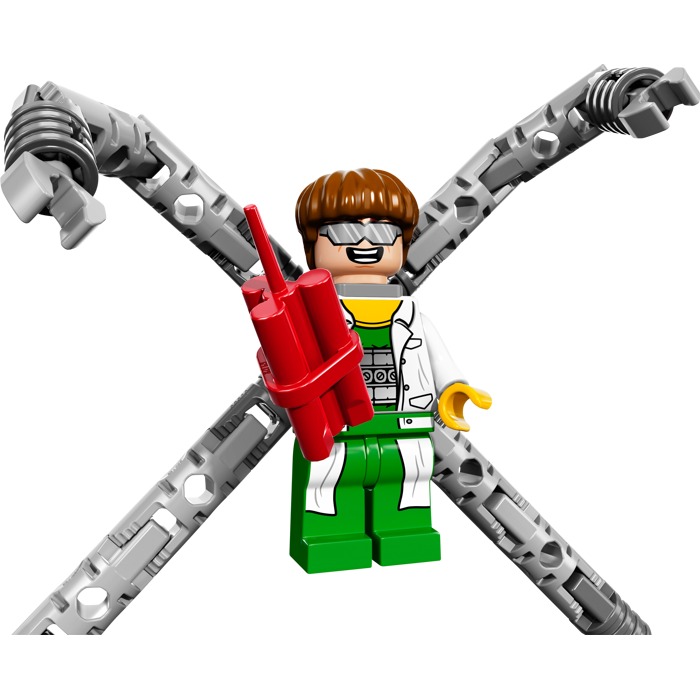 Globally I like it. The truck looks pretty nice, with some really nice stuff to play with the small streetlamp is always a good addition to any town. The three mini-figures, especially Doc Hoc, are also quite accurate, being a good acquisition to any collection. Twenty five dollars is the expected price, and if it’s true, it looks a good value, after all we’re talking about a set of one of the most expensive themes. Enjoy the pictures!