The Iron Man Extremis Sea Port Battle is a new Super Heroes set with exactly one hundred and ninety five pieces. And for about twenty dollars you get a great high speed boat, three nice mini-figures (that are Aldrich Killian, the Iron Man and War Machine), a comic adventure book, typical in superheroes sets and a red buoy that looks like a sort of water base for the War Machine.

This is another set that it’s hard to believe in the pieces’ quantity that it announces because when I look at the pictures, the boat doesn’t look that big to justify the number of bricks. However, despite this issue, the boat, aesthetically speaking, is really awesome. Built mostly with black and dark green pieces, it is quite long, aerodynamic and it has some quite interesting features.

Starting for instance for its long bow, it has a great windshield that protects a big cockpit for Aldrich. Inside, there is plenty of space for a decent seat, a steering wheel and a couple of flick fire missile launcher which I think that can be triggered through the back. At the stern there are a small roof the hides the missile launcher and opens easily every time it’s necessary and also a powerful engine to run from Iron Man. 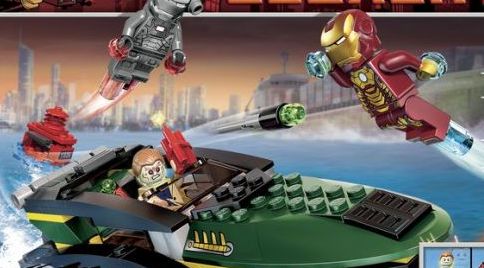 Having a detailed look to the mini-figures, I would say that they simply great. The War machine, which looks exclusive of this set, is a sort of grey version of the Iron Man and its mask is exactly the same. 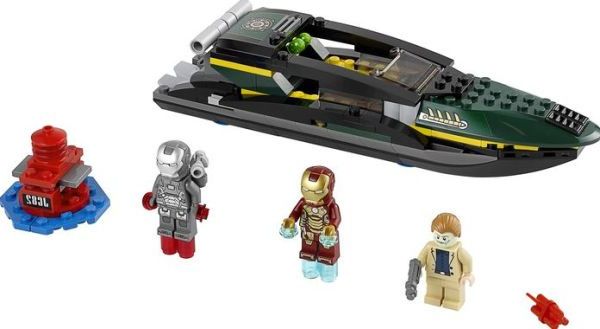 The Iron Man is perhaps one of the greatest mini-figures of the actual sets and Aldrich Killian is also quite accurate. All of them have a bunch of weapons with especial relevance for Aldrich that besides the pistol has also some dynamite to blow the Iron Man. 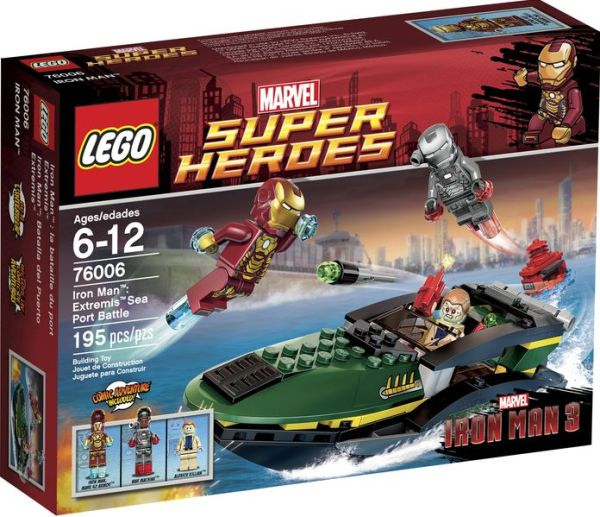 Overall, it looks a good set for a nice price, according that we’re talking about a superheroes’ set which normally are always a bit more expensive than all the rest. The playability isn’t much but the high speed boat and the three mini-figures worth definitely the price.