These are definitely great news for the Harry Potter fans. Lego has just revealed a new Harry Potter set, the Hogwarts Great Hall (75954), which gives total credit to the rumors that said that this theme would return in 2018. 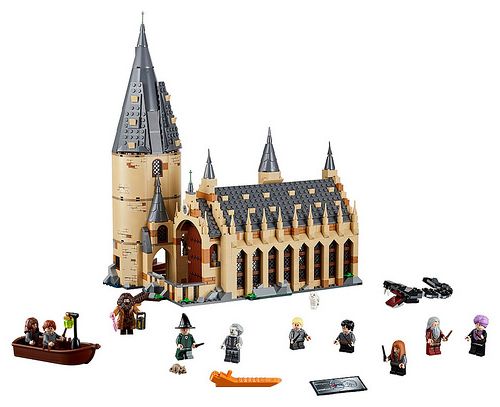 Outside, the images speak for themselves, there are plenty of nice small details, sloping shapes and a great color scheme. Inside, the playability in on a high level with lots of stuff to enjoy not only in the several levels of the big tower but also in the big room where it’s possible to find according to Lego, a table with seats, a fireplace, two reversible house banners and four floating candles, some food (turkey leg, ice cream and a small cake) brooms, a trophy cup and a teapot. 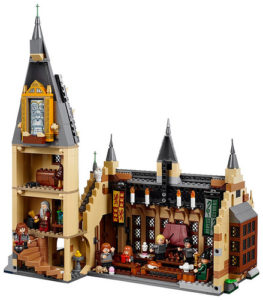 The set, as well as other additional three, should be available only next august with a retail price around the hundred dollars. Mean while, have a look at the pictures and official press release: 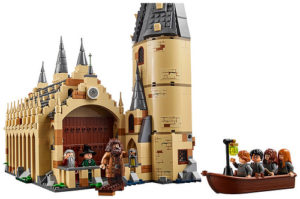 Welcome to magical adventures at the Great Hall at Hogwarts! 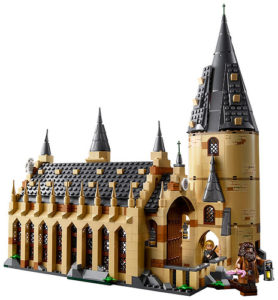 Features the buildable Great Hall and a tower.
The Great Hall features tables, head table with seats, fireplace, 2 reversible house banners and 4 ‘floating’ candles, food (turkey leg, ice cream and a small cake) brooms, trophy cup and a teapot
The 4-level tower features movable Grand Staircase spiral steps at its base, potions room, treasure room with chest and a turret featuring the Mirror of Erised with changeable pictures and roosting spot for Fawkes.
Also includes a boat with hanging lantern.
Place the pupils in the boat and sail to Hogwarts Castle.
Help Hermione and Susan create magical potions.
Feast in the Great Hall, then use the sorting hat to select the pupils’ houses!
Welcome the new students with Hagrid, Dumbledore and Professor McGonagall.