The Dilophosaurus Outpost Attack is a new Jurassic World set with two hundred and eighty nine pieces that will be available soon on retail. Despite not having vehicles, this Outpost shows a really nice structure with some features to play with, the fearful Dilophosaurus and three mini-figures with the usual accessories.

The Outpost is composed basically by three distinct parts: the electrified wall with a crane, the main gate and finally the watch tower. The crane is absolutely a major point on terms of playability and it’s mounted on top of a wall with long electric bars, capable of stopping the Dinosaur of getting inside.

In the middle, the gates seem big  (but looking at the set box, not very sturdy…)  and show some really nice details: spot lights on top, red/green lights on the side columns and finally what it seem a sort of lever to open and close them whenever it’s necessary. 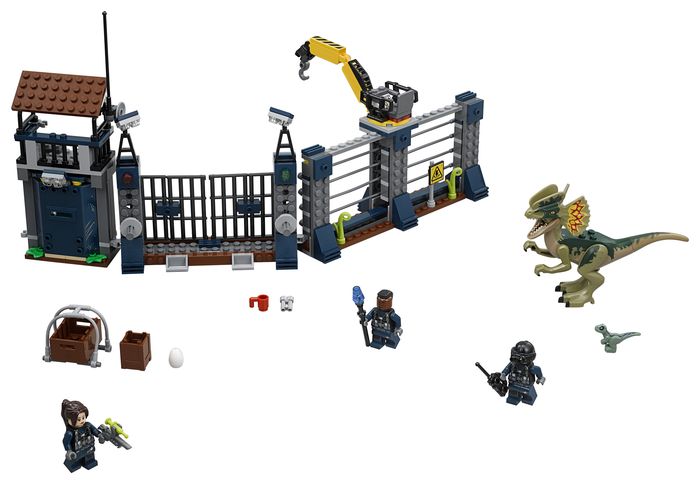 On the left, the watch tower has a sort of armored door with a small opening in the middle, and on top, a small balcony for the guards with some extra lights and a communication antenna. All elements are also nicely attached and can assume multiple positions. Finally, a word for the beast and its baby that are nicely designed and printed. 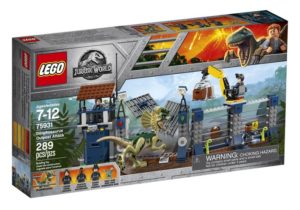 Globally it’s a great addition to the theme. The creature looks great as well as the three accurate mini-figures and inside, the outpost has some nice elements to enjoy, namely the tower and the crane. The set should be available next month with a price around the thirty dollars. Enjoy it!