The Blue’s Helicopter Pursuit is a new Jurassic World set that will shortly be available on retail. With a bit less than four hundred pieces, it features a nice blue helicopter with some nice stuff to play with, a quad bike with a trailer, a sort of cage with food inside and three mini-figures with assorted accessories.

The helicopter, despite having a usual design, looks pretty nice in my opinion. The cockpit has plenty of light with all those tiny windows, and inside the pilot has a decent seat to maneuver the machine as well as the usual handlers. This time the roof is not so easy to detach, being necessary to remove first all the engine and propeller parts.

Behind the cockpit, there is a bigger compartment with space for two guys, and a hole for the outside with a seat for the hunter to fire the big stud cannon against the beast. At the back, there are two interesting features: a small winch to transport the cage and a small space to store a box with the Dinosaur’s egg. 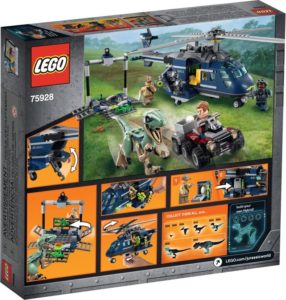 In terms of engine and propellers, the heli looks pretty sturdy. The top is built with many small pieces, which gives it a nice and detailed look and the propellers not only are slightly bigger than usual but also can be triggered though a small knob near the landing gear, which is awesome in terms of playability.

The Quad bike has a nice color scheme and doesn’t seem much different from previous models but shows a really nice improvement: a small trailer that according through the images is responsible to transport the small egg. This small vehicle and the Dino’s Cage are absolutely two nice additions! 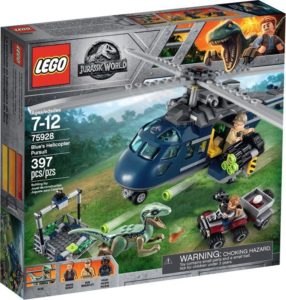 Globally it’s absolutely a pretty nice Jurassic World set. The Heli looks great, not only in terms of design but also if we attempt to its playability, the characters are as always nicely accurate and best of all, will retail around the forty bucks which looks fair. Have a look at the pics and enjoy it!