The Pteradonon Chase is a new Jurassic World set that has recently been revealed by Lego on this year’s New York Toy Fair event. And for a fifteen dollar set, it looks pretty cool featuring a chase car with some nice features to play with, a pteranodon figure and two mini-figures (Owen Grady and a Tracker), with hunting accessories.

I like this chasing vehicle. It has a raised suspension with big wheels, capable of surpassing any adverse obstacle and the engine looks also big and powerful. The cockpit isn’t very large and shows only a small windshield at the front. On both sides, this time there are the usual small doors that give the car a friendlier look. 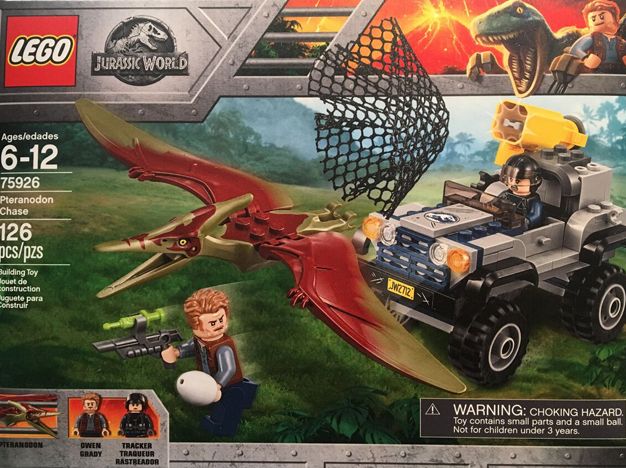 Right behind the driver, slightly above, there is a new weapon, the yellow net launcher, capable of catching objects or animals, considerably ahead of the vehicle. And the pteranodon will surely have to be careful with it! Having a quick look at this little fellow, its shapes look absolutely great as well as the adopted color scheme, a mixture of dark green and red.

Overall it’s a pretty decent entry set. For around fifteen dollars you get a car with a net launcher and two new and accurate mini-figures which seem nice in terms of playability. The set should only be available on April but meanwhile have a look at the set box picture and enjoy!