The Raptor Rampage is a new Jurassic world set that will start retailing next May. It has three hundred and twenty four pieces and a lot of action to play with namely a big sturdy truck, three mini-figures (Claire, ACU and Owen , two dinosaurs which according to Lego have names (Blue and Delta), a small motorcycle and some interesting accessories such as a couple of screens and a really nice movable platform with a couple of weapons to catch the dinos.

Built mostly with a blue and white color scheme, the truck looks pretty tall, mostly thanks to the big wheels and raised suspension. On both sides it features a Vet Unit sticker, showing what type unit this vehicle is. 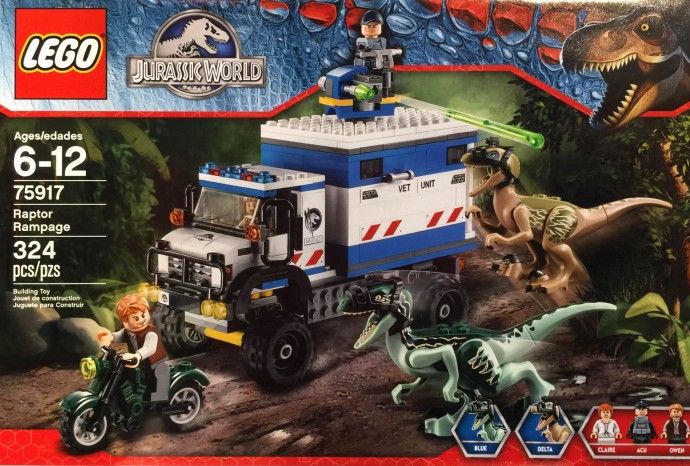 Besides the reinforced chassis, there are several protections everywhere allowing the truck to easily surpass any type of obstacle in the jungle. The cabin however isn’t much different from the usual city trucks, showing the appropriate room for two figures and a couple of side doors. There are lights of all colors everywhere, namely at the front, on the roof and next o the windshield, which definitely breaks the monotony and gives the truck a very cool look.

Behind the cab is placed the vet compartment. It has only one door, at the back, and the two handles that are placed on both sides seem to be a pretty new feature that will allow the dinosaurs to hold it and climb to the top. Will they reach it? I don’t think so because on top of the roof, a small but rotatable platform seems ready to shoot a tranquilizer against any dino that goes nearby. 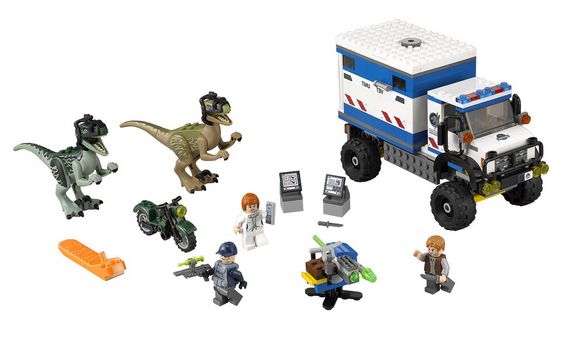 At the back, with the doors opened, it is possible to see a considerable space with a few accessories on both sides to store some tools. The green motorcycle is a known model, present on several themes, namely for instance, super heroes and monster fighters. Having a quick look at the mini-figures they seem, as normally, pretty accurate and with assorted accessories.

Overall, it seems that the Jurassic world has everything to be a success. Particularly in this case, the playability is in a high level with the two dinos, the truck has absolutely some nice and interesting features and the worst part seems definitely the price that should be around the fifty dollars, which being in line with the rest of the theme is, in my opinion, a bit overpriced.